Clash of the egotistical titans…

Global soccer star Zlatan Ibrahimovic has a great deal of respect for the basketball skills of LeBron James, but wishes the Los Angeles Lakers star would refrain from remarking on political concerns. 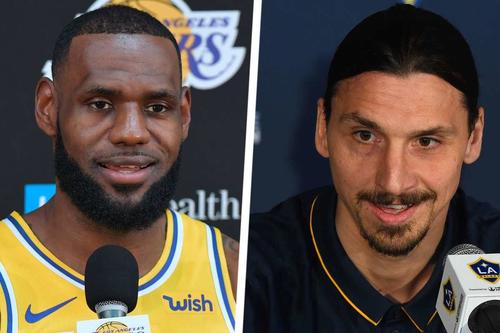 The historically outspoken Ibrahimovic, who’s a striker at A.C. Milan, spoke to UEFA and Discovery+ Sweden to express his opinion that athletes in general should shy away from delving into issues involving politics and cited James as an example.

“He’s phenomenal, but I don’t like when people with a ‘status’ speak about politics. Do what you’re good doing,” Ibrahimovic said.

“I play football because I’m the best playing football, I’m no politician. If I’d been a politician, I would be doing politics. This is the first mistake famous people do when they become famous: for me it is better to avoid certain topics and do what you’re good doing, otherwise you risk doing something wrongly.”

Following Zlatan’s comments, LeBron wasn’t too pleased that someone dared to call him out and fired back Friday night, according to ESPN:

Social injustice. Racism. Systematic voter suppression. Things that go on in our community…

So, there’s no way I would ever just stick to sports, because I understand how this platform and how powerful my voice is…

I speak from a very educated mind, so I’m kind of the wrong guy to actually go at because I do my homework.”

LeBron responded after Zlatan Ibrahimovic criticized him for his activism.

“I’m kind of the wrong guy to actually go at because I do my homework.” pic.twitter.com/VyKgBrYuiz

Daily Caller’s David Hookstead summed things up perfectly: “This is America. Everyone is entitled to their opinions, but being able to score 30 points in an NBA game doesn’t make you an authority on politics.”

Monetary Policy Is Pushing Americans, Kicking And Screaming, Up The Risk Curve

Domestic Violence Calls In The UK Soar During Lockdown