Wall Street – which is now certain that the Democratic sweep will lead to trillions in new stimulus (Goldman yesterday revised its outlook to expect as much as $750BN in fresh stimulus as soon as next month, the first of many) – has to put the champagne on ice (if only for a few days until the backroom negotiations are completed) because as the WaPo reports, “Biden’s plans for a major new economic relief package boosting stimulus payments to $2,000 have run into possibly fatal opposition from his own party Friday as Sen. Joe Manchin III (D-W.Va.) said he would “absolutely not” support a new round of checks.”

Manchin, described by WaPo as “a moderate who will hold great sway in a Senate split 50-50 between Democrats and Republicans” made his views known even as the Biden team worked to develop a coronavirus relief package that would include new stimulus checks, extended unemployment benefits, and much more. The only problem: Biden did not expect one of his own to turn against him in what appears to be the first reversal of the blue wave.

Biden has made new stimulus checks a central promise, specifically telling Georgia voters that they would be getting $2,000 payments if Democrats won Senate elections in the state this week. Little did Georgia’s Democratic voters know that one of their own Senators was about to crash that plan, even though following the Georgia wins, Chuck Schumer also pledged that the $2,000 checks would be an early priority.

The problem is that with a slim margin of just one vote in their majority – one which assumes Kamala Harris will be the Senate tiebreaker –  Biden and Schumer can’t lose even a single Democratic vote if they attempt to move legislation under special Senate rules that allow bills to pass with a simple majority, instead of the 60 vote margin generally required.

Well, Manchin has emerged as just that vote.

As the WaPo notes, “Manchin’s opposition to new stimulus payments could kill Biden’s proposal altogether, or force him to reshape it dramatically. And it offers an early preview of the challenges Biden will face in governing over the next four years even with his party controlling both chambers of Congress.”

“Absolutely not. No. Getting people vaccinated, that’s job No. 1,” Manchin said in an interview with The Washington Post when asked if he would support a new round of checks.

“How is the money that we invest now going to help us best to get jobs back and get people employed? And I can’t tell you that sending another check out is gonna do that to a person that’s already got a check,” Manchin added.

That may be just the start. Biden is also expected to push for additional funding for vaccine distribution, as well as money that will help states and cities, as part of his initial package. Goldman expects the next Democratic stimulus package to amount to $750BN, including $300bn for additional stimulus payments, $200bn for fiscal aid to state and local governments, $150bn to extend both broader eligibility for unemployment benefits and a top-up at an amount that gradually fades overtime, and $100bn in other spending, as shown in the chart below. 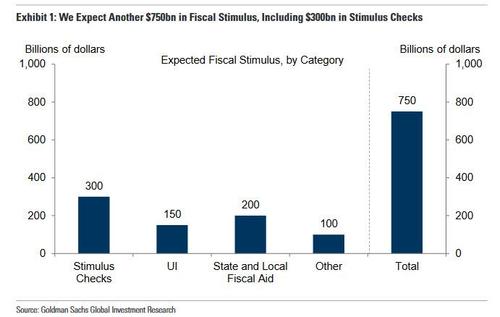 However, without a united Democratic front, Biden will need to attract at least one Republican vote for his proposal and while some Republicans have supported $2,000 stimulus payments, there is scant GOP support for other elements of Biden’s emerging plan, such as extending unemployment benefits. Unless of course Mitt Romney “shocks” everyone and officially flips to the Democrats.

So is this the end of the Blue Wave?

Probably not: one can imagine that the West Virginian – who has now emerged as the most important person in the Senate – will be swayed if and when Schumer throws a few metric tons of pork at him and his constituents. But for now, it appears that what until just moments ago was a guaranteed blue wave is suddenly crashing on the (metaphorical) shores of landlocked West Virginia, and stocks have finally woken up to the new – if temporary – reality. 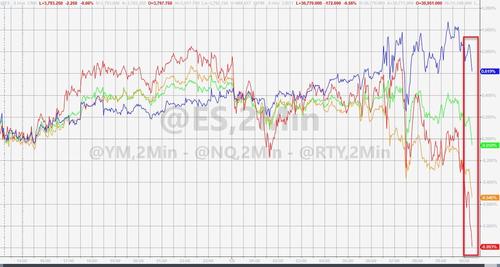