Stimulus negotiations are set to spill over into the weekend, as Capitol Hill negotiations continue to hit last-minute stumbling blocks over a nearly $1 trillion coronavirus relief package ahead of a Friday deadline, according to Politico. Top congressional aides and White House officials add that if a deal isn’t reached, they will need to pass another short-term (24-48 hour) spending measure to avoid another government shutdown on Friday evening. 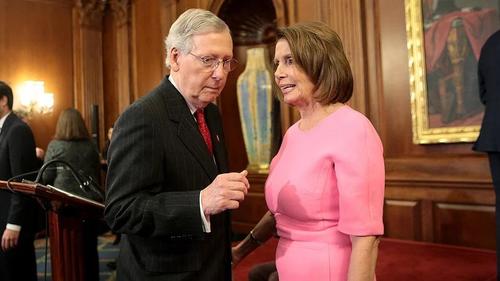 While Congressional leaders continue to talk about ‘progress’, they have not publicly announced an impending deal – which, if isn’t announced on Thursday – allowing a day to draft – won’t get passed by the Friday deadline.

“I’m hopeful, and I talked to the speaker this morning. She thinks we’re making real progress,” said House Majority Leader Steny Hoyer (D-MD) in a Thursday morning appearance on MSNBC. “Hopefully, we will get to an agreement today.”

The House and Senate would both need to approve the year-end funding bill and the coronavirus package, and in the Senate any one member can delay passage. Even if a deal is reached Thursday, it could take a day to draft the legislation.

The coronavirus package will include a new round of roughly $600 stimulus checks, beefed up unemployment benefits of $300 a week, about $325 billion for small businesses and money for transportation, vaccine distribution and schools, according to lawmakers and aides. Leaders are hopeful it will be married with a $1.4 trillion omnibus spending bill funding the government through September.

GOP leadership is pressing back against several Democratic requests in the rescue package – including as much as $90 billion slated for governors to spend on heath-care related concerns which Republicans have called an unnecessary slush fund. Republicans have also opposed a $1 billion pot of money to help FEMA deal with pandemic-related emergencies.

What If Central Bankers’ Prayers Are Answered And Inflation Surges

Why Hardly Anyone Trusts the Virus Experts

Selected Articles: The History of US and British Support to Mussolini’s Fascism