The world got another wake-up call this week about the overreliance on complex, just-(not)-in-time global supply chains. As of Friday, the massive containership, “Ever Given,” remains stuck in the canal, unable to be refloated, paralyzing the world’s most important shipping lane. Ever Given is one of the world’s largest containerships, with approximately 20,000 shipping containers of goods, and it has paralyzed one of the world’s most importantly shipping lanes – a vital linkage between Asian factories and customers in Europe and the US. 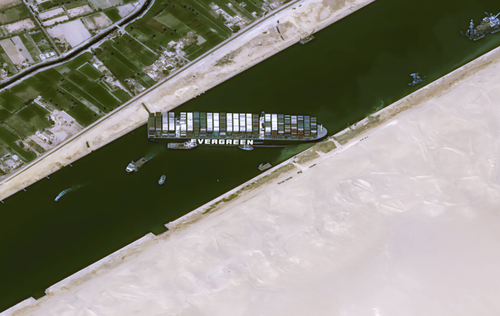 Reuters reports the Suez Canal Authority (SCA) is looking forward to cooperating with the US to refloat the stranded containership that has blocked the canal since Tuesday.

“The Suez Canal Authority (SCA) values the offer of the United States of America to contribute to these efforts, and looks forward to cooperating with the US in this regard,” it said in a statement.

Shoei Kisen, the Japanese owner of the ship blocking the Suez Canal, aims to dislodge the vessel from the canal bank by Saturday. But as Bloomberg reports, the process to refloat the ship could “take until at least next Wednesday.” 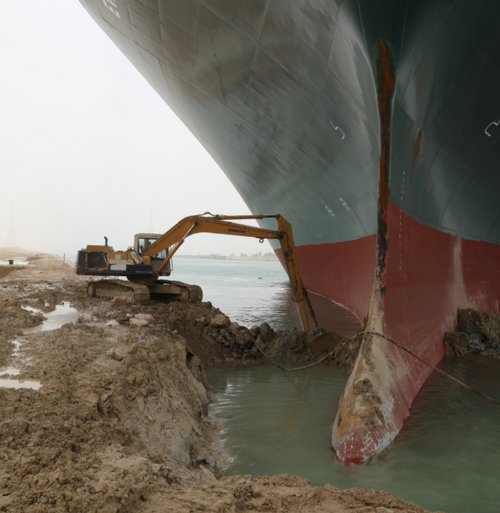 Peter Berdowski, CEO of Dutch company Boskalis who has been tasked with dislodging the vessel, warned Ever Given “could be stuck in the canal for weeks.” 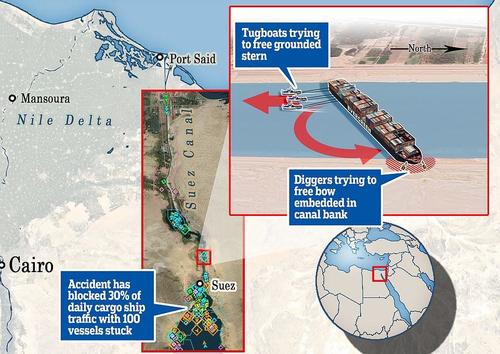 So actual timelines on when the vessel will be unstuck are unclear. The blockage is wreaking havoc across global supply chains, and crude prices were higher on Friday morning on mounting fears the containership will be stuck for much longer than initially anticipated. Since the containership got stuck on Tuesday, crude prices have been chopping around 57-handle to 61-handle. 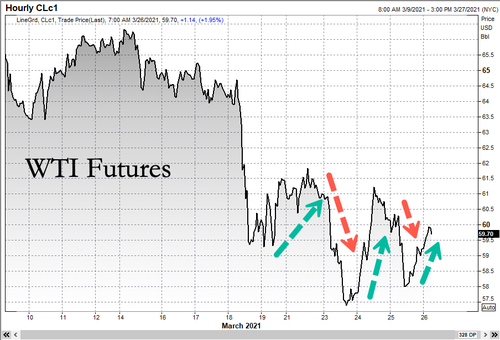 On Friday, tugboats and suction dredger crews worked around the vessel’s front hull to remove sediment. The task to refloat the 200,000-ton ship may involve removing containers to lessen the vessel’s weight.

Since Tuesday, tugs and diggers have been unsuccessful in attempting to refloat the stranded vessel. As hundreds of ships pile up on either end of the canal entrances – A.P. Moller-Maersk A/S and Hapag-Lloyd AG have instructed their vessels to take alternative routes to avoid the canal. Vessels have been instructed to reroute around the Cape of Good Hope. 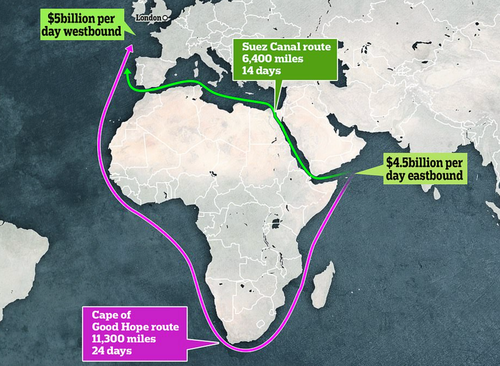 The canal is one of the world’s most important shipping lanes, with 12% of global trade and 8% of liquefied natgas traverse the canal and nearly two million oil barrels each day. Every day the canal is blocked, it halts about $9.6 billion of trade.

“The number of ships loaded with billions of dollars worth of goods waiting to traverse the canal has risen to more than 300,” according to Bloomberg data.

Reeling from the blockage, marine freight rates are surging this week as companies race to find alternative shipping lanes.

According to Bloomberg, the cost to ship a 40-ft. container from China to Europe has risen to $8,000, up 4x year-over-year. Suezmax vessels, which carry about 1 million barrels of crude, are now chartering for approximately $17,000 per day, the most since summer 2020. 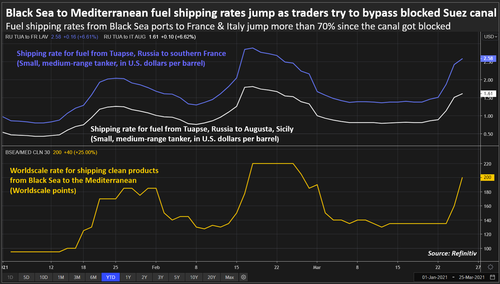 On top of an already stretched global supply chain, manufacturers in Asia are already preparing for extended shipping delays due to the blockage. To get an idea of some of the goods that flow through the canal from the East to West, cargo aboard an HMM Co. vessel moored outside the canal is carrying frozen beef, paper, beer, auto components, chocolate, furniture, frozen pork, and other goods.

Other reports include Caterpillar Inc. is facing shipping delays because of the canal blockage and is considering air freight for certain parts.

Mark Ma, owner of Seabay International Freight Forwarding Ltd., a company that handles Chinese goods including toys, pillows and mattresses sold on Amazon, has 20 to 30 containers stuck in the canal.

“If it can’t be resumed in a week, it will be horrible,” said Ma. “We will see freight fares spike again. The products are delayed, containers can’t return to China and we can’t deliver more goods.”

More reports indicate at least 10 LNG vessels from the Middle East with end destinations in Europe have been delayed.

“Even if the route is liberated within one week, there is a large queue of cargoes lining up to cross the canal,” said Carlos Torres Diaz, Rystad’s head of gas and power markets. “The return to normal flow will take some time.”

The knock on effects of the blockage is rippling through the global supply chain and is the “worst-case scenario” for global trade.

Can Europe Survive Next Winter Without Russian Gas?