A super-fast rise in commodity prices is underway. It should not be a surprise that as the world economy re-opens, commodity prices start to rise to reflect more robust demand conditions. But what has been surprising is the speed and breadth of the increase.

The current commodity cycle shows an economic cycle’s characteristics underway for a few years, not just getting started. That creates the potential for a quicker cost-push price cycle for products that coincides with an uptick in service prices, resulting in a lift in general inflation sooner and by more than what is currently expected by the markets and policymakers.

The Institute of Supply Management (ISM) reported that its composite index of prices for the manufacturing sector increased four percentage points to 86%. That represents the highest reading since July 2008. Although numerically the same, the economic and commodity price environments between 2008 and 2021 are fundamentally different. 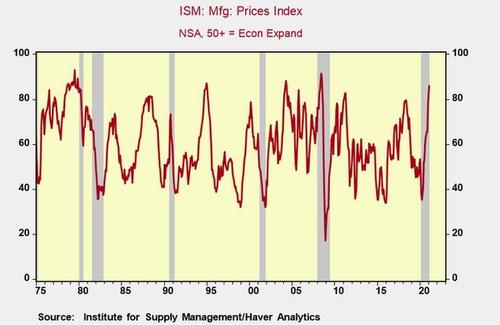 February 2021 represents the early months of an economic recovery, while in 2008, the economic cycle which had been running for several years had already turned down. Also, high oil prices dominated the commodity cycle of 2008. Oil in July 2008 averaged $133, a record high and nearly double year-ago levels. In 2021, ISM”s February report listed 50 commodities rising in price, and the cost of oil was $59 a barrel, up from $50 one year earlier.

Broad-based commodity cycles have more significant momentum and staying power, unlike those driven by a single item, such as the case of 2008.

The sharp and broad-based rise in commodity prices is evident in the Bureau of Labor Statistics (BLS) producer price report. Prices for crude goods, excluding food and energy, have risen 25% in the past year. 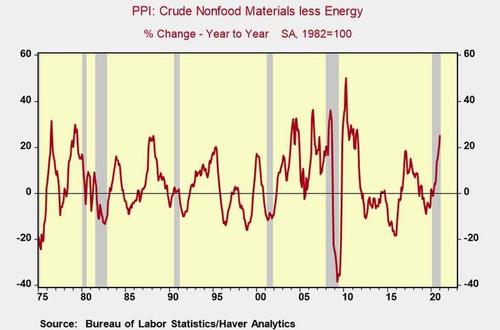 Other than the sharp bounce in 2010, following the record plunge in 2009, the recent 12-month increase in core crude prices represents the most abrupt and substantial increase for the start of an economic recovery in 50 years.

Consumer products represent a little more than a third of the basket of goods and services that make up the consumer price index. But products (or goods) are the cyclical component, and any uptick in prices would coincide with upward pressure on service prices. 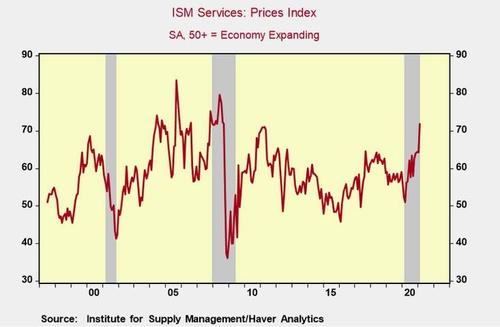 The price information coming from surveys of manufacturers and service firms paint a broader uptick in general inflation, much more than what expressed in Federal Reserve officials’ future price expectations. Based on current trends, consumer price inflation could easily top 3% in 2021. And while policymakers may characterize the inflation uptick as transitory, broad inflation cycles are not transitory and require monetary tightening to reverse.

The GameStop Rebels Vs. “Too Big To Fail”

Citi Warns Of ETF Distortions Due To Gamestop Surge