It’s starting to look like the new ultra-high net worth individuals are formerly twenty-somethings that got their start trading on Robinhood. Some of those who have smashed and grabbed on the platform are now turning to professionals to help protect their winnings. At least that was the takeaway from a Bloomberg report featuring several Robinhood traders who have done well and are now seeking out professional financial advisors to manage their wealth.

The piece featured traders like 31 year old Jeremy Johnson, who, after investing $15,000 per year with Robinhood, has decided to move on to greener pastures. “You can save your money all you want, but if it’s not doing anything, what does it look like long term?” he asked Bloomberg.

Rather than be a bad omen for financial advisors, the pandemic has actually helped the field grow. For Johnson, a financial advisor meant help saving more money, life insurance recommendations and a mix of different types of investments.

And he’s not alone: 40% of U.S. based investors said they need more financial advice. 56% of those people said they would be willing to pay for such advice, up 5% from 2019. 82% that pay for the financial advice say it’s worth the price. Investors who have an advisor are twice as likely to say they have the best investment strategy compared to those who go it alone, BBG notes. 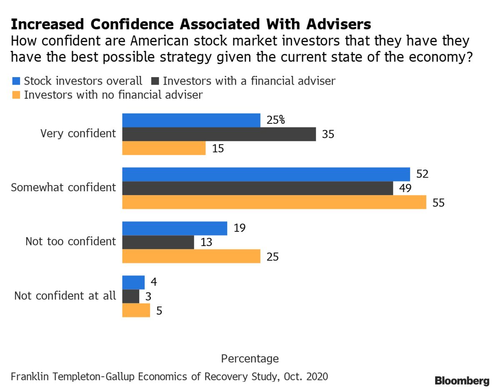 Investment advisor Aspiriant LLC said it saw a push in demand after stocks plunged back in March of 2020. Additional clients turned up during the year as high profile IPOs hit the market, the firm said. Its client list was up 32% in 2020.

30 year old pharmacist Tia Ware, who was once taken back by the $1200 fee of hiring a financial advisor, has come around to the idea. She said: “At first I was like ‘hell no. But now, yes, when I see my accounts. If I didn’t have a financial adviser, I’d only have shoes and bags to show for it.”

After the pandemic started, she said she engaged with her advisor far more often than in years past.

Brokerages like Schwab say they have created a new pipeline to financial advisors by taking on new accounts as a result of zero trading fees. Schwab’s digital advisory assets grew 18% in 2020 to $57.9 billion.

People are “more warm and receptive to paying for and receiving advice” during turmoil, financial advisor Eddie Welch concluded.

Even The Banks Are Bailing Now: Dealers Dump Record Amount Of Treasurys