Following yesterday’s impressive 10Y auction, which only tailed as a result of traders realizing just how massive the short overhang in 10Ys remains (first pointed out here) which sparked a furious rally in the 10Y two hours ahead of the auction’s 1pm deadline, the situation in the repo market has stabilized somewhat, but still remains clearly troubled, with Bloomberg writing that the cost to borrow 10-year Treasuries in the repo market has retreated from extremes hit on Thursday after the 10Y auction, though the security still remains special ahead of the March 15 settlement.

According to ICAP, the daily repo rate for 10-year Treasuries was around -1.60%/-1.85%, while Break Capital quoted it at -1.75%/-2% earlier, confirming something we have noted for the past week: funding markets continue to respond to the heavy supply of cash in the front end.

The big question for traders is what this means for today’s 30Y bond auction at 1pm, and whether the $24BN reopening will be met with the same enthusiasm as yesterday’s benchmark sale, especially when considering the massive bond sale from Verizon which is tapping a whopping seven-part offering to help pay for its 5G spectrum commitment. The sale encompasses maturities from three years to 40 years, and the combined size – perhaps up to $25 billion, if not slightly more – is substantial. According to Bloomberg, “it’s potentially one of the five largest corporate deals ever.”

And while we anticipate that today’s 30Y auction will sneak through without much effort, overnight JPMorgan rates strategist Jay Barry issued a rather ominous warning, and in a note titled “How are outsized changes in issuance impacting auction dynamics?” (available to pro subs in the usual place) he points out that Treasury supply has gotten increasingly more difficult to absorb (and that’s even with the Fed monetizing $80BN in Treasurys every month).

Barry writes that with nominal coupon auction sizes 50-95% larger than they were a year ago, he sees evidence that “supply has become somewhat harder to absorb, especially over the last month, and yields have become dislocated from fundamental drivers”

The JPM strategist then notes that end-user demand has “moderated somewhat” in 2021, particularly in the intermediate sector… 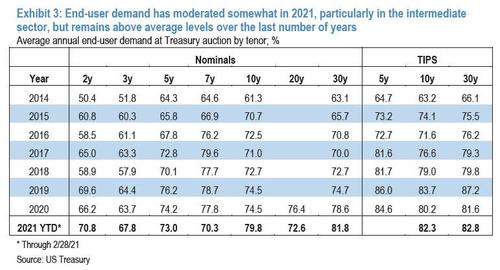 … but remains above average levels observed over the last number of years. He points out that the bulk of end-user demand comes from investment managers. Chart 4 shows they have been responsible for 50-60% of total demand at auction in recent years. Along the curve, the demand tends to be somewhat larger at the long end than the front end.  Meanwhile, foreign demand has fallen from its highest share in the middle of the last decade, but has rebounded more recently at the front end of the curve (Exhibit 5). The exhibit shows that at the long end of the curve, foreign investors tend to represent a smaller share of demand than at the short end or in intermediate

At the same time, despite fairly robust end-user participation, the amount of duration dealers are absorbing at auction each month has doubled over the past year, while risk-taking capacity remains constrained.

Just as troubling, and perhaps the clearest indication of declining buyside demand in the primary market, auction tails have become somewhat more prevalent YTD, particularly in 5- and 7-year notes and 20-year bonds. 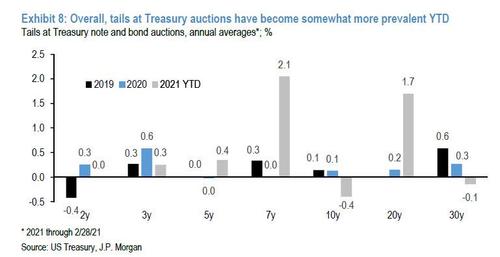 As a result, he notes the belly is the “most vulnerable sector,” and any further increase in yields should be led by 5- to 10-year notes rather than the long end. Extending on this, Barry notes that over the past six months, the largest bear-steepening move occurs two weeks before the mid-month bond auction, with a “more moderate” belly-led rise in yields toward the end of the month; these trades have been consistently profitable and may continue to be.

Meanwhile, the JPM analyst also notes that while dealer share of demand at auctions hasn’t appreciably declined in the past year, the amount of duration they’re absorbing each month has doubled. “Thus with dealers absorbing more than double the duration per month than it did a year ago via the auction, but not warehousing more risk, this is perhaps driving the more variable auction results we’ve seen in recent months.”

Despite some wobbly dealer demand, the market continues to benefit from robust end-users, whose share of auction demand in 2020 was 10 to 20% higher than average levels in 2014; their participation has moderated somewhat in 2021 in the 7- to 20-year sector, “which experienced the most aggressive increase in auction sizes over the past year.”

Turning to intraday patterns in yields around Treasury auctions, Exhibit 12 shows the cumulative change in yields in intermediate and long-end yields from 10:30am, following most of the morning data releases, though 3:00pm, a full 2 hours after the auction. 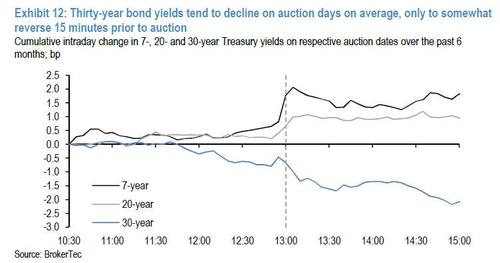 Notably, 30-year bond yields have tended to decline modestly in the late morning, only to see a modest concession build in the 15 minutes prior to the auction, after which they continue to decline again. This is not entirely surprising given the large concession observed in the days leading up to the bond auction. 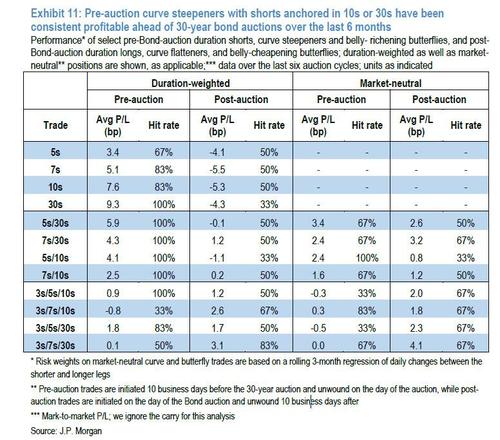 And speaking of the looming 30Y auction, Barry’s conclusion is especially apropos: “there is strong evidence of cyclicality in the Treasury market microstructure around the auction window: depth is generally robust over the late morning and early afternoon trending higher post-open, it drops by a substantial magnitude around the auction, and then recovers to around 80-90% of pre-auction levels for the remainder of the afternoon session.”

Let’s hope that depth will be enough to absorb today’s $24BN in supply or else the market fiasco unleashed with the catastrophic 7Y auction two weeks ago is set to repeat.

Blain: Failing Global Politics And Inflation Will Be A Nasty Shock