SUV-Sized Battery Was Just Jettisoned From The ISS

With space junk becoming a significant problem that could wreak havoc on working satellites, the International Space Station (ISS) decided to dump an SUV-sized pallet of batteries into low Earth orbit.

The ISS discharged a 2.9-ton pallet of used batteries last Thursday, the most massive object it has ever ejected, NASA spokesperson Leah Cheshier told Gizmodo. 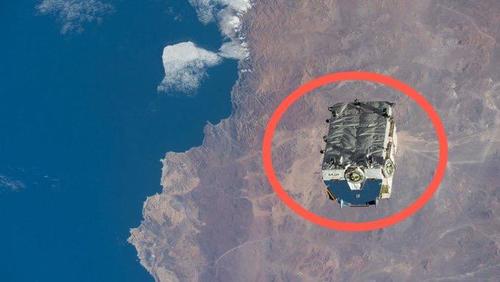 “The External Pallet was the largest object—mass-wise—ever jettisoned from the International Space Station at 2.9 tons, more than twice the mass of the Early Ammonia Servicing System tank jettisoned by spacewalker Clay Anderson during the STS-118 mission in 2007,” Cheshier said.

The pallet is made of nickel-hydrogen batteries and will orbit the Earth for the next two to four years “before burning up harmlessly in the atmosphere,” according to NASA.

Today’s ROBO team (@ROBO_Seagram @ROBO_Birchnall in @csa_asc & @LeVayNathan in @NASA_Johnson) released the HTV-9 Exposed Pallet with old @Space_Station batteries using #Canadarm2 & magic of orbital mechanics! EP been on ISS for a while. Will burn up in atmosphere in 2-4 yrs! pic.twitter.com/9QhB6jJhVs

She said the object is “no threat” to working satellites and will be closely monitored by U.S. Space Command.

However, Phil Plait, whose “Bad Astronomy” blog runs on Syfy Wire, tweeted: “This strikes me (haha, a pun given the circumstances) as dangerous. It seems big and dense so unlikely to burn up completely.”

The ejection of the 2.9-ton object comes as the European Space Agency (ESA) recently warned that millions of objects are orbiting Earth, and there’s bound to be a collision between space junk and working satellites.

If readers are curious about just how much space junk is orbiting above, ESA’s animation shows an incredible view of all the debris:

The volume of both function and non-function objects in orbit has been steadily increasing since the start of the space age in 1957. Now there’s so much junk orbiting around the planet that collision risks are rising.

How The Fight Over American Freedom Will Probably Escalate