What Happened:  A letter to the editor published in the New England Journal of Medicine titled “Open Schools, Covid-19, and Child and Teacher Morbidity in Sweden” has found that “Despite Sweden’s having kept schools and preschools open, we found a low incidence of severe Covid-19 among schoolchildren and children of preschool age during the SARS-CoV-2 pandemic…No child with Covid-19 died…Among the 1,951,905 million children who were 1 to 16 years of age, 15 children had Covid-19, MIS-C, or both conditions and were admitted to an ICU, which is equal to 1 child in 130,000.”

Sweden was one of the few countries that decided to keep schools open. The study points out that the number of deaths from any cause among the 1,951,905 children in Sweden (as of December 31, 2019) who were 1 to 16 years of age was 65 during the pre-Covid-19 period of November 2019 through February of 2020 was 65, and 69 during 4 months of exposure to Covid-19 between March and June of 2020. The data shows that there was no significant difference here.

In a Karolinska Institute press release, lead author and pediatrician Jonas Ludvigsson, MD, PhD, indicated he was hopeful about the results. “It is very gratifying that serious COVID-19, defined here as needing treatment in an intensive care unit, is so rare among children despite schools being open during the pandemic,” he said.

“The next step will be to follow up the children who were treated in an intensive care unit for COVID-19 to see if they have recovered fully. My gut feeling is that children who have been seriously ill because of MIS-C seem to recover fully eventually.”

The point is, children are not being admitted to the ICU in Sweden for C0vid-19, and children are not dying from Covid-19. Severe Covid-19 among children seems to be rare, and also has a 100 percent recovery rate. Given the fact that many infections are also asymptomatic, it really has no impact on their life. So, while we continue to hear that cases are soaring, it’s important to ask if this is really a big deal? And why is it that other viruses prior to this one that infect hundreds of millions and kill tens of millions a year were not subjected to the same scrutiny? Is it because authorities are worried that children will be a vector of transmission? Do asymptomatic people spread Covid?

This data also echoes what many doctors and scientists have been expressing regarding the severity of the virus, not just for children but for everybody. For example, Dr. Jay Bhattacharya, MD, PhD, from the Stanford University School of Medicine in California recently appeared on a JAMA (The Journal of the American Medical Association) Network conversation alongside Mark Lipsitch, DPhil and Dr. Howard Bauchner, who interviews leading researchers and thinkers in health care about their JAMA articles.

During the conversation, Dr. Bhattacharya said that the survival rate from COVID-19, based on approximately 50 studies that’ve been published providing seroprevalence data, for people over 70 years of age is 95 percent. For people under the age of 70, the survival rate of COVID-19 is 99.95 percent. He went on to state that the flu is more dangerous than COVID-19 for children, and that we’ve (America) had more flu deaths in children this year than Covid deaths.

Bhattacharya is one of the initiators of The Great Barrington Declaration. The declaration has an impressive list of renowned scientists who have come on board as co-signers, and has now been signed by more than 50,000 doctors and scientists. It’s an initiative that strongly opposes lockdown measures.

Why This Is Important: This information is important because lockdown measures, according to many, aren’t really doing anything to stop the spread of the virus and may be delaying “herd immunity.” Furthermore we are taking all of these measures based on case counts, and a virus that has an extremely low mortality rate. Respiratory viruses prior to Covid already infected hundreds of millions and killed tens of millions a year. What’s even more concerning is the fact that medical professionals and scientists who share information that opposes the measures being taken by multiple governments are being subjected to extreme amounts of censorship. Scientific discussion is being shut down and we are seeing one opinion and side receive all of the attention.

Over the last few months, I have seen academic articles and op-eds by professors retracted or labeled “fake news” by social media platforms. Often, no explanation is provided. I am concerned about this heavy-handedness and, at times, outright censorship. – Vinay Prasad, MD, MPH (source)

Below is a tweet from Martin Kulldorff, a Harvard Professor of Medicine. I agree wit him. 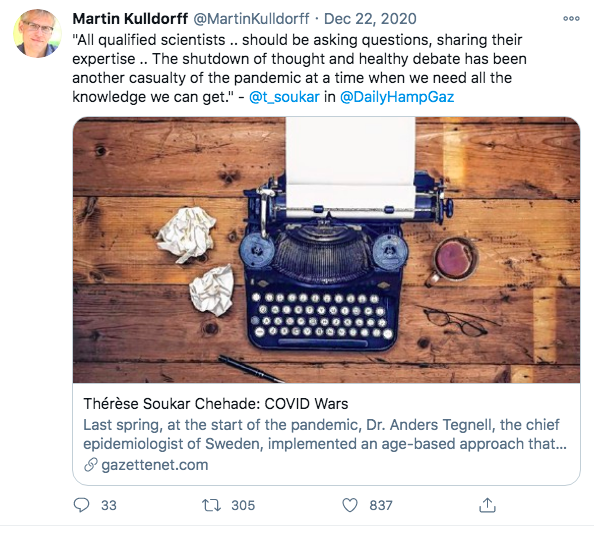 Lockdowns are are also based on “cases” as PCR testing. That’s an entirely separate issue that many scientists and doctors are also raising concerns about. If one is asymptomatic and tests positive, or even slightly symptomatic and tests positive, this does not mean one has Covid. You can read more about that in an article I published last month titled “22 Scientists Publish Paper Claiming The PCR Test Is “Useless” For Detecting COVID-19 Cases,” the article goes into much more detail.

I also recently published an article titled “Ontario (Canada) Admits Labelling Deaths As COVID When They’re Not As A Result of COVID.” Deaths being attributed to Covid but not as a result of Covid have also raised many concerns. There are more details and examples provided within that specific article.

As far as lockdowns go,

The media have paid scant attention to the enormous medical and psychological harms from the lockdowns in use to slow the pandemic. Despite the enormous collateral damage lockdowns have caused, England, France, Germany, Spain and other European countries are all intensifying their lockdowns once again….Internationally, the lockdowns have placed 130 million people on the brink of starvation, 80 million children at risk for diphtheria, measles and polio, and 1.8 million patients at risk of death from tuberculosis. The lockdowns in developed countries have devastated the poor in poor countries. The World Economic Forum estimates that the lockdowns will cause an additional 150 million people to fall into extreme poverty, 125 times as many people as have died from COVID. – Dr. Bhattacharya

Criticism of lockdowns has been a common theme. Early on during the first wave of the pandemic, a report published in the British Medical Journal (BMJ)  titled Covid-19: “Staggering number” of extra deaths in community is not explained by covid-19″  has suggested that quarantine measures in the United Kingdom as a result of the new coronavirus may have already killed more UK seniors than the coronavirus has during the months of April and May .

Taken together, the data are clear both that national lockdowns are not a necessary condition for Covid-19 infections to decrease and that the Prime Minister was incorrect to suggest to MPs that infections were increasing rapidly in England prior to lockdown and that without national measures, the NHS would be overwhelmed…Lockdowns have never previously been used in response to a pandemic. They have significant and serious consequences for health (including mental health), livelihoods and the economy. Around 21,000 excess deaths during the first UK lockdown were not Covid-19 deaths. These are people who would have lived had there not been a lockdown.

According to a recent study published in Pediatrics, lockdown and social distancing measures are strongly correlated with an increase in suicidal thoughts, attempts and behaviour.

According to Dr. John Lee, a former Professor of Pathology and NHS consultant pathologist,

Lockdowns cannot eradicate the disease or protect the public…They lead to only economic meltdown, social despair and direct harms to health from other causes…Scientifically, medically and morally lockdowns have no justification in dealing with Covid.

Scrolling through the twitter feed of The Great Barrington Declaration, I came across a post from the American Institute For Economic Research (AIER) titled “Lockdowns Do Not Control The Coronavirus: The Evidence.”  Be sure to check that out if interested.

The risks, harms and consequences of lockdowns are well known, and above are simply a few of many examples. Is all of this really about the virus? Or is this, among many other events, simply being used to justify measures such as “The Great Reset?“

The Takeaway: At the end of the day, when we examine information we really need to keep our emotions in check. These days people are getting upset and mad at each other as we continue to see so many people polarized in their beliefs. What’s more important is to respect each other and everybody’s viewpoints, even if they disagree with your own. A good exercise, I find, is to take on the viewpoint of another who disagrees with you and try to understand why they feel the way they do.

Why do we fail to have conversations about controversial, or what are made out to be controversial viewpoints? Why can’t we get along with each other? Why can’t we have proper discussions about these controversial topics in the open and why does mainstream media always seem to be-little and call everything a “conspiracy theory” if it goes against the grain, no matter how much evidence there is behind it?

Do we really want to live in a world where we give such a small group of people and governments the authority to drastically change our lives, at will, even if these decisions do not represent the will of a large chunk of people? Is it time to re-examine the way we live here, why we live the way we do, and why we simply listen to those who appear to not have our best interests at heart?

Should people not be free to live how they live? Especially when things are not so black and white as they are made out to be? Something to think about.

Reprinted with permission from Collective Evolution.

The post Sweden Has Had Schools Open, More Than One Million Kids, & No Deaths appeared first on LewRockwell.