The Mayor of Tampa has threatened Super Bowl fans who were seen outside at bars not wearing face masks with police investigations. 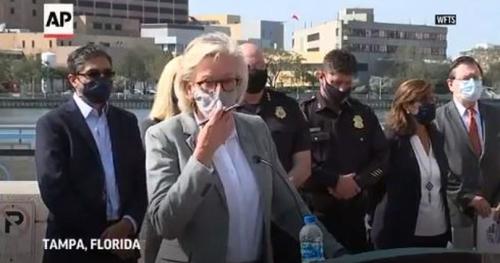 During a press conference, Mayor Jane Castor (D) said those who flouted the rules will be “identified” by law enforcement.

“We had tens of thousands of people all over the city; downtown, out by the stadium, Ybor City, down here in Channelside, and very, very few incidents. I’m proud of our community, but those few bad actors will be identified, and the Tampa Police department will handle it… There just has to be that level of personal responsibility. You can supply everyone with a mask, advise them of the science behind it, and expect that they are going to abide by the mask order,” said Castor.

BREAKING: At a press conference Monday, Tampa Mayor Jane Castor said that maskless fans at the Super Bowl will be “identified” by law enforcement and that police will “handle” the situation pic.twitter.com/S20Xv97jYJ

Castor had issued a temporary 2 week order mandating mask wearing in certain outside areas, with fines of $500 for those caught disobeying the mandate. This clashed with a previous executive order issued by Florida Governor Ron DeSantis which prohibited local and city governments from issuing fines to anybody who refused to comply with a mask mandate.

“We really don’t want to get into being the mask police,” said Dugan.

The issue of people not wearing masks outside at bars received attention after a CNN reporter complained about people “hanging out at tables” before calling the police in a panic for advice on what to do.

US Closing Last 2 Consulates In Russia, Only Moscow Embassy Remains