On Wednesday, two Senate committees delayed Wednesday votes on President Biden’s pick to lead the Office of Management and Budget (OMB), Neera Tanden, after Democratic Sen. Joe Manchin (D-WV) and several GOP senators announced they wouldn’t vote for her – in what the Washington Post described as “probably dooming her selection in an evenly divided Senate.”

Tanden, president of the John Podesta-founded Center for American Progress, has come under fire for a series of now-deleted tweets promoting the Russia hoax as fact, denigrating political foes, and other statements which Manchin deemed ‘overly partisan.’ 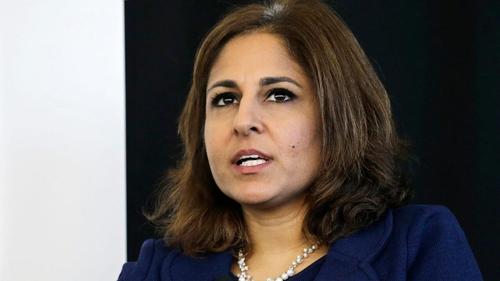 That’s not all, Tanden reportedly punched a progressive journalist in 2008 who had the audacity to ask then-Sen. Hillary Clinton about voting in favor of the Iraq war.

“Ms. Tanden responded by circling back to Mr. Shakir after the interview and, according to a person in the room, punching him in the chest,” the New York Times reported in 2019, describing the alleged incident from when Tanden served as a top Clinton adviser.

Tanden claims she ‘pushed him.’

On Wednesday, Sen Lisa Murkowski (R-AK) expressed concerns over Tanden, saying ” suggested to the White House that my colleagues were being very critical of the statements, and rightly so and I think some of (the tweets) were clearly over the top,” adding “Apparently I’m going to have to do more looking into what she thinks about me,” after a tweet recently resurfaced in which Tanden attacked Murkowski.

What’s more, a progressive advocacy group, RootsAction, says they’re “heartened” that Tanden’s nomination has stalled and ‘may soon be withdrawn.’

“We are heartened that Tanden’s nomination has stalled. Mainly due to her well-documented coziness with corporate elites, she is the wrong choice to head a federal agency that is vital in the regulatory process. It strains credulity to contend that she would be a true advocate for the public interest after many years of dutifully serving corporate interests,” the group said in a statement.

“RootsAction opposed her OMB nomination from the outset. With our encouragement, many thousands of constituents wrote to their senators and urged them to vote against confirmation — not because of her ‘mean tweets’ but because of her close funding relationships with corporate titans and foreign governments. What’s stunning is the silence from Senate Democrats about the potential conflicts-of-interest raised by her decade of aggressive fundraising from powerful interests,” according to co-founder Jeff Cohen.

Meanwhile, RootsAction national director Norman Solomon said “Business-as-usual in Washington means that elite donations are inundating think tanks and members of Congress. Tanden epitomizes a pay-to-play view of governance, which helps to explain why the anti-regulation, anti-union U.S. Chamber of Commerce is supporting her nomination. We need an OMB director without corporate ties that bind. Neera Tanden just doesn’t qualify.”

These Countries Have Yet To Start COVID-19 Vaccinations

CLOs Join The Everything Bubble