On Monday, when looking at the Treasury’s latest “sources and uses” table… 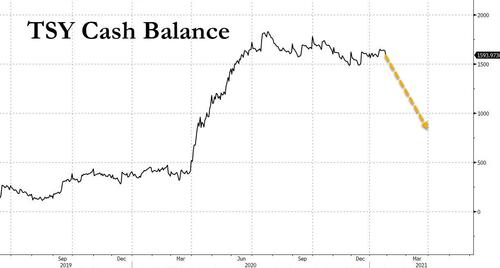 … we said that such a drop would have marketwide implications, as – first – banks will see their reserve levels soar by roughly $900 billion this quarter, a move that will lead to significant risk asset upside if previous instances of reserves growth are any indication. Of course, besides risk assets, such a move would also profound implications on the bond market.

This morning, the Treasury Borrowing Advisory Committee (TBAC) picked up on this development and in its latest quarterly report to Janet Yellen, the TBAC said the cash balance may need to reach “significantly lower levels” by the end of the debt ceiling suspension period on July 31 – well below the $500BN expected in the latest Treasury projection – and as the TBAC warns, such a decline which could be “very disruptive” to the Treasury market, to wit:

The Committee noted the elevated cash balance that Treasury has maintained in recent months and the updated assumption that it would drop to $500 billion over the period through June. The higher balance has been held to account for the potential need for funds amid considerable uncertainty about the path of fiscal policy and the timing of the associated projected payments. Treasury’s approach has been precautionary given its desire to be able to disburse funds quickly to support the economy without necessitating abrupt shifts in issuance. The assumed decline in the cash balance would be consistent with an outcome in which Treasury used those balances to meet some of its need for funds over that period.

The debt limit suspension period is slated to end on July 31st. Based on past precedent, it is possible that the cash balance may need to reach significantly lower levels by that date. TBAC members agreed that this outcome could be very disruptive to the Treasury market.

And since it is only in the context of the continued debt ceiling suspension that the Treasury cash balance would need to keep sliding (to match the cash level that was present when the last debt ceiling extension was passed), the “TBAC strongly urges Congress to suspend or raise the debt limit in a timely manner to avoid such disruptions.”

Separately, the TBAC members also encouraged the Treasury to announce a SOFR floating-rate note, ideally in FY2021, something which it failed to do today as noted earlier. The Committee expects that issuance by the Treasury would “help further establish market standards for notes, encourage technological investment, support development of a term rate, and increase liquidity of SOFR-indexed products”, which considering the looming deadline for converting from LIBOR to SOFR is long overdue.

Finally, quickly going through the latest, Feb 2, TBAC Mtinutes, we find the following (courtesy of BBG):

The full TBAC presentation is below (pdf link):

Will The Economy Replace Ten Million Jobs By 2022?