The passing, by The Senate, of the Biden admin’s $1.9 trillion package of pork and payoffs has apparently triggered Senator Ted Cruz. Having attempted to insert an amendment that would disallow the $1400 handouts to illegal immigrants (paid for by legal US taxpaying residents), he was attacked as a “liar” by Senator Dick Durbin

Cruz had asked, “The question for the American people to answer is, should your money, should taxpayer money, be sent, $1,400, to every illegal alien in America?”

Durbin said, “Undocumented immigrants do not have social security numbers. And they do not qualify for stimulus relief checks, period. And just in case you didn’t notice, they didn’t qualify in December… To stand up there and say the opposite is just to rile people up.” 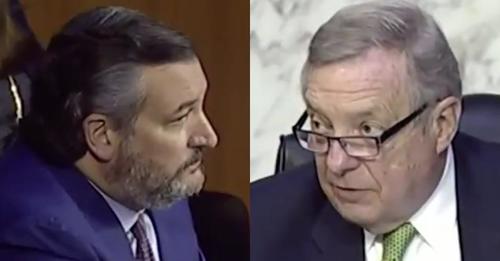 Cruz begins by asking (rhetorically): “Want to understand why we’re so divided? Why each side seems to live in alternate universes?”

Take a moment & examine the misinformation here (both deliberate & inadvertent)…

FACT 2: Dems voted against my amendment to prohibit sending those $$ to criminals (murderers, rapists, child molesters) currently IN PRISON. EVERY Dem voted to send criminals the $$.

FACT 3: I then called up my amendment to prohibit illegal aliens from getting the $1400 checks.

FACT 4: Durbin then screamed “liar!” and insisted no illegal immigrants would get $$ because the bill requires social security numbers.

FACT 5: Lefty “press” outlets, like Daily Beast, dutifully repeated Durbin’s charge. They did ZERO fact checking of their own, just said that my claim that illegal immigrants would get the $$ was “false.”

FACT 6: Lefty pundits & celebrities like Morgan Fairchild happily repeat the charge that I “lied.” They know none of the facts, but in this politically charged world, the other side must always be wrong.

FACT 7: As it so happens, it was Durbin who was lying, and he knew it. Why?

FACT 8: There are 12mm or more illegal immigrants. 60% of them are from visa overstays. Many (if not most) of them have social security numbers.

FACT 9: When Durbin said “illegal immigrants don’t have social security numbers,” he was deliberately saying something false, knowing it would be repeated.

FACT 10: Under the bill’s language, MILLIONS OF ILLEGAL IMMIGRANTS will get the $1400 checks.

FACT 11: My amendment required that recipients would be “lawfully present,” i.e., legal.

FACT 12: When Durbin falsely said ZERO illegal immigrants would get $$, I asked if he would yield for a question. Schumer, sitting next to him, bellowed “no!!”

FACT 13: If Durbin had taken my Q, I would have asked, “if you’re right that no illegal aliens will get $$ under this bill…WHY ARE YOU AND EVERY DEM OPPOSING MY AMENDMENT TO DO JUST THAT?”

The answer is that Durbin was lying, and he knew that Lefty partisans would reflexively believe his gals charge that I was the one lying.

FACT 14: When the checks go out, millions of illegal immigrants WILL GET $1400 checks.

Cruz ended by rather ominously – but accurately – pointing out that:

Everyone is a partisan warrior.

And we only believe news from our own side.”

For America to come together, this must change.

Home Depot Ceiling Fans Recalled After Blades Detach, Injuring People, While In Use