The government-sponsored crackdown on China’s tech behemoths roared back into gear on Friday as Simon Hu, the head of Alibaba’s Ant Group (the payments group that saw its spinoff IPO unceremoniously canceled by President Xi and the CCP last year), abruptly resigned, while Tencent – another member of the Chinese tech giant pantheon – has reportedly been put on notice.

Hu – who was brought on by Alibaba in late 2019 to run Ant Group during an executive reshuffle – was supposed to lead the financial group to post-spinoff success, with ambitions of breaking into the western market, and eventually competing against American tech and financial giants in their own backyard. Fortunately for Ant Group’s American competitors, the CCP has decided that it would rather keep restive tech giants firmly under its thumb rather than risk allowing them to accumulate even more economic power.

Earlier, Pony Ma’s Tencent was officially censured by China’s antitrust watchdog (which has played a high profile role in the big tech crackdown), which imposed a token fine. According to Bloomberg, Tencent will likely now be required to establish a financial holding company to hive off its banking, insurance and payments services businesses.

Such a move would mark a significant escalation in China’s campaign to curb the influence of its technology moguls, days after Premier Li Keqiang pledged at the National People’s Congress to expand oversight of financial technology, stamp out monopolies, and prevent the “unregulated” expansion of capital.

A progression of rules unveiled in the past six months has taken aim at the dominions built by China’s most successful online entrepreneurs. The first blows hit Jack Ma and Alibaba when its subsidiary Ant Group’s $35 billion initial public offering was torpedoed at the last minute, followed by an antitrust probe into Alibaba

Tencent shares have outperformed Alibaba over the past six months, which is roughly how much time has passed since the CCP kicked off the crackdown by canceling the Ant Group IPO – what would have been the biggest domestic offering in China’s history – after Alibaba founder and chairman Jack Ma criticized China’s domestic regulation, accusing it of “stifling innovation.” Tencent shares fell more than 4% in Hong Kong on Friday, as it became clear that new rules drafted by China’s antitrust regulator would be used to harm Tencent as well. The proposed rules to break up market concentration in digital payments and rein in consumer lending online will damage prospects for Tencent’s WeChat Pay and its broader fintech business, which is mainly focused on providing retail banking and consumer lending services to China’s 1.4 billion citizens. 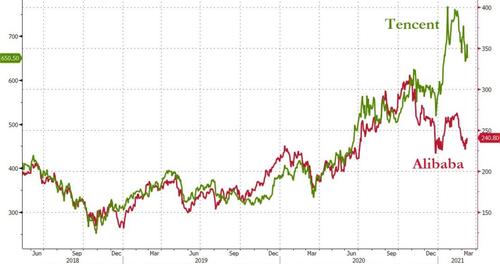 Folding these businesses into a new financial holding company would allow the CCP to regulate Tencent in the same heavy handed way in which it regulates domestic banks (which are mostly owned and controlled by the state). After Ant’s IPO was indefinitely suspended, Beijing forced the Hangzhou-based firm to turn itself into a financial holding company, subjecting it to new capital restrictions, the need for fresh licenses and ownership scrutiny. Bloomberg analysts said that while the new restrictions might not have an immediate impact on Tencent’s bottom line, the impact on its growth prospects is unmistakable.

Fintech is neither Tencent’s fastest-growing nor its most profitable business, minimizing the immediate financial impact, yet the turn of events may signal an era of more rigorous regulatory oversight, with strong echoes of Alibaba’s shifting fortunes.

In a statement, Tencent said it would continue to adapt to regulatory changes.

“We will continue to adapt to changes in the regulatory environment, which we view as beneficial to the industry, and will seek to ensure full compliance,” Tencent said in an emailed statement following the fine by the antitrust watchdog. The company declined to comment on financial regulatory matters.

With Beijing’s domestic stock-market clampdown apparently still in effect, traders looked to corporate credit to see how fears of Beijing’s regulatory smackdown were being interpreted by the market. The stress caused spreads on Tencent’s 2.39% dollar bond due 2030 to widen by about 9 basis points.

China’s CCP has struggled to incorporate support for the country’s tech entrepreneurs, who have become fabulously wealthy thanks to an influx of foreign investment, into the state’s officially communist ideology. Premier Li Keqiang, who is second in power only to President Xi, balanced the CCP’s increasingly heavy-handed stance with assurances that Beijing will continue to support the “innovation and development of platform companies” – so long as they fall in line with the country’s laws.

Picking Up Where Trump Left Off, Biden Threatens Sanctions On Germany For Nord Stream 2

“We Are Hungry” – Violent Protests Erupt As Lebanon ‘Hyperinflation’ Accelerates

BREAKING REPORT: Former FBI Agent on the Ground at US Capitol Says at Least One Bus Load of Antifa Thugs Infiltrated Trump Demonstration