In keeping up with what’s important – and perhaps as a not-so-subtle troll to the world after Bitcoin eclipsed $60,000 this weekend – Tesla released an odd series of 8-Ks Monday morning.

One SEC filing says that, as of Monday, March 15, 2021, “the titles of Elon Musk and Zach Kirkhorn have changed to Technoking of Tesla and Master of Coin, respectively.” The filing, signed by Kirkhorn, says “Elon and Zach will also maintain their respective positions as Chief Executive Officer and Chief Financial Officer.” 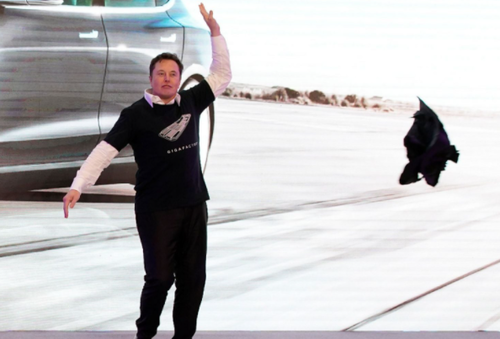 And while it’s great to see a company having fun, as some undoubtedly will say to defend this nonsense, it can really only be described as bizarre behavior for a $700 billion market cap company. All the while, the “fun” comes against a growing backdrop of criticism about Tesla’s Full Self Driving feature – which it has been collecting thousands of dollars per car for, for years.

Effective last week, it was starting to leak out to the press that Tesla is far behind autonomous players like Waymo, despite the narrative the company has been pushing about FSD for years.

1/ The notion that Elon Musk is a full on con artist is starting to migrate from the fever swaps of TSLAQ to mainstream media sources.

AXIOS’ take away comment is that Musk talks out of both sides of his mouth.

Additionally, Musk was receiving some less than stellar press last week for his handling of Covid at Tesla.

“Elon Musk is not a genius. He’s an attention-seeking man-child. And you should pay as much attention to him on issues of public health as you would to a screaming toddler.”

My #minuterant on @MSNBC tonight, on Musk’s ongoing, dangerous nonsense on Covid:pic.twitter.com/YjDuJ971MG

Finally, in another 8-K filed right around the same time as the first, Tesla also announced its Jerome Guillen has moved out of his role as President of Automotive for the company, and is instead now focused on “Tesla Heavy Trucking”.

But hey, ignore that. Here’s the semi going around a track! All hail the Technoking of Tesla!

It has been 1,214 days since Tesla revealed this product and starting taking deposits for it…$TSLAQ https://t.co/k9EOQ3mCT0

Georgia County Official: Raffensperger Sent Armed Secretary of State Agents with Handcuffs to the County After They Complained about the Inaccurate Dominion Machines (VIDEO)

UK Far Ahead Of Europe In Curbing COVID-19