Heading into its Q4 earnings release, it appears that Tesla is almost out of of surprises even though its stock has continued rise precipitously, and just a few days ago it rose just shy of $900. 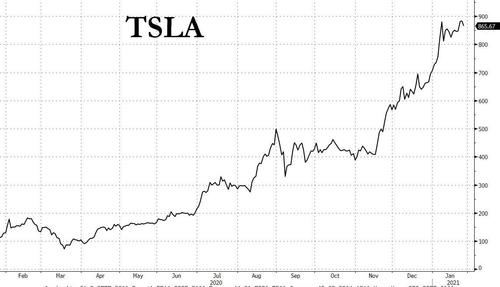 The one thing investors were looking for is to get confirmation that Tesla would report its first full-year profit, a milestone powered by record vehicle deliveries in the face of a global pandemic and a growing appetite for electric cars. As a reminder, the EV maker delivered just under half a million vehicles last year, up more than a third from a year earlier, even as world-wide auto sales plunged roughly 14%, according to researcher LMC Automotive.

In order to get into the S&P, Tesla delivered quarterly profits – in large part funded by selling regulatory credits – during the pandemic despite the temporary shutdown of the company’s lone U.S. car plant because of the health crisis. To manage the impact, Elon Musk battled with local authorities to reopen the factory, temporarily reduced salaries, furloughed workers and sought rent breaks. Later in the year, he tested positive for Covid-19 as the WSJ reminds us.

Wall Street expects Tesla to generate around $1.3 billion in 2020 annual profit when the company on sales of about $31.1 billion. That compares with an $862 million loss in 2019 on sales of $24.6 billion. For the 4th quarter, Wall Street forecasts Tesla will report a record quarterly profit of around $746 million up from $105 million a year earlier. Sales for the October-December quarter are expected to be roughly $10.5 billion, up around 40%.

Tesla has benefited tremendously from growing electric-vehicle demand in China, where the company began delivering locally made vehicles in 2019. The company has expanded production capacity at its Shanghai facility and this month delivered its first made-in-China Model Y sport-utility vehicles. That said, the company faces mounting competition from legacy auto makers such as General Motors and Ford Motor and a fleet of startups that are developing their own plug-in models, including in China.

Also worth noting: Tesla sales of regulatory credits generated nearly $1.2 billion in “profit” in the first three quarters of last year, up from $594 million in all of 2019. This, of course, is not real profits so investors will be watching if this trend continued into year end.

Another thing to watch for: as Bloomberg notes, Robert Baird analyst Ben Kallo raised an interesting idea in his recent note: is there a chance that Elon Musk will combine his companies — Tesla, SpaceX, Neuralink and the Boring Company — into one superstructure/holding company? According to Bloomberg, it’s hard to imagine that happening before SpaceX’s Starlink IPOs, “but you never know.”

A third thing that may prompt questions is how Musk is progressing on his massive stock option award. 4 of the 12 tranches have vested so far, and Tesla has blown past most of the thresholds tied to market value. Remaining are goals on revenue and Ebitda. Tesla said on Oct. 26 that achievement of two of those goals – $35 billion in revenue and $6 billion in Ebitda, collected over four consecutive quarters – was “probable.”

But maybe the most important question is where Tesla fits in to Joe Biden’s EV plan:  The president has directed federal agencies to buy zero-emissions cars. It will be curious if Musk brings it up of their own volition. Or if analysts ask a question about it. Either way, Tesla is an American company that builds EVs in America (and internationally). Are they in with a shout for federal contracts?

So with all that said (phew), here is what Tesla just reported for the just concluded 4th quarter (earnings presentation pdf here):

Gross margin of 21% was also below estimates. A rare miss on the bottom – and margin – line despite a beat on revenue. Sensing that this would be a sore point, Tesla laid out the reason why its operating margin (5.4%) was so much lower than last quarter (9.2%): 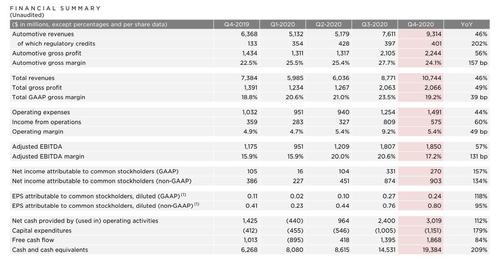 Here are the highlights as published in the Q4 presentation: 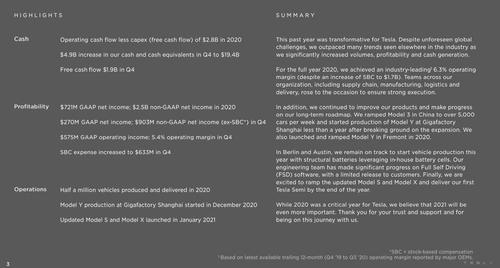 Looking at China, Tesla said that in Shanghai they were able to sustain Model 3 production at or above a rate of 250,000 a year.

Another disappointment: Tesla once again refused to give any guidance on when Full Self Driving will be released, just giving some broad color on what it’s doing: “With each iteration, the system is becoming more robust, resulting in the widening of our user base.”

This was offset by some positive news about progress made in Austin, Texas and Berlin, Germany. The company said that vehicle production is on track to start by year-end at both locations, adding that vehicles from those locations will use in-house battery cells.

In the Outlook section, Tesla says that “given the number of significant projects in the pipeline, we have simplified our approach to guidance for 2021” and doesn’t give a solid number for how many cars it expects to deliver in 2021.

The company also gave the following vague outlook on volumes:

“We are planning to grow our manufacturing capacity as quickly as possible. Over a multi-year horizon, we expect to achieve 50% average annual growth in vehicle deliveries. In some years we may grow faster, which we expect to be the case in 2021.”

Given 2021 delivery guidance was one of the top items that analysts and investors alike were watching out for today, Tesla’s decision to not provide the outlook will weigh on sentiment. Sure enough, between the EPS and margin miss and the lack of guidance, the stock is sharply lower, down as much as 6%, and briefly sliding below $800 in a move that could have a painful hit on the S&P500. 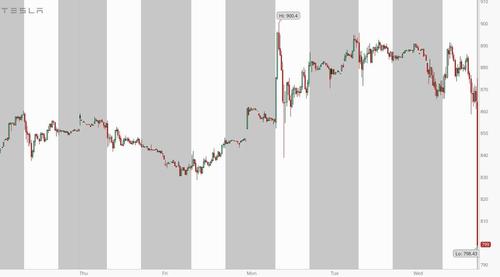 And while we published these below, here agin is a breakdown of total deliveries… 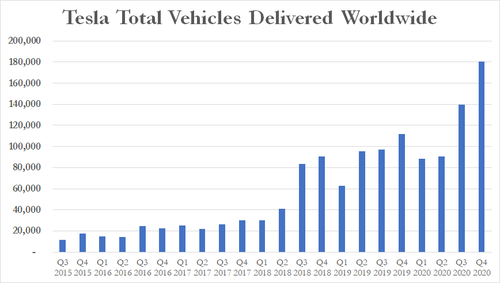 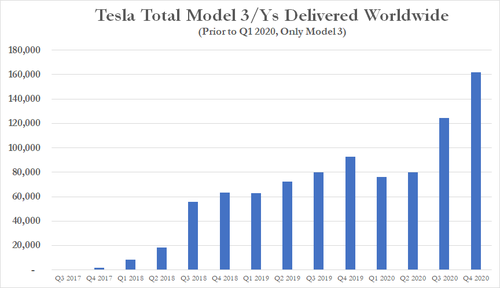 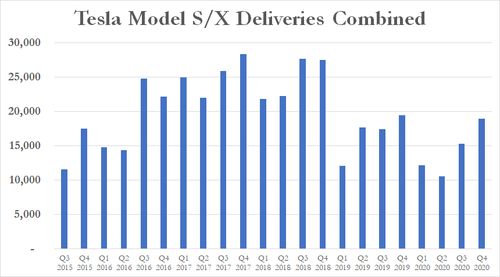