So goes Bitcoin, so goes Tesla.

At least that was the manta on Tuesday morning as Tesla shares plunged in the pre-market session, extending yesterday’s ugly losses and falling below the level where Tesla was included into the S&P 500. In addition to Tesla plunging, Bitcoin was also down about 15% heading into the cash open on Tuesday and a newly announced SPAC deal for Lucid Motors had pulled back more than 40% from highs it made just days ago.

This means that everyone who chased the S&P 500 trade, in addition to anyone who admittedly has been buying over the last 2-3 trading days *cough* Cathie Wood on CNBC last week *cough* is now in the red. 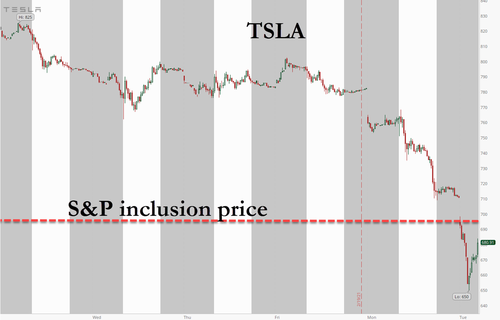 Hilariously, Tesla bull Cathie Wood was actually predicting a market turnaround for the NASDAQ last week. She joined CNBC’s Scott Wapner and warned of the increasing risk of a stock market correction if rates continue to “sharply” rise.

Around the 3:30 minute mark of the CNBC video, Wood told Wapner, “I do believe if rates were to take a sharp turn up, that we would see a valuation reset and our portfolios would be prime candidates for that valuation reset of course.”

Wood went on to say:

“Now one of the things that I found interesting over the last really 20 years is that the S&P’s P/E ratio tends to peak out in the 20 to 25 times range of forward earnings. And I think the reason for that is most portfolio managers and maybe quantitative research researchers are looking at normalized nominal GDP growth in the 4-5% range, which is where long-term interest rates should be normalized. We actually think normalized GDP growth is probably closer to 3%.”

“Now, if you think that’s where long-term interest rates should stabilize, if you think of 20 to 25 times that’s one over four to five percent growth, so it’s the inverse of the growth rate, the nominal GDP growth. And that’s where it seems to be peaking out. We think it’s there, longer term. I agree there will be a valuation reset. There will be fear.” 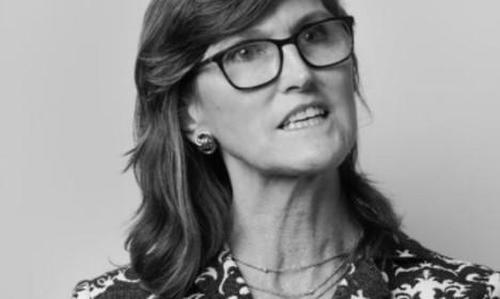 Recall, in the world of Tesla, things don’t seem to be going particularly well. Less than a day ago we noted that Tesla had just stopped selling the base model version of its Model Y without explanation.

And even the pro-Tesla lemmings over at electrek had to admit yesterday that the company’s broader pricing and configurator changes are “becoming hard to follow”. At the moment, the only Model Y available is the $48,990 long range all wheel drive version.

Additionally, last week, Edmunds released a bombshell, claiming that “every single Tesla” they tested didn’t meet its EPA estimated range. This list included the 2020 Model Y Performance, which had a range of 263 miles versus a claimed range of 291 miles.

But we think worth noting even further is a relationship between Tesla and China that looks like it could be under stress. China plays a key role in the automaker’s plans to expand in coming years and Musk’s ability to continually kiss the ass of the CCP in exchange for sweetheart deals and the right to do business in the country will be paramount. For those unfamiliar with that dynamic, we suggest reading our piece from January 2021 called “Elon Musk’s Chinese Fairy Tale Will Eventually Come To An End”.