Texas Attorney General Ken Paxton published a statement Monday that read his office will be probing the cause of natural gas price spikes during the deep freeze that nearly collapsed the state’s power grid, leaving millions of customers without power for days.

“As we learn more about what drove pricing spikes during the recent winter storm disaster, I am expanding the scope of my investigation to include the natural gas industry as well as electricity providers,” Paxton said in a statement, viewed by Environment & Energy’s Edward Klump.

“As we learn more about what drove pricing spikes during the recent winter storm disaster, I am expanding the scope of my investigation to include the natural gas industry as well as electricity providers,” he said in a statement.

Readers may recall in a piece titled “Energy Trader: We’ve Officially Hit “Holy S*it Levels,”” we outlined the cause for the natgas price spike was due to wellheads and other infrastructure freezing.

“…which literally cut off nattie supply amid wellhead freeze-offs, cutting production receipts just when they’re most needed by customers’ demand for heating, we said that since the winter blast is expected to last for the duration of the week, it is likely that nattie prices across the plains states could hit GME batshit levels.”

There were many accounts of natgas prices soaring thousands of percent. In particular, the Oneok OGT natgas spot exploded 32,000% in a few days. 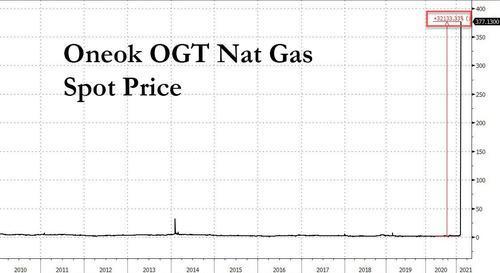 The reason Paxton wants to investigate the source of why natgas prices soared is due to power plants weren’t able to receive any gas and caused a massive spike in power prices. Customers who were on variable cost plans saw their energy bills rocket into the thousands of dollars. It also caused a humanitarian crisis for the state, transforming it into a third-world country overnight.

Dr. Fauci: A Conversation in Hell