Since the deep freeze and two winter storms rolled through Texas earlier this month, disrupting power grids and knocking out power and heat to millions, homeowners and businesses have been swamped with broken pipes with the urgent need for plumbers.

The Arctic blast swept through the state cut power to millions of customers, with estimates of 15 million people had no electricity for days as temperatures were well below freezing. Across much of the state, some homes and businesses were not properly winterized for cold weather, experienced broken water pipes and values that caused immense damage.

Accuweather estimated last week that total damage and economic loss for the Lone Star state could be billions of dollars.

At the tail end of the crisis when power was being restored, around last Thursday, we showed readers how internet search trends for “pipe burst” erupted across the state. 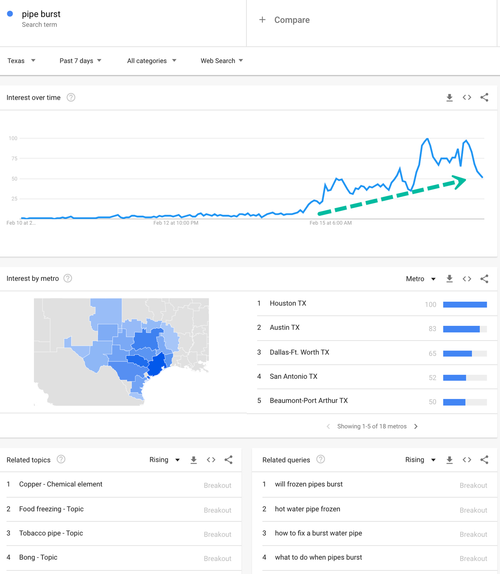 It’s like when roofers are in high demand after a major hurricane; plumbers are being called up at once, and due to the high number of residential and commercial structures that sustained broken pipes, the state is lacking these handymen or women.

In response, Gov. Greg Abbott has waived regulations for some plumber apprentices to work without direct supervision to help those in need. Out-of-state plumbers are being welcomed to assist in the storm-ravaged region.

Plumber Andrew Mitchell drove his family 22 hours from Morristown, New Jersey, to Houston with a truckload of pipes, according to WaPo. 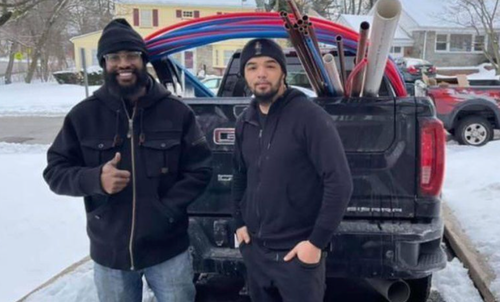 Mitchell and his brother-in-law recently turned-apprentice, Isiah Pinnock, worked around the clock to fix broke pipes and other damage.

Mitchell told WaPo it was a “no-brainer” to make the quick transition to Texas. They saw an unprecedented need for plumbers on Facebook groups, along with horror stories of how broken pipes devastated many homes. Readers may recall, we documented some of the damage in a note titled “Is Texas Facing A Humanitarian Crisis?”

Mitchell is one of many plumbers who have made the journey to Texas. Out-of-state plumbers can submit an application that requires them to provide their licensing information and insurance coverage that satisfies Texas state standards.

Frank Denton, chairman of the Texas State Board of Plumbing Examiners, said because demand is so high, his agency worked hard to approve out-of-state plumbers to meet soaring demand.

“We are certainly inviting them to come to Texas. That’s for sure,” Denton said. “As a result, we’re trying to expedite and make it as seamless as possible.”

With more than ten million people without a job nationwide- perhaps the silver lining here is that plumbers and handymen are in high demand in Texas.