One of the biggest winners from the current massive market bubble (in the words of Jeremy Grantham) in addition to tech stocks and SPACs of course, has been the sheer fraud that is ESG, which while noble and delightfully virtue signalling in theory, is anything but ESG as we explained on several previous occasions, but is merely a collective mania to allocate funds to a handful of high growth and tech names (many of which have principles that are directly opposed to the core tenets of ESG). In reality, the real attraction of the SCAM ESG mania are not its fake Environmental, Social, and Governance aspirations, but rather the fact that investors have a collective green light to plow into a handful of megacap stocks creating a “hedge fund dinner” halo, and push the “cool, hip, new” space ever higher due to concentrated inflows (while leaving the bulk of truly virtuous stocks in the dust) and generating massive returns and huge bonuses for a handful of investors who get the added benefit of being shielded from populist anger by pretending they are working for the common good.

Thank of it as the manipulative Libor cabal, but with the added benefit of pretending you are doing something good for the world (spoiler alert: you aren’t).

But not everyone has been fooled by this bubble-era fraud.

On Tuesday, the commissioner for Texas’s powerful energy regulator slammed the “woke” ESG fraud, and said the newfound popularity of ESG investing could result in record industry bankruptcies and the loss of millions of jobs while doing little to help the environment.

Wayne Christian, a republican who sits on the three-person Texas Railroad Commission, said the goal of taking environmental, social and governance factors into account is to deprive “legitimate” companies of necessary investment “because they, in the opinion of some, cause some indirect or amorphous social harm.” He is, of course, spot on.

Radically environmentalists aren’t stopping at fighting for increased regulation and unfair treaties. They are coming for your retirement account as well vis-à-vis Environmental, Social, and Governance investing, the new “woke” way to save money. It is an investment strategy whereby an individual investor or financial products, such as mutual funds, invest assets in equity of a company or financial products that are subjectively considered environmentally and socially conscious.

In practice, this strategy has caused the divestiture of assets from oil and gas production companies. The goal of ESG investing is to deprive legitimate companies with widely used products and services from necessary capital investment because they, in the opinion of some, cause some indirect or amorphous social harm. ESG investing could cause record bankruptcies in the U.S. energy sector, destroying millions of high-paying jobs and American energy independence.

All without removing any of the environmentally harmful energy produced by state-owned companies directed by tyrannical governments.

Christian’s press release posted on the commission’s website comes as oil and gas companies are finding themselves under increasing pressure to tackle emissions from their operations. Earlier on Tuesday, Exxon Mobil, formerly the world’s biggest company and now fighting to preserve its popular dividend, released emissions data on customers’ use of its petroleum products for the first time.

“As you can see, despite the claims of the sensationalist, fake-news media, the environment in America is getting better, not worse. At the same time, prior to the pandemic, we were producing more oil and natural gas domestically than any time in history, creating jobs, helping our economy, and bringing us national security in the form of energy independence” Crhistian blasted.

“Unfortunately, environmental extremists are seeking to undo these tremendous gains on every front. We all know about their efforts politically on the national level with proposals like the Green New Deal, fracking bans, carbon taxes, and the Paris Climate Accord, which President-Elect Joe Biden plans to rejoin. This would be a tremendous mistake. The accord carries sky-high costs with very low benefits and unfairly imposes a double standard based on unproven assumptions and climate models that are wrong nearly all the time.”

Christian’s outburst comes as the commission itself has come under fire itself from some investors and producers for failing to take aggressive action on clamping down on the routine flaring of natural gas.

Christian also castigated the French government for putting pressure on Engie to scrap a $7 billion long-term contract to buy liquefied natural gas from U.S. exporter NextDecade Corp. because of concerns over emissions.

“This misplaced concern about emissions will do more harm than good,” he wrote, since France will now have to secure fuel supplies from less reliable partners where few if any environmental safeguards are in place.

Sadly, Christian’s appeal to common sense will have zero impact on shifting Wall Street’s capital allocation, since so many investors have found a delightful niche in the form of ESG, allowing them to keep putting other people’s money into what is the “bubble within the bubble” and collecting a generous performance fee every year, knowing full well that when the bubble bursts, ESG will implode and all “virtuous” investments will be promptly forgotten as capital preservation becomes the only game in town.

Until then, however, the fake show must go on. Meanwhile, for those wondering just what all the excitement is above, please try hard not to laugh when reading the following list of the most “socially responsible, environmentally safe, aggressively progressive” companies that one buys when one investing into the “Green”, aka ESG scam, courtesy of Bank of America. 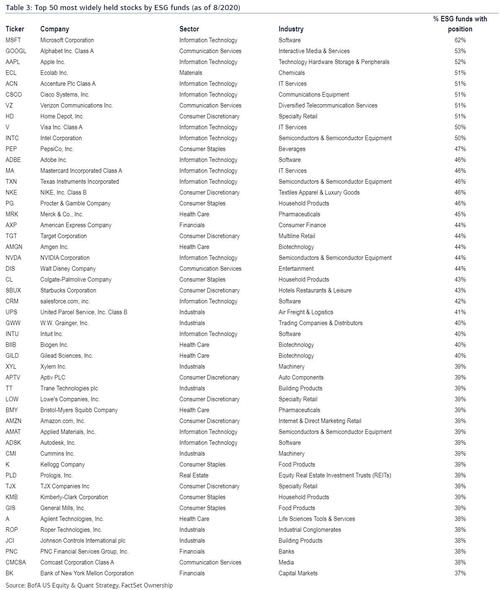 Impossible, you say. Nobody can be that hypocritical… surely Bank of America has made an error? Well, no. As confirmation here are the Top 10 Holdings of the purest ESG ETF available: the FlexShares ESGG fund. Below we present, without further commentary, its Top 10 holdings. 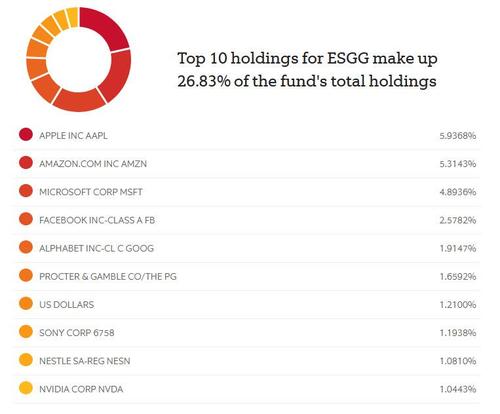 The punchline of course, is that this gimmick actually works – as the following slide from JPMorgan shows, ESG is now all the absolute rage on both earnings calls, where it has become one of the most popular terms among virtue-signalling companies, and has also seen a tremendous increase in capital inflows by various alternative investment funds. 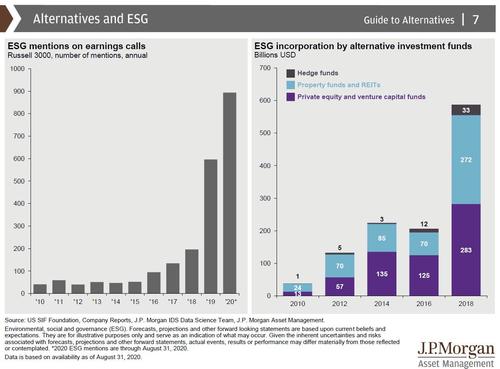 Or perhaps it isn’t humans that are that gullible but only the robots:  as BofA notes, passive ESG funds have been gaining assets at a much faster rate than the active ESG funds. 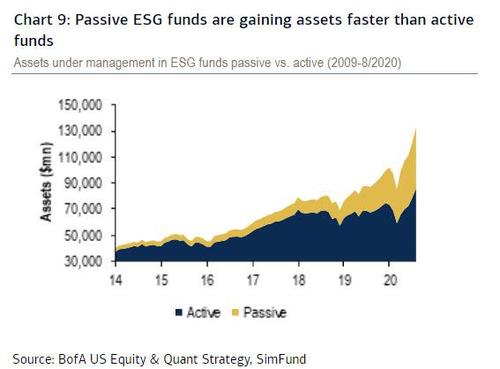 Which just happens to be the real goal behind the artificial ESG facade.

Almost two centuries ago, PT Barnum said “there’s a sucker born every minute.” Little did he know how appropriate that phrase would be more than a hundred years later to describe investors in the virtue-signaling craze that has taken over markets today.

Is Dogecoin The Perfect Currency For The United States Of America In 2021?