The Decline & Fall Of Dollar Hegemony

The US dollar’s position as the dominant global reserve currency is an immensely important factor in supporting the ballooning US government debt, the Fed’s drunken money-printing, and Corporate America’s ambition to offshore production to cheap countries, thereby creating huge and ever-growing trade deficits. They all have become dependent on the willingness of other central banks to hold large amounts of dollar-denominated paper. But from the looks of things, those central banks might be getting a little nervous.

The global share of US-dollar-denominated exchange reserves – US Treasury securities, US corporate bonds, US mortgage-backed securities, etc. held by foreign central banks – fell to 60.5% in the third quarter, according to the IMF’s COFER data release. This is the lowest since 1995. Over the past six years, the dollar’s share has been dropping at a rate of about 1 percentage point per year: 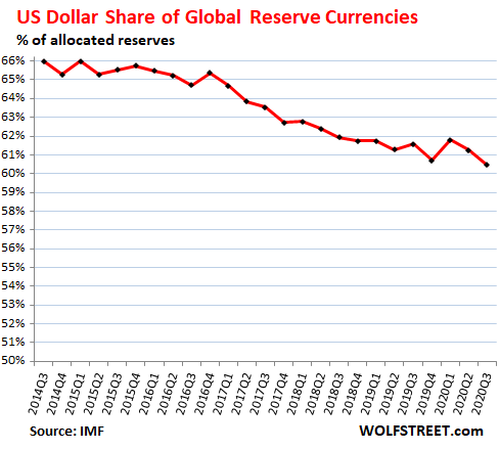 The decline in the dollar’s share began 20 years ago when the euro assumed the place of the predecessor currencies, including the Deutsche mark, that used to be in the basket of foreign exchange reserves. But that 20-year 10-percentage-point decline pales compared to the near 40-point plunge in the dollar’s share from 1977 (85%) to 1991 (46%), which was followed by the 25-point surge till 2000.

For now, the motto among these central banks, jointly, seems to be: easy does it. No one wants to trigger a sudden crisis (2020 = Q3): 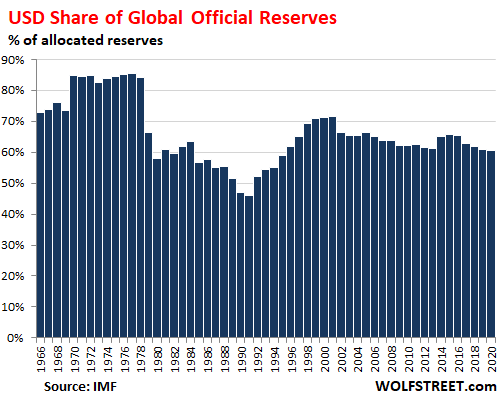 The euro stuck at a 20% share. Dreams of “dollar parity” put on hold till further notice.

The combined countries of the Eurozone have had a large trade surplus with the rest of the world, and particularly with the US. Their currencies were already reserve currencies. So ever since the euro became an official currency, and with its members expanding from originally 5 to now 19, there was talk about the euro eventually reaching “parity” with the dollar as a reserve currency. But the Euro Debt Crisis put an end to that talk when euro-denominated sovereign debt, issued by Greece, defaulted.

The euro’s share has since been stuck in the range between 19.5% and 20.6%, though the Eurozone now comprises 19 member states. In the third quarter, the euro’s share was 20.5%. The euro was the last effort by a single currency to dethrone the dollar.

The RMB became an official reserve currency in October 2016, when the IMF included it in its basket of currencies that back the Special Drawing Rights (SDRs). There has been talk that it would be the next currency to dethrone the dollar. But by the looks of it, this will require more patience than mortals are expected to possess.

If the share of the RMB continues to rise at the pace of the past two years, it will take 110 years for it to reach 20%. At this pace, it’s not going to be a threat to the dollar in the expected lifetime of the average Gen Z member. But things move slowly until suddenly they move fast; and we can’t draw a straight line for 110 years. The RMB is the short red line in the spaghetti near the very bottom (more on that spaghetti in a moment): 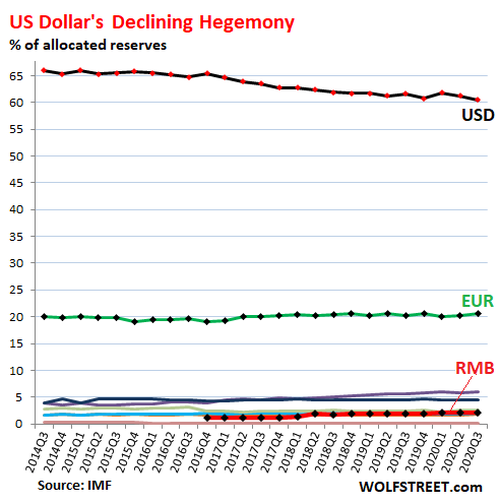 The rise of the Japanese yen.

To look at the spaghetti at the bottom in the chart above, we have to pull out our magnifying glass, and the chart below does that. What sticks out is the rise of the yen, now at a share of nearly 6%, up from 3.5% in 2015, far outpacing the rise of the RMB. This has made the yen the third largest reserve currency.

Japan is fiscally in the worst shape of any country in this group, or of any major country; and Japan has also been the most relentless money printer of any major country. But it normally tends to have a large trade surplus with the rest of the world, and faith in the yen, including by the Japanese themselves, has remained unshaken.

The share of the pound sterling (GBP) has remained roughly flat at 4.5%, despite the Brexit chaos since 2016, making it the fourth largest reserve currency. 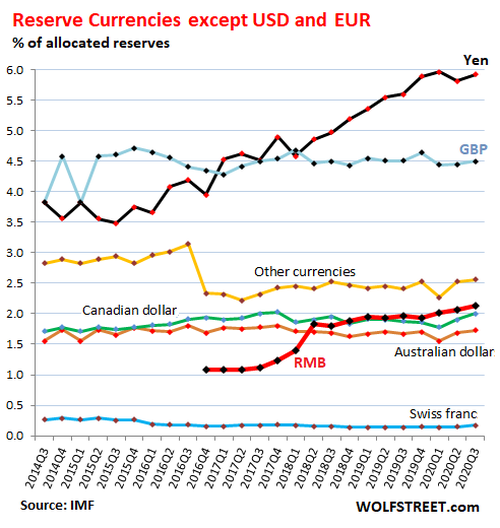 If the dollar’s status as top-dog global reserve currency deteriorates a whole lot, it would shake up that equation. At the pace of decline of the past six years, it would take a decade for the dollar’s share to drop to 50%, with other currencies picking up the slack. But for the equation to be shaken up, the dollar’s share would likely have to drop well below 50%.

“Easy does it” is still the motto with reserve currencies. And it works until suddenly, for whatever reason, things go off the rails. But until something does go off the rails, the movements are slow and steady and span decades.

An increasingly important question, because someone always has to buy this debt – and it’s not just the Fed. But the share of foreign holders is waning. Read… Who Bought the Monstrous $4.2 Trillion Added to the Incredibly Spiking US National Debt in 12 Months? Everyone but China

The Media And The Mayhem: The Chauvin Trial Coverage Follows A Dangerous Pattern