The European Union: From A Single Market To A Tragic Farce

Concerning the European Union, opinions are divided between those who consider it useless and costly, and those who believe it to be the future of Europe and a model for the human race. 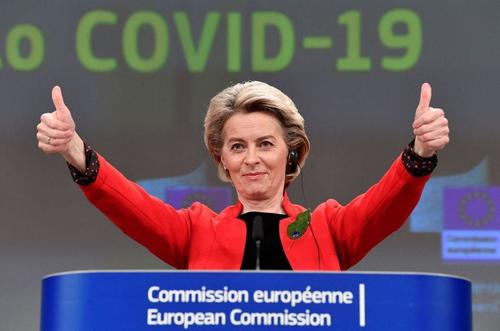 What is the reality?

Before today’s EU emerged, the construction of a European union was, at first, a tremendous success.

Many liberals have a short memory, but the EU has not always been the big, remote machine it has become. In the era of the more modestly named “European Communities” – entailing, for example, cooperation amongst multiple countries’ economies; or within their coal, steel and nuclear industries – Europe achieved four freedoms of movement: those of people, capital, services and goods. Despite its flaws, shortcomings and innumerable imperfections (nothing human is perfect), this common – or single – market made a massive and substantial contribution to the freedom and prosperity of Europeans.

It is impossible not to consider as progress that a French citizen can move freely in Italy or that a Spanish entrepreneur has the right freely to offer services to citizens of the Netherlands. The original European common market was in every way in line with Jean Monnet’s constructive concept of “peace through prosperity.”

The problem was that the ideologues of all creeds could not be satisfied with this Europe as a mere tool, one that was essentially economic in nature. No, it was necessary to add a political Europe, a social Europe, a Europe of defense, a European foreign policy, an ecological Europe and even a geopolitical Europe.

This evolution consisted, first of all, in subverting European institutions to make them accomplish, in addition to their economic aims, missions that were foreign to them, such as a “common foreign policy” that was never anything than words. How could you have a foreign policy common to the UK, Austria and Portugal?

Next, the institutions and procedures were, and continue to be, constantly adapted, renovated and revolutionized to serve extra-economic ends — such as “peace”, “combat social exclusion”, “promote scientific and technological progress”, “security and justice” — even at the expense of economic ones.

Today, the economic purpose of the European construction has been officially reduced — through treaties – to the bare essentials, aiming at “a sustainable development based on balanced economic growth and price stability” and given over to the demands of political, social and environmentalist Europe. Such demands begin, for example, with the European Green Deal that aims to turn Europe into the first “climate-neutral” continent by reducing Europe’s greenhouse gas (GHG) emissions to “net zero” by 2050, even if the economic consequences to Europeans are unsustainable. According to IndustriAll, the federation of European industrial trade unions, there is a great risk that the European Green Deal will put entire industrial sectors on their knees, slashing millions of jobs in energy-intensive industries, without any assurances that workers in affected industries will have a future.

Thus, the EU, which in the past offered a counterbalance to the anti-economic fury of its member states, is now the permanent amplification of this fury.

No resolution concerning gender or environmentalism adopted by the German or French parliaments can compete with the increasingly extreme proclamations adopted on these subjects, as on others, by EU institutions. For example, the mainstreaming of the most extreme version of the gender theory — the idea that “male” and “female” are cultural, not biological, concepts — is now the official policy of the EU.

What allows these European institutions to go further and further down the path of ideology is that they escape democratic sanction, since the EU remains first and foremost an intergovernmental organization. Germany’s Federal Constitutional Court diagnosed a “structural democratic deficit” in the construction of the European Union, in that the decision-making processes in the EU remain largely those of an international organization. The decision-making is based on the principle of the equality of member-states. The principle of equality of states and the principle of equality of citizens cannot be reconciled in the EU’s current set of institutions, the Court said. Of course, EU institutions are dressed up with flowery language — such as “making the EU more democratic” according the Lisbon Treaty — aimed at making people believe that EU institutions, although imperfect, are increasingly democratic and only waiting to become fully democratic.

What percentage of European citizens is capable of naming even one Member of European Parliament, European Commissioner or European Court of Justice judge? Americans feel American before being from Wyoming or Arkansas; while Italians, Spaniards, Swedes, Poles and Slovenes identify with their country before feeling European (in the generic sense of the word, not referring to the EU).

For historic reasons, Germany abides as much and often as possible by the EU rules and institutions. As was noted by Ulrich Speck:

“The country has built its political identity and its political system on the concept of being the opposite of the Nazi state. Germans today see the Nazi regime, among other things, as a radicalized form of classical power politics—something that they consider themselves lucky to have left behind.”

In other words, many Germans see the EU as the ultimate antidote to the hegemonic tendencies of their past. While they managed the first part — the mitigation — of the recent pandemic relatively well, they decided to rely on the EU for vaccine management. There is logic in this approach: first, we are stronger together in negotiating with “Big Pharma,” and, also, isn’t this an opportunity to prove to Europeans that this EU that they do not like is at least useful?

Not content with being useless and costly, as in the case of vaccinations against COVID-19, the EU has shown itself to be horribly, comically and tragically ineffective. AstraZeneca, for instance, simply “informed” the bloc that it would not be able to supply the number of vaccines the EU had hoped — and paid for —by the end of March. EU leaders were “furious” that the company appears to be fulfilling its deliveries for the UK market and not theirs. The result of the EU’s inability to uphold the commitments made to it by vaccine manufacturers is without appeal or recourse: 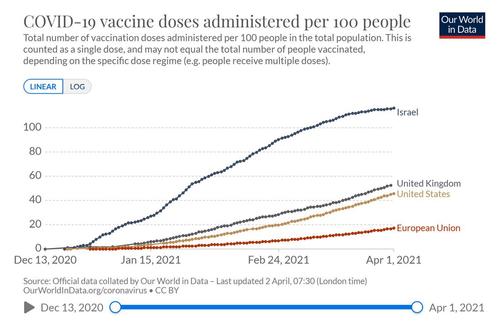 (Source: Our World in Data)

Five hundred years from now, when historians look back on the COVID era, they will say that America’s “Operation Warp Speed,” under President Donald J. Trump, was a triumph of science and logistics.

While it took five years to develop a vaccine against Ebola — the previous world record — it took less than a year in the West to develop several vaccines against COVID, mainly under pressure and with funding from United States taxpayers. Soon the U.S. government realized that the challenge was also logistical; it is all well and good to develop a vaccine, but it also has to be produced in large quantities and then distributed.

At the request of the US government, entire factories were built in a matter of months to produce the vaccine (which had not yet been developed at the time), in an effort whose breadth and scale were not unlike the U.S. industrial war effort of 1941. When it came time to distribute the vaccine, the U.S. government used the best tool at its disposal: the U.S. military. In the end, the U.S. mass vaccination program is being carried out in an unprecedented time frame; President Biden said at the beginning of March that the U.S. will have enough vaccines to inoculate every American by the end of May — two months earlier than previously expected.

Compared to the United States, the EU’s failure is total. While in Europe, the challenge was only to produce and distribute the vaccine, the EU failed miserably on both counts. The European vaccination program now lags far behind the U.S. program and even farther behind those of Israel and post-Brexit Britain.

According to current data, the return to normal in Europe will be one year behind that of America and the United Kingdom. This year represents a cruel multitude of deficits, bankruptcies and personal disasters. It portends, in relative terms, a massive economic regression awaiting the EU, compared to the rest of the world.

The EU’s vaccine management is a metonym for the EU: a tragic farce in the hands of ideologues as obtuse as they are inefficient. EU elites are weak, cowardly and pusillanimous because they know they do not represent anyone, in the true democratic sense of the word – they are not democratically elected, they are not transparent and they are not accountable to anyone. They are ultimately the playthings of governments that never agree with each other – but that do have the legitimacy of being truly democratic: elected, transparent, and accountable. There is also no mechanism for citizens to unelect anyone, should they wish to do so.

Common wisdom would dictate reducing the EU back to a single market, one territory without any internal borders or other regulatory obstacles to the free movement of goods and services. The ideological hubris that animates European institutions and their ideological sponsors will push them in the opposite direction – that of ever-greater centralization – at the expense of the European people and their vital interests.

WAYNE ROOT: A Christmas Message for President Trump: You Must Win Now, You Can’t Win in 2024