Rob Arnott of Research Affiliates is offering up a much needed reality check for the EV space.

Current valuations in EVs are due to “pricing delusion”, Arnott said in a new paper calling EVs the “Big Market Delusion” this week. “The electric vehicle industry, with its astronomical growth in market-cap over the 12 months ending January 31, 2021, is a prime example of a big market delusion,” he wrote. 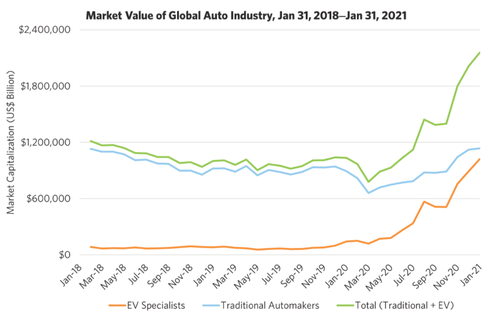 In his paper, he defines a big market delusion as “when all the firms in an evolving industry rise together, despite that fact that they are competing against each other.” He used airlines as an example of the BMD in the past. Technology “does not translate into great fortunes for investors unless it is associated with barriers to entry that allow a company to earn returns significantly in excess of the cost of capital for an extended period,” he argued.

He also singled out the valuation of Tesla, which had grown to be “almost on par” with the $1.1 trillion value of traditional automakers. “At that market capitalization, Tesla accounted for about 75 percent of the total EV group’s market value and 35 percent of the market value of the entire auto industry. Such an immense market capitalization makes sense only if the expectation is that Tesla will come to dominate the entire auto industry, not just the EV market.” 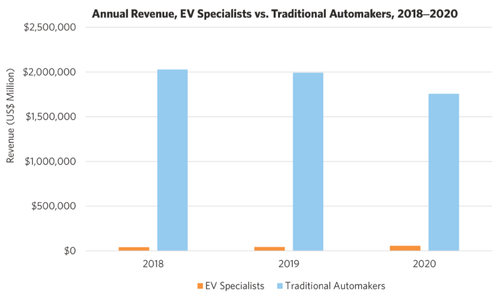 Arnott said that valuation only makes sense if Tesla is taking away market cap from other auto manufacturers, which it isn’t. “However, the reverse is true. While Tesla’s stock price has been skyrocketing, the prices of competing EV firms have been too.”

“All of these companies are priced as if they are going to be huge winners, but they are competitors. They cannot all assume dominant market share in the years ahead!” The group argued that auto valuations are “simply not sustainable over the long term”. 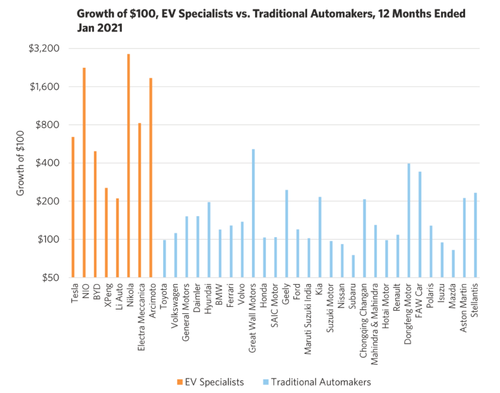 The paper concluded by stating: “In our view, today’s electric vehicle industry is a classic example of the big market delusion. The EV phenomenon will not change the fact that the auto industry will remain highly competitive and capital intensive, and not every company can be a winner.” 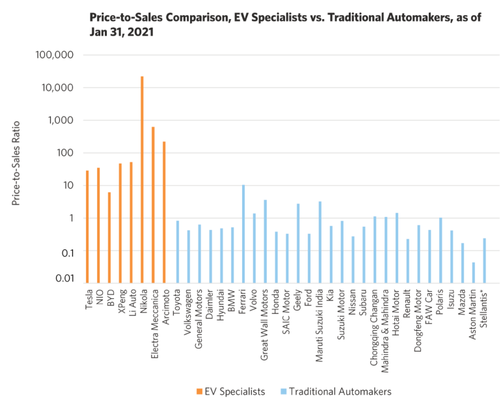 It continued: “Further, it remains unclear how simply switching the means of auto propulsion will make the entire light EV market more profitable, an assumption the market is now currently making. We suspect that as EV competition heats up, many companies will fail, as was the case in previous industry booms—whether autos, airlines, or technology—and with time the total value of the industry will recede to more reasonable levels.”

Power Outside The Matrix: My Tutorial on Disinformation

The Last 12 Months Saw Foreigners Buy The Most US Stocks Ever, China’s Buying USTs Again