The Fed Has Convinced Investors That It Will Tolerate Higher Inflation

Suppose inflation surprised and nobody cared

March CPI inflation came in like a lion and went out like a lamb, all in a day. The 0.34% m/m print on core inflation is the highest since 2006, other than July and August 2020, which were the bounce back from anomalously low readings during the height of the COVID-19 shutdowns 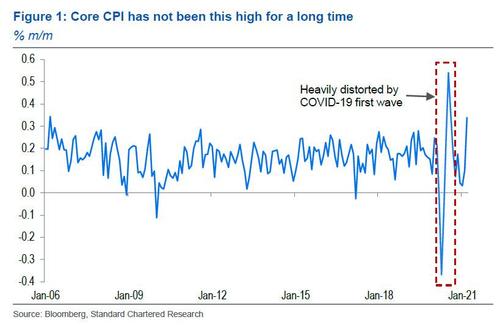 But 10Y UST yields edged up briefly after the 8:30AM EDT release and were below their pre-8:30AM levels by 8:32AM. Inflation breakevens rose initially, but real yields fell even more, pulling down nominal yields; eventually, breakevens came off as well. The USD fell almost immediately and continued falling most of the day.

The Fed appears to have convinced market participants that it is going to tolerate high inflation at least in 2021, acting on its flat Phillips curve, flat labor-market view. Many Fed speakers have essentially labelled any 2021 inflation surge transitory. Investors do not necessarily believe that the Fed is correct in its assessment, but most investors see fighting the Fed for eight or twelve months as a losing proposition. Given the Fed stance, bond-market hawks are backing off until there is unambiguous evidence that the Fed is wrong or the Fed shows some sign of reconsidering its stance.

In retrospect, Fed Vice Chair Clarida’s statement that he would look at 2022 data to see if inflation pressure persisted was seen as message that the Fed was not likely to scrutinize incoming data for evidence that the inflation upturn could be more persistent than expected.

This change in market perception has implications for FX as well. Our medium- to long-term USD view is largely predicated on the expectation that the Fed will not permit yields to rise as much as activity and inflation would suggest. The market reaction to the CPI release (and earlier in April to the payrolls release) suggests market participants are buying into this view as well.

Strong demand, higher inflation and low yields tend to increase external imbalances and reduce the incentive for capital inflow. Earlier this year, expectations of stronger demand led to higher yields, and the unexpected upward adjustment in yields derailed our and the consensus short-USD view. The Fed’s success in capping market yield expectations has pushed real yields below -70bps and opens the door to renewed USD weakness if the moves are sustained. We had anticipated this renewed broad USD weakness in H2, but it could resume more quickly.

The RUB, NOK, ZAR, SEK, BRL, CAD, AUD gained the most after the CPI release, so commodity currencies did well on higher inflation outcomes. Gold, oil and non-oil commodities had a pretty good day, as might be expected when there is a whiff of inflation and interest rates (particularly real rates) fall. Safe havens such as the CHF, JPY and even EUR were about c.0.4%, so relative-value trades favoured high-beta currencies, although the outperformance was not as pronounced as earlier in the year.

Why did an upside inflation surprise lead to lower yields?

Going into the CPI print, consensus expectations had been edging up. The average y/y forecast for core was 1.54%, so there was a significant minority who expected the higher print, especially forecasters with the most recent forecasts. Nevertheless, the outcome was a surprise and there was no special factor to explain a ‘perverse’ bond market reaction to an inflation surprise.

We have noted at times that investors approach big anticipated market events such as FOMC meetings and US labour data with caution, often holding back on trades until the event has passed without a major shock. Once the event proves uneventful, investors feel comfortable entering positions that they had avoided in the run-up. At times when the surprise is modest, post-event trading can go in the opposite direction to the expected impact of the shock if that is the market bias. 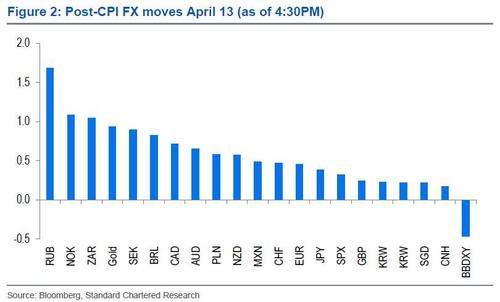 We think that the upward drift of yields in the two days preceding the CPI release may have reflected uncertainty on the market reaction to a high print as much as uncertainty on the CPI itself. Even though the surprise was higher CPI than expected, the market takeaway was that there was little reaction. This encouraged bond bulls to keep buying and signaled to bond bears that there was a low ceiling where yields were likely to head. Ever since the US labor release, we and investors have been carefully watching the market reaction to positive surprises as an indication of how much conviction there remains on the strong USD, short bond trade. Tuesday’s reaction signaled that an outcome that would likely have been viewed as deeply negative for asset markets a month or two ago is now viewed as benign.

Situational Awareness: Without This Skill You May Not Survive

AMA Lied – How Many Died?