The Federal Reserve and other central banks represent a clear and present danger to future financial stability. 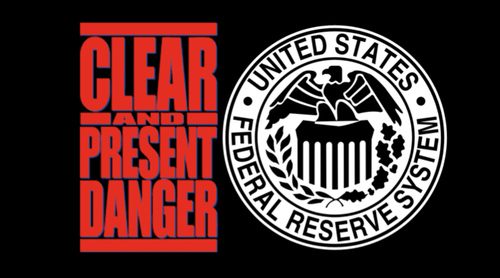 I’ve been saying for a while central banks are fueling an asset bubble and as global market distortions keep expanding week after week there’s no reason to back to walk away from that assertion but rather to stand up and scream the message from the rooftops especially now that central bankers are casually letting some key truths slip (intended or not).

Following up to the Alternative View and The Ugly Truth we got a stunning admission today from Philly Fed Chief Harker:

“The U.S. central bank may begin paring back its bond-buying program as soon as the end of this year, Federal Reserve Bank of Philadelphia President Patrick Harker said. “I could see, potentially, that occurring at the very end of 2021 or early 2022. But it is all going to depend on the course of the economy, which will depend on the course of the virus,”.“It could cause disruption in the markets if we try to do it too soon,” he said.”

There it is, the crux of it all. Not a disruption in the economy, in markets. For a central bank that claims to target the economy with its policies this statement reveals a keen awareness that markets are greatly influenced by the Fed’s QE liquidity operations, QE and otherwise, indeed are dependent on it and the fear of markets reacting is profoundly on the Fed’s mind.

It’s been my long standing contention that with the advent of the 2009 crisis and the Fed’s original intervention methods which were meant to be temporary the Fed has created a market monster that they need to keep feeding for fear it will eat their policy construct alive. A codependency of the worst kind as the market has become so large and disconnected that even a basic correction can be damaging to the economy. We saw this in during the Fed’s policy “mistake” when they were non accommodative for 3 months out of the last 12 years and market dropped hard into Q4 of 2018 immediately impacting retail sales badly.

This inability to extract itself from the policy construct has created a very unhealthy level of codependency. As Mohamed El-Erian comments:

I don’t think central banks quite realize how much irresponsible risk taking is going on. In 2010, Ben Bernanke talked about the benefits, costs and risks that come with unconventional policy. He added, the longer you maintain it, the lower the benefits, the higher the costs and risks. This was ten years ago. At that time, Bernanke was thinking of unconventional policy as an economic bridge. Now, it has become a destination.”

Hence that policy experiment of normalizing was immediately and apparently permanently abandoned following the market drop in 2018. Let’s not forget the Fed under Yellen was ever so cautious in raising rates and ever so careful in reducing the Fed’s balance sheet between late 2015 and 2018. Indeed I would argue the only reason they were able to do any of it was under the cover of $5.5 trillion in QE flooding global markets induced by other central banks and the liquidity infusions coming courtesy of corporate tax cuts in 2017.

All this ended in 2018. Now due to Covid the Fed and other central banks went wild with liquidity and the monster has gotten even larger and angrier.

The market disconnects from the economy are larger than ever about to exceed 190% in market capitalization vs GDP making the year 2000 look like child’s play: 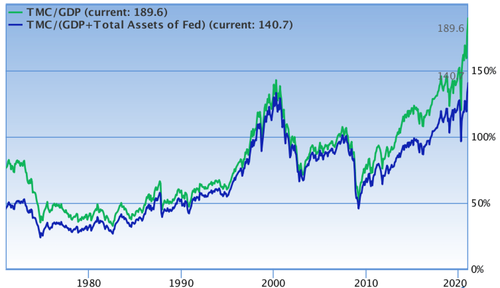 Everything has gone vertical.

Equities along with M1 money supply:

Oh, pardon me, that was $CSCO trading during the year 2000 tech bubble before entirely collapsing along with the rest of the tech bubble.

I must’ve confused the chart with that of $TSLA making Elon Musk now the richest person on planet Earth in just a matter of a few months:

Asset classes are exploding vertically all over the place.

Notable now also Bitcoin many of its adherents are vocally citing the Fed’s monetary perversions and the corollary destruction of the US dollar as a prime argument for owning bitcoin as a safe haven to protect purchasing power: 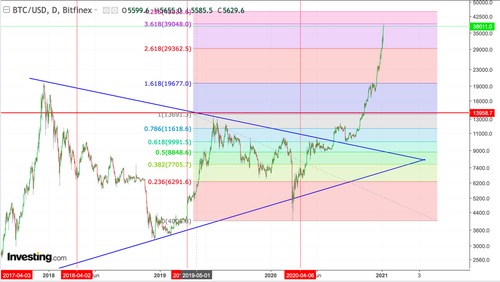 Small caps now sporting forward multiples north of 80 have also embarked on their own vertical journey:

Resulting in the highest disconnect from its 200 day moving average in history: 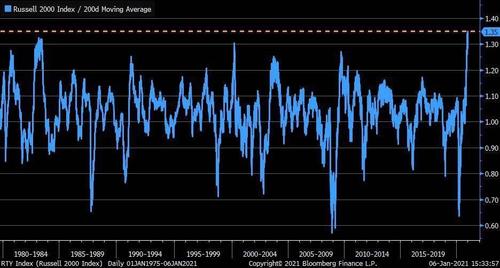 Also vertical? Price to sales, the highest ever read in the valuation metric ever: 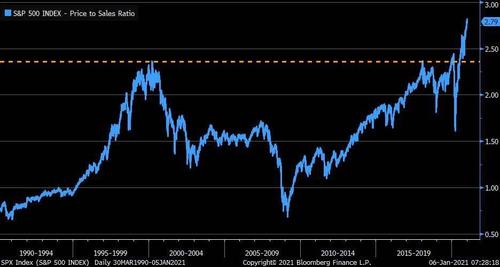 Nothing says bubble more than seeing prices the most disconnected from a mere sales basis, never mind earnings.

These are not trivial charts or events. They represent imbalances, excesses and distortions running through the entire market construct and they keep getting worse with each day of new record highs.

Vertical moves can be awe inspiring as we are witnessing them now, but they lead to distortions and imbalances that ultimately collapse bringing about massive damage and financial stability risks. Given how intertwined markets and the economy now are it is no wonder the Fed wants to avoid a market disruption.

The imbalances, excesses and distortions are the very same ones Fed governor Kaplan copped to in December:

This is the construct the Fed does not want to “disrupt”. I’d argue the Fed has already disrupted the market, to the upside. The Fed has created the very imbalance they are now afraid of disrupting.

The Fed is set on letting the loosest financial conditions in history and insatiable risk taking continue: 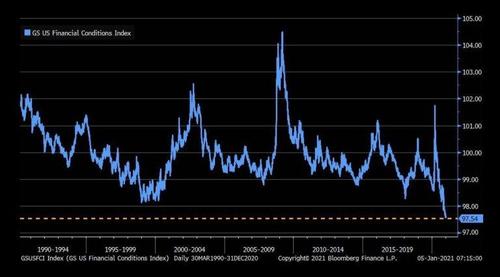 This asset bubble they have created is part of what they think is a calculated strategy to bring about inflation, even willing to let it run hot thinking they can control hot inflation:

Fed’s Evans: If Got 3% Inflation That Would Not Be So Bad
– Very Difficult To Imagine Out Of Control Inflation

I’m sorry, but the Fed hasn’t been able to control anything in recent years, from the failed attempt to normalize their balance sheet or rates, or the sudden repo crisis. Always behind the curve and overtaken by events in the real world the Fed continues to be forced to do ever more, entirely hapless on how to extract itself from the monster it has created.

Investors appear entirely comfortable with vertical charts and record imbalances, disconnects and valuations especially with the view that central banks continue to print record and low rates themselves justify these valuations via the risk free rate.

But the danger is that the risk free rate may not be so risk free for too much longer for, as one of the charts highlighted in the Alternative View, the yield curve is steepening:

In short: The market may disrupt itself before the Fed even thinks about thinking tapering its balance sheet purchases and this disruption potential represents a clear and present danger to the economy brought about by the very distortions the Fed has induced with its excessive intervention policies.

The Fed is the danger, but it appears to be too arrogant to realize it.

Ukraine War! What Is It Good For? Propaganda