On Monday, the nexus of reserve currency helicopter money, the Federal Reserve, announced that it had sent $88.5 billion in so-called “profits” (i.e., interest income from all those bonds it “purchased” after creating digital money out of thing digital air) to the U.S. Treasury Department in 2020, a 61% increase from the previous year as lower rates held down the central bank’s interest expense despite the Fed’s unprecedented buying spree which boosted its balance sheet by over $3 trillion .

The Fed’s payments to the Treasury had fallen over the previous four years as interest rates rose, boosting the interest it paid on reserves, or money that private banks keep at the Fed’s regional reserve banks. The Fed also hilarious began shrinking its portfolio of assets, reducing its overall net income, an experiment which ended in catastrophic failure when it became clear that you can’t, in fact, taper a ponzi scheme as the Ghost of 1937 made an epic appearance in both Nov 2018 and then again in March 2020.

One reason why the interest payment in 2020 was so low despite the Fed’s $7 trillion balance sheet is that the Fed slashed rates to near zero sharply reducing interest payments on banks’ excess reserves, and its remittances to the Treasury.  Lower interest expense boosted the Fed’s net income to $88.8 billion in 2020, from $55.5 billion in 2019, according to preliminary estimates of the central bank’s annual financial statement, released Monday.

The Fed is required by law to use “revenue” – (ostensibly from buying stocks and never selling… we kid, we kid) to cover operating expenses such as funding its own police force, and send the rest to the Treasury’s general fund, where it is used to help cover the government’s bills. As such, the more debt the Fed monetizes and the higher rates rise, the more money the Treasury will get simply because the central bank of the world’s reserve currency has printed trillions in cash.

This, for those wondering, is literally the biggest money laundering operation in history, one which involves printing money out of thin air, using it to buy interest-paying securities, and then remitting the interest to a third party. And here it is in practice: over the past decade, the Fed has wired just over $838 billion to the Treasury. 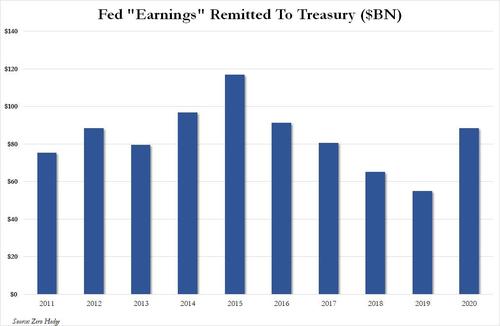 Which again begs the question: if the Fed can simply buy securities and send back the “profits” back to the Treasury, why is anyone still paying taxes?

Actually it begs another question: when, one day, rates turn negative and the flow of funds is reversed, will the Treasury start paying the Fed for its losses on securities?

Just What We All Feared