The Fed’s Most Convenient Lie: A CPI Charade

Authored by Matthew Piepenburg via GoldSwitzerland.com,

Despite a penchant for double-speak that would make a politician blush, the Fed tells us that its primary focus is unemployment not inflation.

Let me remind readers, however, that an openly nervous Mr. Powell came out in the summer of 2020 with a specific, as well as headline-making, agenda to “allow” higher inflation above the 2% rate.

This “new inflation direction” ignored the larger irony that the Fed had been unsuccessfully “targeting” 2% inflation for years before changing verbs from “targeting” to “allowing.”

If, for example, the Fed was honestly “targeting” inflation to no success for years, how could Powell suddenly have the public ability to then “allow” more of what he failed to achieve before, as if inflation was as simple to dial up and down as a thermostat in one’s home?

The blunt answer is that the Fed, in sync with the fiction writers at the Bureau of Labor Statistics (BLS), reports consumer inflation as honestly as Al Capone reported taxable income.

In short: The Fed has been lying about (i.e. downplaying) inflation for years.

As we’ve shown in many prior reports, the Consumer Price Index (CPI) scale used by the BLS to measure U.S. consumer price inflation is an open charade, allowing the BLS, and hence the Fed, to basically “report” inflation however they see fit—at least for now.

If, for example, the weighting methodologies hitherto used by the Fed to measure CPI inflation in the 1980’s were used today, then US, CPI-measured inflation would be closer to 10% not the reported 2%. 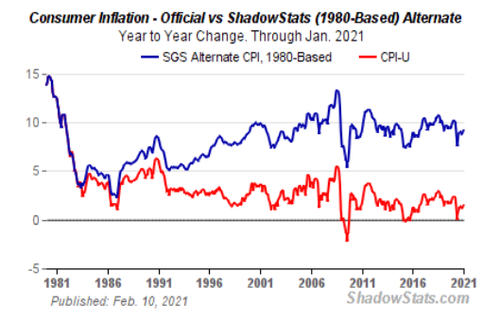 Concerned about by rising consumer costs, the Fed simply tweaked its CPI scale for measuring the same, effectively downplaying rising costs like a fat-camp scale which downplayed the significance of say… beer, chocolate or pizza.

In short, the Fed didn’t like the old CPI scale for measuring inflation, and so they simply replaced it with one in which 2+2 =2.

But why all the mathematical gymnastics and creative writing at the current BLS and Fed?

What explains the ongoing double-speak wherein the Fed wishes to target higher inflation yet simultaneously and deliberately mis-reports it at far lower levels?

Necessity: The Mother of Invention.

The Fed, in deep need of keeping its IOU-driven (i.e debt-driven) façade of “recovery” in motion, has no choice but to invent a respectably controlled (i.e. LOW) CPI inflation rate in order to make US Treasury bonds look even moderately attractive to others.

After all, the US lives on those IOU’s. They need to look pretty.

If, however, the more honest and much higher 10% inflation rate were honestly reported on an honest CPI scale, the inflation-adjusted yield on the US 10-Year Treasury would be negative 8%–which hardly makes it a pretty bond for the world to either admire or buy.

That’s a problem for Uncle Sam.

And so the Fed invents a CPI inflation number that is less embarrassing than reality. It’s just that simple.

By the way, if real yields on the US 10-Year were honestly reported at -8%, gold would be ripping to the moon right now (it skyrocketed in the 1970’s when real yields were -4%).

This is because gold rises fastest the faster real yields go negative.

We all know, however, that the Fed (and the bullion banks it serves) are terrified of rising gold prices, as a rising gold price confirms the absolute failure of their monetary policies and the open, and ongoing, debasement of the US Dollar.

This further explains why the world’s central and bullion banks openly manipulate the paper gold price in the COMEX markets on a daily basis.

Furthermore, given that the only thing that seems to be “healthy” in the US today is the biggest stock and bond market bubble in its history, the Fed wants to keep that bubble growing rather than naturally popping.

And toward this end, the Fed may be desperate, dishonest and delusional, but they aren’t completely stupid. 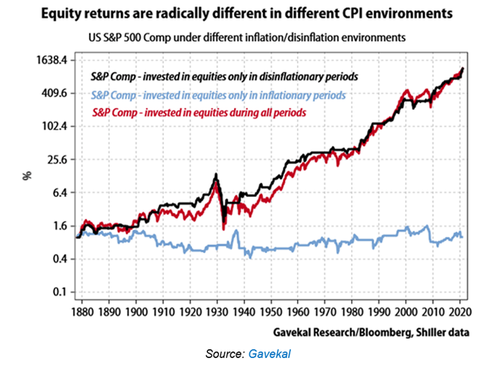 So, please don’t fall for Powell’s double-speak that he’s more concerned about focusing on employment than inflation.

The unspoken truth is that Powell (as well as Yellen, Bernanke et al) have been absolutely obsessed with inflation for years. They simply mis-report it (i.e. lie), as the dollar’s purchasing power continues its slow fall toward the floor of history.

Having Your Cake and Eating it Too.

What the Fed has been doing ever since Greenspan (the veritable “Patient Zero” of the current global $280T debt disaster) is very clever yet extremely toxic, as well as openly duplicitous.

Specifically, the Fed now prints over $120B per month (to buy $80B in unwanted Treasury bonds and another $40B in unwanted, toxic MBS paper) with no apparent inflationary effect (despite the fact that inflation is defined by money supply) beyond its 2% “allowance.”

Such extreme money creation openly dilutes the USD to inflate away US debt with increasingly diluted dollars, now a desperate as well as deliberate Fed policy.

But by simultaneously and dishonestly mis-reporting CPI inflation as they dilute the dollar, the Fed can inflate away US debt without having to make the inflation-adjusted yields on Treasury bonds appear too embarrassingly ugly (i.e. grotesquely negative) for circulation and consumption.

Such open fraud, of course, allows the Fed to have its cake (debased currencies to inflate away debt) and eat it too (by under-reporting the otherwise disastrous CPI inflationary consequences of such a desperate policy.)

In short, by putting lipstick on the pig of what would otherwise by highly negative real yields on an openly bogus Treasury bonds if the CPI inflation rate were accurately reported, the Fed can continue to live on more debt, more IOU’s and more dishonesty.

Such veiled inflationary dishonesty allows the U.S. to effectively extend and pretend as the US credit market marches forward like a veritable Frankenstein—that is dead, yet still marching, arms outstretched and moaning like a beast.

But Even Frankenstein Eventually Dies

Perhaps you’ve noticed that the bond market, despite all of Uncle Fed’s (and Uncle Sam’s) support, has been unhappy of late…

Bond prices are falling, and hence yields are slowly rising, yet again. Consider the seven-year yield:

Needless to say, the Fed (sitting on top of $30T in public debt) doesn’t like rising yields, as they force rising rates, and rising rates, which reflect the cost of money, scares the hell out of debt-soaked markets (and debt-soaked sovereigns) like those currently pretending “recovery” in the land of the free (but not free markets) …

Thus, as in the repo markets of late 2019, the Fed is slowly losing control of the narrative as well as the bond market, which means we can expect more money printing to buy those otherwise Frankenstein bonds in order to keep their yields down (or “controlled”)—the very definition of Yield Curve Control, or “YCC.”

But such yield (and hence interest rate) control, as we’ve written elsewhere, is a dangerous game of Russian roulette. The Fed may play for a while, but eventually there’s a natural market and currency-killing bullet aimed at its head.

That is, the only way to postpone a fatal rate spike is for the Fed to print more fiat dollars to buy more unwanted bond debt.

By extension then, the only way to keep bond and debt-soaked markets alive is to destroy the nation’s underlying currency by “over-printing” the same.

In short, the inflated markets may live under a YCC blade, but the currencies, well..they die by the same sword.

That of course, is having your cake, but not eating it…

And the Pablum Continues

Meanwhile, the pundits, FOMC propaganda ministers and BLS fiction writers continue to spew their theories and projections of a deflationary rather than inflationary future.

These peddlers of the surreal still prattle on about year-over-year CPI inflation comparisons, even noting that annualized CPI inflation may just break the 2% marker for the first time in almost 10 years.

This is almost comical, if it was not otherwise so tragic.

Because the entire inflation-deflation discussion, as well as data reports and projections, are ultimately meaningless if the very scale used to measure the CPI inflation is itself as bogus as that 42nd Street Rolex to which I so often refer.

And so, let the madness continue, let the creative writing, clever math and the equally distortive projections and pundits spin their tales about inflation “data” as we simply stare at the rising costs of health care, education, housing, stock and bond valuations or even the tolls on the George Washington Bridge.

In other words, if you want to see honest inflation, just walk out your front door—it’s everywhere, except that is, the open joke that is the CPI inflation scale.

The Fed, alas, is forward guiding, as well as dishonestly managing, more of the same debt-and-print madness masquerading as policy.

For owners of physical precious metals, of course, they can only bide their time and smile, as that same Fed is ultimately, and ironically, their best friend. 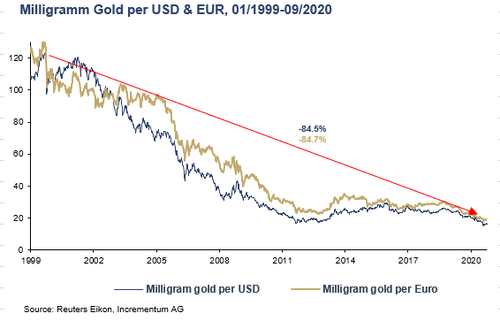 Eventually, once the jig is up regarding the current inflation lie and hence the equal lie about the real (i.e. “inflation”-adjusted) yield on Treasuries as well as the real (and massive) over-valuation of US stocks and bonds, the entire Fed experiment (of using debt to solve a debt problem) comes to a brutal and disorderly end.

That is, markets nosedive and faith in already diluted currencies does the same.

This is an ending which no one can time (it’s hard to fight a desperate Fed) but for which anyone can prepare by simply understanding the current and historical role of precious metals in an open setting of dying currencies and unsustainable debt.

Thereafter, the equally desperate “re-set” compliments of the very players who brought markets to and over the debt cliff which they alone created will likely come, as already telegraphed by the IMF under the illusory name of Bretton Woods II.

New debts will be created, and new digital currencies (redeemable only by central banks) backed in some measure by gold rather than more fiat coins, will likely become a new normal.

That, or the entire central banking system will be revealed for the open failure that it was, is and will be, as math-savvy historical figures from David Hume and Thomas Jefferson to Ludwig von Mises had warned years ago.

“Reset” or no “reset,” currencies will continue their slow death spiral, and gold, always patient, always REAL rather than virtual, will continue its rise above the semantic dust and financial rubble of a broken banking system and failed monetary experiment driven by delusion, myth and alas, blatant dishonesty, of which the CPI inflation scale is just one example among so many.

OffG is taking a short break…