The Fed’s “Until Something Breaks” Stance Is Back

By Ian Lyngen, head of US rates strategy at BMO Capital Markets,

As Biden’s fiscal bailout is deployed the political debate in Washington has now turned to exactly how the stimulus will be funded – a classic “who’s got the check?” moment to be sure.

It goes without saying that net Treasury borrowing is on the rise, owing in no small part to the Federal government’s response to the pandemic; now, the notion of a meaningful tax hike is on the table. It’s far too soon in the process for details to emerge, although as they do the market will develop a better sense of the extent to which the short-term upside from this weekend’s stimulus checks will be curtailed by larger income levies.

While topical, the issue of higher taxes doesn’t appear to be undermining risk assets at the moment as domestic equity futures put the S&P 500 up against record highs. With this backdrop, the Treasury market is slightly higher with a flattening tone. That said, the low-volume overnight session with little in the way of new fundamental information has functioned as simply a placeholder as the market awaits this week’s more meaningful policy events.

As the Fed approaches, we’re watching the 1.64% level in 10-year yields as not only last week’s yield peak but also the highest for the benchmark since early-February 2020. We’re retaining our 1.75% target as the optimism evident throughout a variety of markets is difficult to fade in the absence of any tangible reversal in risk. Moreover, Powell’s comfort with the recent backup in yields has functioned as a greenlight for the bear steepening. Lacking a more cautionary stance on the part of the FOMC, the US rates complex is poised to drift higher in yields unless and until there is a meaningful correction in other markets. Whether this is a result of crowding out as net Treasury issuance continues to balloon or a collective rethink of valuations as investors are faced with higher real yields (albeit still in decidedly negative territory) remains to be seen and is unlikely to be an issue that will be resolved in the near-term.

Instead, with the price action itself as the biggest contributor to the macro outlook, attention will be not only be on the Fed’s decision/statement this week, but also the updated economic projections. Despite the market pricing in the liftoff rate-hike in 2023, investors don’t anticipate this will be reflected in the SEP. Instead, any nuance on the updated assumptions regarding growth, inflation, and unemployment will represent the most meaningful insight from the event. Chances are low the Chair will meaningfully alter the official stance on the recent backup in yields, maintaining that as long as the move is driven by an improving economic outlook and inflation expectations, the repricing is for the ‘right’ reasons and thereby a healthy development. Needless to say, higher yields are good until they are not and it’s just such an inflection point that represents the more significant policy risk for the Fed.

As it relates to the FOMC’s willingness not to address the elevated rates complex, it appears that the “until something breaks” stance is back. In the current iteration, this implies the Fed will remain sidelined at least to the point at which greater clarity is evident as to the impact of the recent stimulus on economic momentum and the sustainability of the improving trends. We’re certainly sympathetic to the Fed’s reluctance to overdeliver in terms of policy accommodation in an environment where the bulk of the pandemic-related developments in 2021 has been decidedly positive. Between the Biden bailout, faster estimates of vaccine access, and a strong start to the year in terms of the pace of consumption – to say nothing of February’s impressive service sector jobs print – the Committee is reasonably well positioned to stay the course for the time being; even if such an outcome involves the risk of tacitly endorsing a further Treasury selloff at stage when investors are wary, if not worried.

It is Fed week and as the Committee heads to the virtual Eccles Building, Treasuries are in the process of evaluating the sustainability of the reflationary optimism which has brought 10-year yields back above 1.60%. The price action has in no small part been aided by the finalization of Biden’s $1.9 trillion stimulus plan and the beginning of the process of depositing a fresh round of $1,400 checks into the accounts of some 280 million domestic consumers. There is also the latest vaccine revelations to consider with 64 million people domestically (19.3% of the population) having received at least one dose, and the White House stating that inoculation will be made available to all adults who want it by May 1st. This rationale sidesteps the unknown that is the willingness of the populous to embrace the shot, but nonetheless, Powell and Co. must be content with the improving outlook, record high equities, and financial conditions that remain nothing if not easy.

As a finale to the pre-radio silence period, Powell’s latest remarks effectively take further accommodative action off the table at Wednesday’s policy decision. Given the durability of effective fed funds at 7 bp over the past several weeks despite ongoing downward pressure on repo rates, we also expect any adjustment to IOER and/or the ON RRP facility will also be shelved in favor of future meetings. This leaves the updated SEP and the degree to which the improving outlook has altered the central bank’s forecasts, and specifically the dotplot in 2022 and 2023, the operative unknown. The refresh to the 2023 dots will reveal the collective mindset of the timing of liftoff, even as the consistent refrain from the Committee has reiterated that accommodative monetary policy will remain appropriate for the foreseeable future. For context, the December dotplot (below) showed just five projections off zero by the end of 2023, leaving the median soundly at the ELB. In terms of price action, the belly of the curve will be most responsive to any recalibration of normalization timing following its latest underperformance as liftoff ambitions were brought forward. 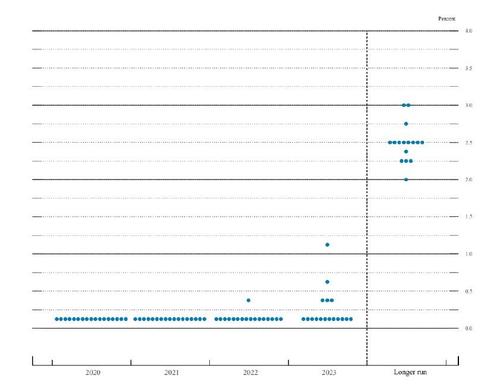 From a technical perspective, now that 1.624% has been traded through in 10s, subsequent support is an isolated yield peak from February 2020 at 1.682%. We continue to like 1.75% as a target beyond there if for no other reason than the market’s fondness of round numbers as well as the fact that line in the sand is effectively the middle of the August – December 2019 trading zone. This being said, an extension of the downtrade would face the headwind of a stretched momentum profile as stochastics in 10s are right up against oversold. Conversely, for resistance there is the 21-day moving average of 1.42% which is just ahead of the outset of the latest bout of selling at 1.378%. An opening gap is some ways off and still unfilled from 1.222% to 1.208%, through there, although barring a significant surprise from the Fed on Wednesday we are skeptical that zone is at imminent risk of being challenged.

The market discourse promises to be dominated by Fed musings, but let us not forget Tuesday’s retail sales print for February and the further clarity on the consumption landscape during the first quarter. We’ll be especially attentive to the control group given its correlation with consumption in the GDP figures. Current consensus is for a -1.1% monthly decline, however with the backdrop of January’s +6.0% surge, such a drop would be more rationalization than true correction. The impact of the last round of direct payments was on full display in the January figures, and with more checks in the mail, a repeat in March for an impressive quarter of consumption would certainly be keeping with the theme. We’re less convinced the bringing forward of spending brought on by the cash infusion holds sustainable implications for the longer term growth landscape as ‘normal’ gets underway and behavior in a post pandemic world take shape, but a resilient first half of growth in 2021 (and expectations thereof) could certainly  add to the bearish tone in Treasuries.