The Feedback Loop Between The Fed & The Elite

There is a belief the stock market is “making everyone rich.” The reality is that only a small percentage of the economy owning the majority of stocks. Such is the result of years of profligate monetary policy that created a feedback loop between the Fed and the elite.

Over the last decade, the “wealth gap” continues to widen. In 2019, the Peter G Peterson Foundation poll revealed a statistic we suspected for quite some time. To wit:

“A poll of likely voters for the Financial Times and the Peter G Peterson Foundation found 61-percent of Americans said stock market movements had little or no effect on their financial well-being.

Another article by the Economic Policy Institute also revealed the increasingly inadequate retirement savings of Americans and the dispersion of wealth among income earners.

Most recently, in December 2020, Visual Capitalist noted, when it comes to finances, the rich fared the best during the economic shutdown. 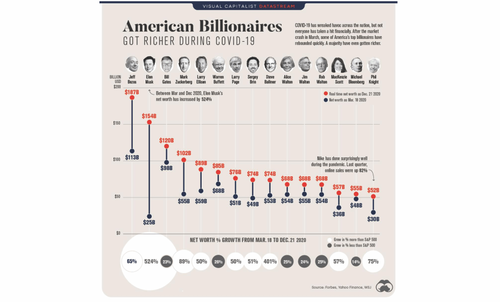 Between the March “pandemic” low and December of 2020, American billionaires grew their wealth by 57% on average.

Unfortunately, the bottom 99% of the population didn’t fare nearly as well.

More Evidence Of The Loop

The New York Times recently went further into the numbers:

Of course, a significant contributor to the “wealth gap” was the rise in the stock market fostered by trillions of liquidity injected by the Federal Reserve. As NYT noted:

“The affluent, of course, do tend to own stock, and the median net worth of the richest 10 percent of households rose 13 percent from 2007 to 2016 (the last year for which the Fed has released data). 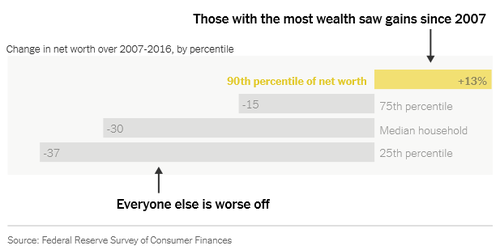 Another way to view this issue is by looking at household net worth growth between the top 10% and everyone else. 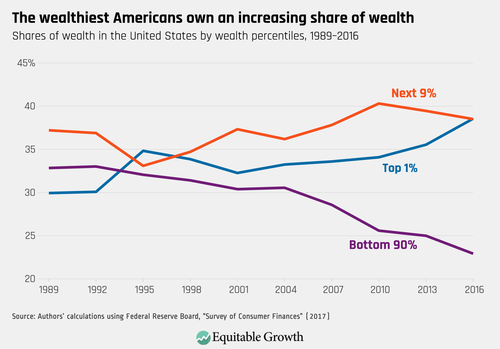 Such is more visible when you see that since 2007, the ONLY group has seen an increase in net worth in the top 10% of the population. Such is also the group that owns 90% of the stock market as discussed in “How The Fed Made The Top 10% Richer.” 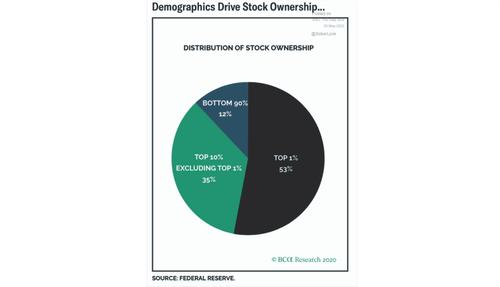 “That is not economic prosperity. It is a distortion of economics.”

Central Bank’s globally sought to stoke economic growth by inflating asset prices. Unfortunately, the consumption of the benefit was only those with savings and discretionary income to invest.

In other words, the stock market became an “exclusive” club for the elite.

While monetary policy increases the wealth of those that have wealth, the Fed mistakenly believed the “trickle-down” effect would be enough to stimulate the entire economy.

The sad reality is that these policies only acted as a transfer of wealth from the middle class to the wealthy. Such created one of the largest “wealth gaps” in human history. Via Forbes:

“‘The top 10% of the wealth distribution hold a large and growing share of U.S. aggregate wealth, While the bottom half hold a barely visible share.’ Fed economists wrote in a paper outlining the new data set on inequality. The charts show that ‘while the total net worth of U.S. households has more than quadrupled in nominal terms since 1989, that increase accrued more to the top than the bottom.’”

A recent report from BCA Research confirms the same showing the increase in wealth of the top 10% as compared to everyone else. 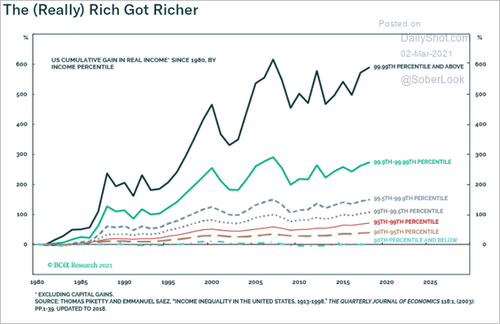 The current economic expansion is already the longest post-WWII expansion on record. Of course, that expansion came from artificial interventions rather than stable organic economic growth. As noted, while the financial markets have soared higher in recent years, it bypassed a large portion of Americans. Such was NOT because they were afraid to invest, but because they had NO CAPITAL with which to invest.

The ability to “maintain a certain standard of living” remains problematic for many forcing them further into debt.

“The debt surge is partly by design. A byproduct of low borrowing costs the Federal Reserve engineered after the financial crisis to get the economy moving. It has reshaped both borrowers and lenders. Consumers increasingly need it. Companies increasingly can’t sell their goods without it. And the economy, which counts on consumer spending for more than two-thirds of GDP, would struggle without a plentiful supply of credit.” – WSJ

I often show the “gap” between the “standard of living” and real disposable incomes. In 1990, incomes alone were no longer able to meet the standard of living. Therefore, consumers turned to debt to fill the “gap.” 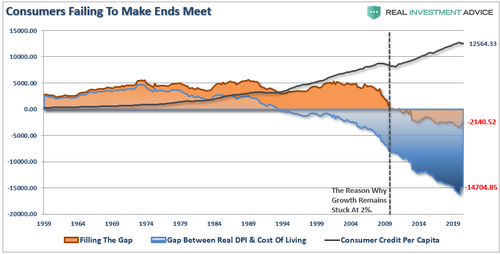 However, following the “financial crisis,” even the combined income and debt levels no longer filled the gap. Currently, there is almost a $2150 annual deficit facing the average American. (Note: this deficit accrues every year, which is why consumer credit keeps hitting new records.)

The Rest Have Debt

The debt-to-income problem keeps individuals from building wealth, and government statistics obscure the fundamental reality. We discussed this point in detail in the “Illusion Of Soaring Savings.”

The value of assets for all U.S. households increased from 1989 through 2016 by an inflation-adjusted $58 trillion. A full 33% of that gain—$19 trillion—went to the wealthiest 1%, according to a Journal analysis of Fed data.”  – WSJ 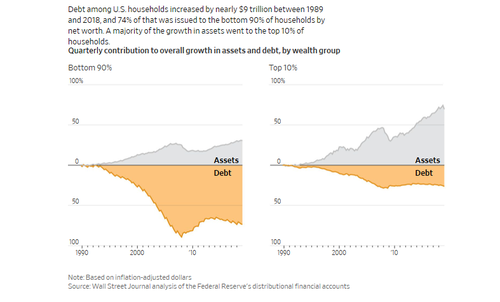 Of course, if the Fed’s actions to inflate asset prices worked, then wealth distribution would be more even. Importantly, we wouldn’t see more than 50% of Americans unable to meet a $500 emergency. 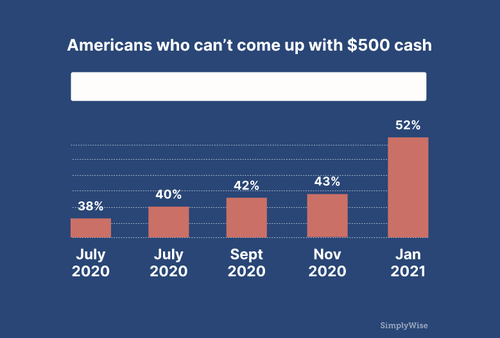 The single truth of a decade of monetary and fiscal interventions is this:

The Fed Does Have A Choice

The Fed does have a choice that could alter the current wealth inequality dynamic:

As the Fed’s balance sheet rises past $7-Trillion, they chose to impede the “clearing process” once again. By not allowing for debt to fail, corporate restructuring, and “socializing the losses,” they removed the risk of speculative practices.

Such has ensured the continuation of “bad behaviors.”

Unfortunately, given we have a decade of experience watching the “wealth gap” grow, the next decade will only see the “gap” worsen.

The obvious question we should be asking is:

“If we are in a booming economy, as supposedly represented by surging asset prices, then why are Central Banks globally acting to increase financial stimulus for the market?”

The trap the Fed has fallen into is that markets are predicated on ever-cheaper cash being freely available. Even the faintest threat that the cash might become more expensive or less available causes shock waves. 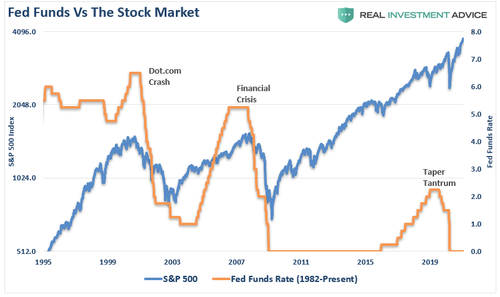 Such was seen in late 2018 when the Fed signaled it might increase the pace of normalizing monetary policy. The markets imploded, and the Fed halted its plan of shrinking its balance sheet. Then, during the pandemic, the Fed flooded the system with liquidity to halt a market crash.

The reality is the Fed has left unconventional policies in place for so long after the “Financial Crisis,” the markets can no longer function without them. Risk-taking, and the build-up of financial leverage, have removed any ability to “normalize” monetary policy. At least not without triggering violent market convulsions.

Given there is too much debt, too much activity predicated on ultra-low interest rates, and confidence hinging on inflated asset values, the Fed has no choice but to keep pushing liquidity until something eventually “pops.”

Of course, it will be the bottom 90% that absorbs the losses. As noted by Sven Henrich previously:

“In a world of measured low inflation and weak wage growth easy central bank money creates vast price inflation in the assets owned by the few making the rich richer, but also enables the taking on ever higher debt burdens leaving everyone else to foot the ultimate bill.”

“That is the measured outcome of the central bank easy money dynamic. After decades, it has now taken on new obscene forms in the past 10-years with absolutely no end in sight.”

For the world’s elite, their view of the world is far different than the reality the rest face.

Of course, this also explains much of the recent election outcomes.

When “capitalism” isn’t allowed to work for the “equality” of the whole, the populous will “vote” themselves “equality in misery.”