Just Energy’s shares crashed more than 21% in the premarket after the company released a statement about steep losses incurred during the winter storms that swept across Texas last week warning of doubts about remaining a ‘going concern’ (translation: it may not survive).

“The financial impact could change as additional information becomes available,” it said in the statement.

“Accordingly, the financial impact of the Weather Event on the Company once known, could be materially adverse to the Company’s liquidity and its ability to continue as a going concern.” 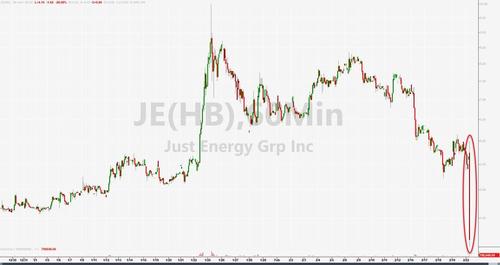 “The sustained high prices from February 13, 2021 through February 19, 2021, during which real-time market prices were artificially set at USD $9,000/MWh for much of the week, it is likely that the Weather Event has resulted in a substantial negative financial impact to the Company.”

The company warned the material impact could cause “liquidity” issues and raises doubts it can continue operating. It’s currently talking with top stakeholders regarding the impact of the weather event last week.

As we first discussed more than a week ago, and long before the full extent of the Texas freeze was revealed (see “Energy Trader: We’ve Officially Hit “Holy S*it Levels“), the extreme moves in natgas caught many energy and power companies offside, and Just Energy may well be the first causality of last week’s weather event. In the coming days, more energy firms could release statements about steep losses.

“We’ll have to see what kind of defaults come to the surface,” Again Capital’s John Kilduff said, and as of this moment we are waiting to see who else drowned in the “rogue wave.”