The GameStop Rebels Vs. “Too Big To Fail”

Last week, a large number of small-time investors drove up the price of GameStop’s (GME) stock a historic 1,784 percent. But this was no mere spike in some obscure stock. The stock’s price spiked in part as a result of efforts by “an army of smaller investors who have been rallying on Reddit and elsewhere online to support GameStop’s stock and beat back the professionals.” These professionals were hedge fund managers who had shorted GameStop’s stock. In other words, hedge funders were betting billions that GameStop’s stock would go down. But the price went up instead, meaning hedge funds like Melvin Capital (and Citron Research) took “a significant loss,” possibly totaling $70 billion.

There surely were plenty of insiders on both sides of this deal. Given the complexity of various schemes employed by seasoned investors, it seems it is very unlikely that this is just a simple matter of little Davids taking on Wall Street Goliaths. 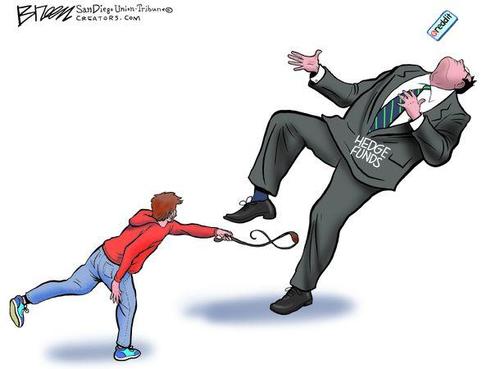 But that’s not what happened. Rather, it appears that, for many of the smaller investors who were involved, much of this “short squeeze” was conducted for the purposes of throwing a monkey wrench in the plans of Wall Street hedge funds which exist within the rarified world of billionaires and their friends.

The reactions to the event from media pundits and other commentators were telling in that there was clearly fear and outrage over the fact that business as usual on Wall Street wasn’t being enforced. Predictably, much of the reaction to the Reddit rebellion was to label it a “fiasco,” “insanity,” and something sure to leave a “trail of destruction.” The important thing was to use words designed to make it all look like the threat to hedge funds represents some sort of grave threat to the overall economy. Jim Lebenthal at CNBC, for example, declared the “short-squeeze fiasco is a threat to the proper functioning of financial markets.”

The fearmongering went beyond even the usual places we hear about financial news. On The View, for example, Meghan McCain delivered the sort of status quo–defending bromides we’ve come to expect from her. She insisted the GameStop affair could spiral into an economy-killing disaster because

If the stock ends up plunging because of this, because of GameStop and Wall Street loses billions, at a certain point, it will impact stocks like Apple and Disney and stocks that a lot of average Americans do invest in, and if that happens, average Americans will end up losing even more money.

Her comment doesn’t rally make any sense, and she doesn’t seem to have even a rudimentary understanding of what happened. But her comment delivered the important point: namely, that anything that causes volatility in the market could be a disaster for every American household. Translation: and we should all be very, very afraid if something isn’t done to keep these Reddit people—whom she compared to the Capitol “insurrectionists”—under control.

Of course, in a functioning and relatively unhampered market, unusual, unexpected things happen all the time. Entrepreneurial actors do things the incumbent firms and “experts” hadn’t counted on. This leads to “instability” and big swings in prices. This is actual capitalism, and it doesn’t mean the marketplace isn’t functioning properly. In fact, it probably means the marketplace is dynamic and responsive to consumers and other market participants.

But that’s not something Wall Street insiders or their pals in Washington like in the modern era. Although Wall Streeters love to portray themselves as capitalist captains of industry, the fact is they have very little interest in real, competitive capitalism.

Rather, we live in the era of “too big to fail” (TBTF), when market freedom means nothing and preserving the portfolios of powerful Wall Street institutions is what really matters.

Decades of “Too Big to Fail”

It’s based on the idea that Wall Street is just too important to the whole economy, and Washington must intervene to make sure rich guys on Wall Street stay rich. David Stockman explains this philosophy:

[It is] the notion that the “threat of systemic risk” and a cascading contagion of losses form the failure of any big Wall Street institution would be so calamitous that it warranted an exemption from free market discipline.

This goes back at least to the 1994 Mexican bailout—which was really a bailout of investors, not of Mexico—which solidified the process of normalizing huge transfers of wealth from taxpayers and dollar holders to the Wall Street elite. By then, the “Greenspan put” was already in place, with the central bank forever poised to embrace more easy money in pursuit of propping up stock prices. Then came the bailouts of 2008 and the covd-19 avalanche of easy money—all of which lopsidedly benefited Wall Street over the rest of the economy.

This “exemption from free market discipline” is what Wall Street is all about these days. The financial sector has become accustomed to enjoying bailouts, easy money, and the resulting financialization which puts ever greater amounts of the US economy into the hands of Wall Street money managers. The sector is now built on corporate welfare, not “free markets.” No matter what happens, Wall Street expects the deck to be stacked in its favor.

This is why “volatility” has become a bad word, and “stability” is now the name of the game. It’s why Lebenthal thinks anything out of the ordinary is a threat to the “proper functioning of financial markets.” If some free market innovation and inventiveness actually takes place in some small corner of the marketplace, well, then we’re all expected to get very upset.

Time for a Divorce