What have we learned so far in 2021? Simple: The relentless liquidity machine remains in full control. In addition to renewed and larger fiscal stimulus central bankers, including the Fed, have made it abundantly clear they will keep printing no matter what the data shows, no matter how much inflation there is (“let it run hot”). The Fed itself continues on its $120B per month QE program while the ECB has accelerated their program.

And while there’s been some angst around tech in response to rising yields and hyperextended small caps just recently dropped 11% the larger S&P 500 keeps chugging along and any threats of a trend break continues to be averted so far and indeed being saved yet again this week:

In short: Any tag of the 50MA or quick dip below is being bought and the upward trend continues unabated:

If you reduce markets to its simplest form and just assume that central bank printing and liquidity remains the overarching driver of everything and the Fed will, as it has stated, continue to print well into next year then perhaps the best analog to the current action is the ghost of 2013.

What was 2013 but anything other than a big Fed print operation? It was after all in December of 2012 when the Fed upped its QE3 program from $40B to $85B per month and markets did nothing but relentlessly drift higher with the occasional dip into the 50MA early in the year:

There were a couple of angst moments in 2013. One came on the heels of then Fed Chair Bernanke merely hinting at maybe tapering the QE3 program. Markets immediately dropped to the 100MA and Bernanke quickly dismissed the idea. One wonders why (facepalm). The other 2 corrective episodes came during the regular seasonal corrective periods in September and October. All 3 episodes ended at the 100MA and $SPX continued to make steady higher lows during each episode followed by higher highs and QE3 didn’t end until October 2014.

I’ve said since last year this all remains a matter of central bank control and reality is the current tape suggests central banks remain in full control despite the occasional hiccups in yields, the dollar and tech.

It is not until the above mentioned trend breaks that one can get a glimmering prospect of central banks losing control.

The message: Rips to new highs remain selling opportunities for 50MA/100MA reconnects, while these very same reconnects continue to offer buying opportunities unless the trend breaks. In that case of course all bets are off and the market could find itself rebalancing in a major way including filling a lot of, if not all, open gaps back to November: 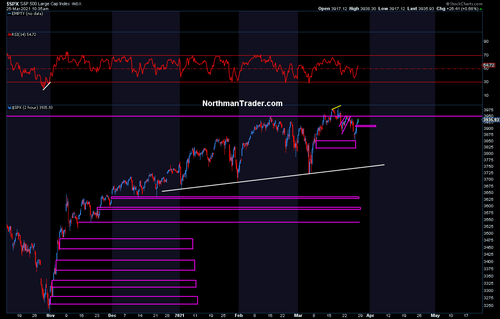 The largest correction in 2013 was brought about by Bernanke’s tapering comments. I suspect Jerome Powell will not subject himself to the embarrassment of a taper tantrum. Why even pretend and see markets drop. After all Jerome Powell has already learned his lesson in 2018 when he tried to maintain an “autopilot” stance on reducing the Fed’s balance sheet and rate hikes only to cower and completely reverse himself as soon market bombs were dropping all around him in Q4 2018. And so the Fed then, which currently states it will only raise rates once full employment is reached, instead cut rates three times in 2019 when unemployment was at 50 year lows of 3.5%. No, it’s never about the economy, that’s just the pretext. It’s about markets.

That was the lesson of the ghost of 2013 and it is the same now. Everything else is noise to be ignored. That is unless the trend breaks for then a whole heap of new ghosts would come scaring the bejesus out of everyone.