The Global Vaccine Race: When Will Your Country Be ‘Free’?

UK will soon reach a key threshold in the vaccination process, which will allow for a quicker than anticipated re-opening. The US will soon follow, while continental Europe will lag behind. We give our best guess on reopening dates in this analysis.

When will economies be allowed to reopen? When are we without restrictions? We take a look at the Israeli case and conclude that 35-37% of the population needs to be vaccinated before a major breakthrough is seen. The UK will soon hit this benchmark, while the US and efficient EU countries will reach this benchmark in early April. We will be without (most) restrictions sooner than you think. The UK will likely soon move towards a swift reopening, US will follow around Easter, while continental Europe will follow in early May.

Key take aways from the analysis

Israel has by far been the country leading the vaccine roll out and by the time of writing more than half of the population has received the first dose and a third the second dose. With the risk group and elderly almost completely vaccinated they have begun their reopening by the 21st of February where they also launched a Green Pass for vaccinated people. The Green Pass gives vaccinated fewer restrictions during the reopening, a strategy that without a doubt will attract criticism. 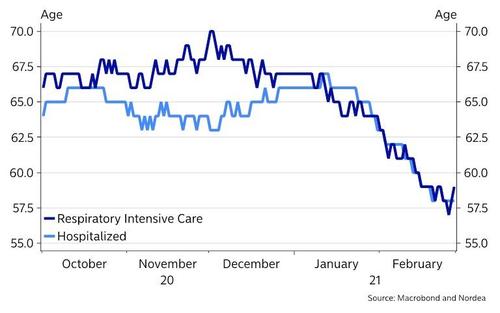 By the end of December Israel introduced a third lock-down as a result of a heavy rise in daily cases through the month. The transmission hit its peak by mid of January before dropping. Even though the vaccination roll out continued smoothly it took several weeks to constrain the virus due to the spread of the British mutation and a carelessness from the ultra-orthodox part of the society.

Our lead/lag studies from Israel suggest that around 35-37% of the population needs to be vaccinated (with at least one dose) before the final step towards reopening will be allowed. So let’s take a look at how close we are to such thresholds in other parts of the world. We will be without (too many) restrictions sooner than you think!

Chart 2. Relationship between daily cases and vaccination in Israel 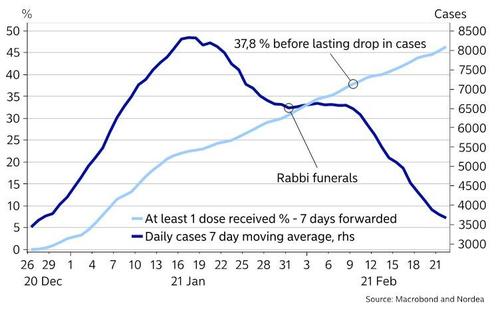 EU to lag UK and US in the re-opening phase

A lacking supply of vaccines and a sluggish efficiency in administering of said supply leaves the EU as a whole far behind its peers in the UK and the US. Swifter approvals of vaccines, smarter wordings of contracts with suppliers and more funding given to the R&D phase, leaves the UK and US clearly ahead of the EU on the supply front. The UK has also opted for a wide vaccination programme, ensuring a broad immunization before a full immunization of each individual. This has so far proven to be a winning strategy and e.g. Finland now follows roughly the same strategy. 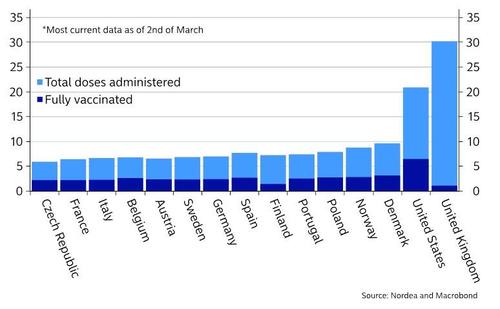 Our model accounts for the previous pace of delivery as well our expectations of future deliveries. In essence the model is built on an expected supply during 2021 and an increasing efficacy in the distribution. One of the key ingredients to a larger progression in the EU will be the addition of JnJ to the supply. EU holds a 300m dose contract with the firm and remember that JnJ provides “full protection” at only one dose. This significantly increases the vaccination progress. So that leaves the question: when? On February 16th, JnJ lodged an official submission for Conditional Marketing Authorization with the EMA, i.e. the rights to distribute its vaccine in the EU, in their press release they followed up with “We stand ready to begin distributing our vaccine within the European Union in the second quarter of 2021.” Our model shows that it is unlikely that the EU will catch up to the UK and US – they are simply too far ahead already and both have shown impressive gains to efficiency in their processes over the last two months. The EU countries have not.

The UK is already very close to reaching the 35-37% vaccination threshold, which will allow them to reopen faster than anticipated already towards the end of March and into the beginning of April. The most efficient countries in the EU (such as Denmark and other Nordic countries) will likely reach the threshold during the early stages of April, which will allow a broad reopening around Easter time, just a week or two later than the US. Most of continental Europe will though, on the other hand, likely not reach the tipping point (35-37%) until late April or early May, which will further delay the reopening in big countries such as Germany and France.

These re-opening dates are still BETTER than consensus expectations, as e.g. the global investor survey hints of a peak positive macro effect from reopening economies towards the end of the summer. It is also clearly a more upbeat scenario than most administrations hold across the globe, and we argue that most virologists are clearly too pessimistic by now. We see a “catch-up” effect in growth coming already in early Q2, which is before broad consensus expectations.

Chart 4. UK will reach the reopening vaccine threshold very soon, while efficient EU countries and US will be able to re-open a lot during early parts of April 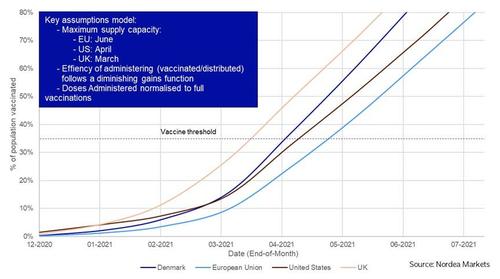 The UK has opted to vaccinate as broad a part of the population as quickly as possible by delaying the second dose up to 12 weeks, and currently, the most recent studies recommend this approach, as an analysis from Oxford, researchers find that the vaccine was 76% effective at preventing symptomatic illnesses up to three months after first dose. This means that we could essentially achieve substantial collective immunity towards the corona virus much faster, if the focus shifted. While Israel studies of their Pfizer regimen also shows that one dose of the Pfizer vaccine has an efficacy rate of 85%. With efficacy rates at these levels, we find it very likely that governments may start to adopt a one-dose regimen of some vaccines. Chart 5 shows the progress if we assume that governments adopt a one-dose regimen from April.

Chart 5. What if governments start administering one dose instead of two 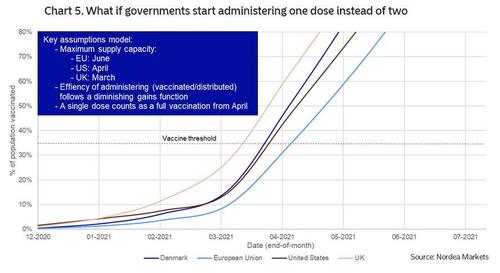 Finland has already moved towards this strategy, but we are yet to see a move towards it in other Nordic countries. Sooner or later, we expect the “prolonged 1-jab regime” to become the widely used model.