The Inflation Tax Is Lowering Our Standard Of Living

In a podcast, Peter Schiff said it smells like stagflation is on the horizon. Inflationary pressures are becoming more and more apparent. Labor costs, commodity prices and bond yields are all pushing upward – clear signs of inflationary pressure. And of course, defined correctly – as an increase in the money supply – there is no denying inflation is rampant. We saw a record increase in the money supply last year. The only time that even comes close was the stagflationary period of the 1970s. 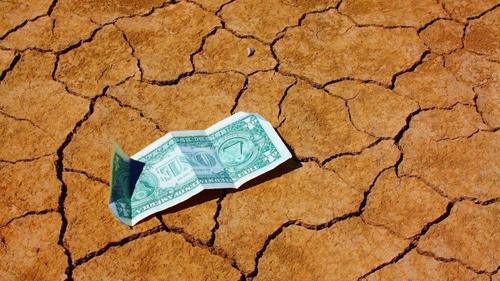 But what does this really mean for you and me?

As Peter explained during a talk for the Virtual Money Show, inflation is really a tax.  Economist Karl-Friedrich Israel recently broke down data that show how this form of taxation has impacted Germans in an article published by the Mises Wire.

Officially, German inflation has been tame. As measured by official government metrics, inflation has averaged about 1.5% per year. That’s below the “target” of 2% mainstream economists claim is good for the economy. Inflation reached its highest peak in 2008, coming in at 2.8%. Just one year later, it hit a low of only 0.2%. Last year saw a negative inflation print during certain months and it ended up 0.4% on the year.

Israel asks the pertinent question: do these figures provide a representative picture of the general price trends?

The answer is it’s actually hard to say.

Price inflation measurements are used to make subjective variables of economic life appear objective. How does the standard of living of citizens change? How much higher is real income today compared to twenty years ago? How much more expensive is a basket of goods of the same quality in one year compared to another? But just what equal quality even means in the course of technological progress and innovation cannot be determined objectively. Therefore, this question will never be answered conclusively.”

But Israel says there are “gaps” in the official measurement of price inflation that can be determined without subjective value judgments.

The European Central Bank uses the Harmonised Index of Consumer Prices (HICP) to measure inflation. Isreal describes it as “an index for current consumption.”

It therefore essentially focuses on consumer goods prices and systematically excludes the prices of capital goods and future goods. Using the HICP to assess the overall standard of living thus reduces citizens to mere consumers in the present. But they are more than that.”

American central bankers and policy-makers make the same error. They even refer to Americans as “consumers.” But we are not only consuming for the present. We are also savers and investors who plan for future consumption.

Quality of life is therefore determined not only by how much I can consume today, but also by how well I can provide for tomorrow. This is why price inflation for capital goods and assets is important. However, the HICP does not take it into account.”

It makes both present consumption and providing for the future more difficult. ‘Public goods,’ such as education, health, infrastructure, environmental protection, and law and order, that are financed by taxes in turn have an impact on the general standard of living. Here, too, the general trend in quality cannot be determined objectively. For some, the quality of public goods has declined; for others, it has not. What can be objectively determined here, however, is the monetary price that citizens have to pay for them. It can be quantified by the total tax burden.”

Taking these other factors into account, Israel has developed an alternative formula to calculate inflation that includes residential property, taxes and stocks (DAX). Unsurprisingly, it yields much higher inflation rates for Germany than the official numbers indicate.

The following table shows the average annual inflation rates of the individual components and of the calculated alternative index.

The alternative index has risen by an average of almost 1.1 percentage points faster than the HICP per year since 1999. This divide has increased over the past ten years with the advent of unconventional monetary policy. Since 2010, officially measured price inflation has been about 2.3 percentage points below the calculated alternative measure. What does this mean for an average household living primarily on labor income?” 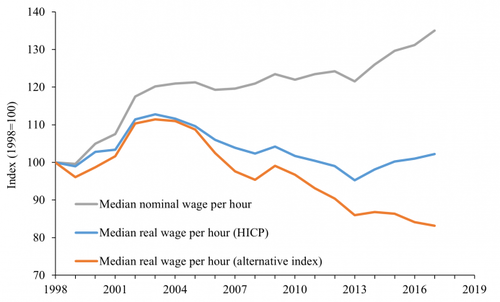 According to data from the Socio-Economic Panel of the German Institute for Economic Research, the median nominal gross wage per hour in Germany increased by 1.59% per year between 1999 and 2017. Using the government HICP number to calculate real wages yields positive wage growth, but only at a sobering rate of 0.12% per year. Even the official numbers reveal just how much inflation erodes our purchasing power. Using the alternative index makes puts things into an even sharper focus.

If we use the alternative inflation measure, real wages fell by 0.97% per year between 1999 and 2017. Between 2010 and 2017, the average annual growth rate of real wages was even –2.17%. This means that the median wage per hour in 2017 still had about 83% of the real purchasing power of the median wage in 1998. On average, people can buy less from their working wages when more than just the goods of everyday consumption are taken into account.”

Isreal explains how this impacts the lives of real people.

This result is due to disproportionate asset price inflation and a rising tax burden, which of course affect different households differently. Households that live almost exclusively on labor income and have no real assets, but try to build up real savings for the future, suffer from this development. Young families in particular, which cannot count on the material support of their parents’ and grandparents’ generation, are finding it more difficult to establish a comfortable economic existence. The anxiety and existential fears of the average German household, which one hears about more and more frequently, are not surprising in light of disproportionate asset price inflation. With a broader look at price inflation, it becomes clear that real labor income of the citizens has been devalued substantially beyond direct taxation. Households that cannot increase their income through capital gains are the first to suffer.”

This situation is certainly similar in the United States. The Fed’s inflationary monetary policy is taxing away our purchasing power over time, making it more difficult to save for the future and eroding our standard of living.

In Surprise To Markets, BOJ Buys Smallest Amount Of ETFs In Four Years