Reports say Donald Trump has lost it. Unable to face the reality that he will no longer be president soon, stung by public repudiations from the Supreme Court, Mitch McConnell, Vladimir Putin, Bill Barr, and other erstwhile pals, he is said to be canceling appearances left and right, retreating to a lonely schedule of golf and manic conspiracy theorizing on Twitter. He posted 550 times in just a few weeks of November, with three-fourths of that content, the New York Times for some reason calculated, made up of rants about a stolen election. 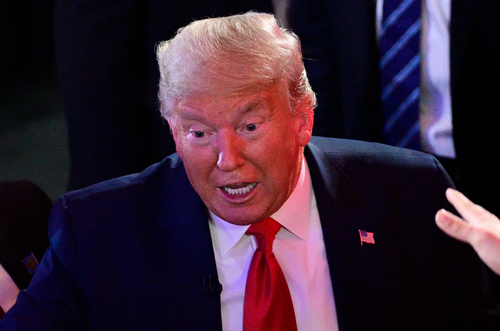 Unlike past presidents, who with the exception of Dick Nixon were all feted on the way out no matter what crooked or blood-soaked record they left behind, Trump is being ridden out on a rail. He exits politics as he entered it, as a human punchline, a ball of catnip to the commentariat, which gets to snicker now about his thinning schedule and “tiny desk” (the updated version of all those jokes about short fingers that drove him so crazy once). There is delight as “former close associates, longtime Trump observers, and mental health experts” whisper into the op-ed pages the cold final judgment that, as Politico put it, “Trump is a loser.”

Which is fine — victori sunt spoila and all that — but it’s already safe to say the Trump years will be remembered as a brutal black comedy that made winners and losers alike look very, very bad. It was supposed to be a historic, norms-smashing catastrophe, but the reality is that almost nothing actually happened during the Trump years, except for a very long, exhausting story. The major in-between change was a total loss of our collective grip on reality, beginning with the fact that most of the country thinks we just went to hell and back a thousand times, instead of making just one noisy trip in a circle, arriving just where we might have four years ago, if Joe Biden had run instead of Hillary Clinton. The tiniest conceivable step, but oh so much grief and self-deception to get there!

They’ll deny it, but huge portions of the snickering chatterati rooted for Trump at first. When he jumped in the 2016 race, cultural icons laughed, big-money Democrats cheered, and rubbernecking cosmopolitan media audiences clicked and tuned in by the millions. Except for the more favored Republican primary opponents who learned early on to look on Trump with genuine alarm, like a social disease persisting beyond the usual course of medication, most of upscale America thought the Trump Show was a hoot.

It was a happy event when he called into Morning Joe, like the old scripted radio bits where Rob Bartlett would call into Imus in the Morning as Bill Clinton or Don Corleone or Manuel Noriega, except here the voice pumping in one-liners over the phone to the guffawing straight-man cast was the real Donald Trump. Mika, Joe, and Willie yukked it up about Donald’s Latino friend who’d sorta learned English (“I wouldn’t say it’s Ernest Hemingway we’re dealing with,” Trump cracked) about the realness of Donald’s hair (“I tugged it once,” agreed Mika) and about how “it meant the world” to Lawrence O’Donnell when Trump was one of the first to reach out to him after he got his show back (“I like him,” O’Donnell said).

The Hillary Clinton campaign was even more enthralled. Bill Clinton, after all, had an encouraging chat with Trump just weeks before he entered the 2016 race, telling Trump he “was striking a chord with frustrated conservatives and was a rising force on the right,” as the Washington Post explained. The Clintons were preparing to run against Jeb Bush, who scared them because he had cash and an economic message that reportedly polled well with minority voters. The infamous Wikileaks-leaked memo about pied piper candidates showed the Clinton campaign was anxious to “elevate” Trump during the 2016 primary season, feeling they could use his lunatic act to defame the GOP against the inevitably more moderate “real” candidate down the line.

When it started to look like Trump had a shot at winning the Republican nomination, the Clinton campaign was so tickled it kept its mouth shut, so as not to jinx the situation. As Politico later reported:

Guidance was to hold fire on Trump during the primary and resist the urge to distribute any of the opposition research the Democrats were scrambling to amass against him. That hoarding plan remained in place deep into 2016 as some senior aides stayed convinced that a race against Trump would be a dream…

Democrats understood that Trump was an effective chaos agent, an iconoclastic shit-hurler who could bust apart the candidacies of people like Bush and Marco Rubio. They didn’t realize Trump was only just beginning an unprecedented assault on institutional America that would sweep them up as well, and that his greatest asset would be the consistent inability of upper-class America to take him seriously.

Omicron Wave Of COVID-19 Has Peaked In UK: Study

Playing into the Hands of the Real Terrorists Among Us

Is The US Shale Patch Refusing To Pump For Political Reasons?