I’ve been on vacation in Mexico for the past two weeks. But that isn’t the reason content from me has been scarcer than normal. Yes, vacations are supposed to be for recharging and taking a break from your routine.

But as I sat down to write this morning the overwhelming sense of futility washed over me. And nothing saps your will to work more than reading through the headlines and noting the complete lack of conscience on display by the media, our political leadership or frankly anyone with half a brain.

We live in a world today where the legislature of one of the most important states in the Union, Pennsylvania, released a report where more than 200,000 votes were counted than were actually cast. And no one in our media seems to think this is news.

Electoral irregularities are real and prevalent in Pennsylvania. Sadly, despite evidence, our Governor and State Department Secretary refuse to investigate.

Worse, most people in America can’t even be bothered to care about such things. And if you were to confront them with the evidence there must be some good reason why that ‘just can’t be true.’

The FBI, which couldn’t find any issues with Hunter Biden’s laptop for months nor ever do anything substantial with Anthony Weiner’s laptop in FOUR YEARS somehow solved the case of the Nashville bomber in less than 48 hours conclusively.

And that conclusion was the same as every other major terrorist event in this country’s recent history — a lone crackpot blew himself up to make a half-formed political statement. At least this time they had the good sense to vaguely tie the patsy to the political left versus turn him into a mouth-breathing MAGAtard with a Q-complex.

And somehow no one seems to care. Nor does anyone care about the lack of conclusion about the shooting in Las Vegas a few years back.

Notice the trend? Major stories that are supposed to matter are dropped the moment they get anything close to uncomfortable for those in power who are chosen to remain in power.

I’ve always thought Donald Trump’s biggest flaw was that he was an incurious man, but compared to the so-called journalists of our corporate media Trump is the second coming of Sherlock Holmes for pity’s sake.

There are voter irregularities of a type and kind which demand real coverage, even if it turns out to be easy to cast doubt on them. And yet, after haranguing Americans TO CARE about voter fraud in places like Belarus, Crimea, Venezuela, Iran, Serbia, Georgia we’re supposed to swallow the lie this was the ‘most secure election in this country’s history’ without even a bottle of ketchup?

No matter where you are on the political spectrum, nor who your Twitter spirit guide is, all of these things should disturb you.

And yet, it doesn’t seem to. It is not CNN’s nor Fox’s decision to not report on them because they don’t want to engage in searching out the truth.

The hearings in the Georgia State Senate going on as I write this are hair-raising, painting a picture of corruption so detailed you’d think it was a Mandelbrot set.

JUST IN – Fulton county voting machines at a poll location are connected to WIFI both transmitting & receiving data **right now** according to a witness report at the #Georgia‘s Senate Judiciary Subcommittee hearing.

Every rabbit hole you go down forks into a deeper one, revealing even more information about how truly corrupt and inhuman our political systems are and yet our media stands there like a thousand monkeys banging away on their iPhone keyboards trying to convince us what they are producing is Shakespeare and not auto-corrected Engrish. 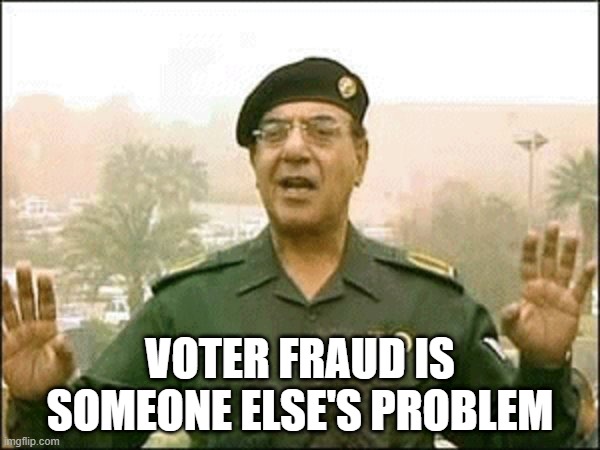 If we’ve reached this level of whitewashing of the news and the truth to this point, I’m having to wonder why it is North Korea is so hated? I’m at a loss to come up with anything more accurate than competitive envy at fiction writing.

Hundreds of millions of people’s lives are being actively destroyed by overzealous governors and heads of state issuing draconian lockdown orders over a virus with multiple vaccines that are less effective than our own immune systems. A compromised WHO and CDC issue conflicting recommendations weekly and Dr. Mengele Fauci openly admits to lying to us.

They all do this without any sense of shame, shedding crocodile tears so unconvincing they could be runner-ups at a Miss America pageant. But we’re supposed to think we’re saved because Congress decided to give us a $600 advance to pay our 2020 income taxes with?

And I haven’t even scratched the surface here. We know why they are doing this — to support to open hostile takeover of what’s left of private capital markets and property in support of the World Economic Forum’s Great Reset.

Yet here I sit watching otherwise reasonable and naturally skeptical people still live within their normalcy bias to refuse the obvious propaganda and blame the victims.

It can’t be this bad right? No conspiracy can be this big? There was fraud but it’s trivial. Y’all are just sore losers and Trump really did lose his base because of his horrific foreign policy. I swear I’ve never been sadder to call myself a libertarian than I am right now.

That is nothing but rationalization to evade the reality of what has happened and what will happen. Because the sad truth is that no matter who you are when confronted with monstrous evil most people’s first reaction is to reject it.

And they do this not because they don’t believe people are capable of it.

No, we reject evil of this magnitude because in order for us to maintain our sense of self-image as rational, caring people admitting its reality implies a responsibility to do something about it.

And stopping evil takes away from “me time.”

The same operation has been done with COVID-19, any and all data associated with it, the death statistics, the miraculous immunity to influenza Americans now seem to have, etc. 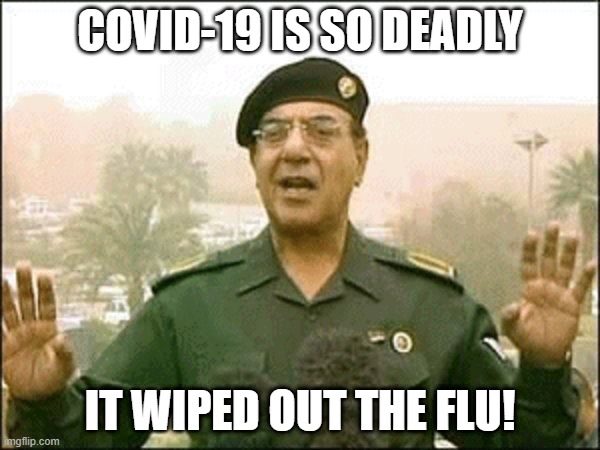 And if we are going to just sit back, mask up, accept the $600, put our heads down and “believe all talking heads” then what’s the point in pointing out the hypocrisy of it all?

The new Super-COVID is here and it’s time to believe it all again.

Isn’t that the real lesson of 2020? Don’t fight the crazy just cling to the delusion that a mask isn’t a muzzle, guns can’t protect you and we still live in a society with something approximating rules.

Isn’t that what all of this irreality is for, to desensitize us to their outrageousness? To normalize their grotesquerie? I mean, really, does anyone honestly believe any single word that comes out of Nancy Pelosi’s mouth?

I didn’t think they made masks big enough to contain the Pinocchio nose she has to have at this point. Maybe she’s had to have so much plastic surgery to contain it that it collapsed like Michael Jackson’s and it’s actually now just negative space.

It would almost be okay going along with all of this nonsense if they were in any way artful about it. If I could, at the very least, appreciate the craft, you know, as a writer and an artist then it would make the double whiskies go down a little easier.

I could almost stomach it if they even put in the least little effort to convince me through something approximating a good performance. I gave up on them trying to convince me with argument ages ago. But a little sincerity to go with the virtue signaling would make the game worth playing.

But they can’t even give us that anymore. That’s how much contempt they have for us.

And it’s easy for them to have that contempt because, frankly, that’s how much contempt we must have for ourselves to go along this perfunctorily towards their dystopia.

I’ll be here even though, at times, it feels futile. Because it is just that, a feeling. And feelings are as ephemeral and temporary as Anderson Cooper’s dalliances with the truth.

Which, I guess, is as good a lesson to absorb from 2020 as anything else.

The post The Lesson of 2020: What’s the Point of Pointing Out the Hypocrisy? appeared first on LewRockwell.