By Viktor Shvets of Macquarie,

Following the Georgia run-off, US 5Y/5Y break-even rates have firmed above the psychologically important 2% cut-off, as investors have started to accept a more robust shift towards fiscal stimuli and, hence, potentially higher inflation. As discussed (here and here), we do not view the US election as signalling an electoral shift to the left. On the contrary, it highlighted rising polarization, not consensus, transforming a ‘blue wave’ into something akin to a far more moderate ‘ripple’. Similarly, while no one globally practices austerity, there is equally no desire yet to embark on a permanent expansion of fiscal spending; instead, as we recover from COVID, it is likely that G5 fiscal deficits will be pulled back by ~US$3 trillion over ‘21-22, leaving CBs to balance vols and risks.

However, this does not mean that there will be no inflation. Inflation can be caused by underlying economic recoveries, fiscal and monetary policies, and capacity constraints. By now, most investors accept that aggressive use of monetary levers generates disinflation, not inflation (i.e. money printing is not equal to inflation), and most investors also accept that technology and financialization are highly disinflationary.

This leaves two sources of any meaningful inflationary pulse:

While we have been arguing that MMT-style policies are the future, we do not believe that, politically or socially, the time for MMT has arrived yet, requiring either further dislocations, five- to ten-year demographic transitions or a mix of the two. This leaves base effect and greater capacity constraints as key inflationary drivers.

There is no doubt that, mathematically, headline CPI (to a lesser extent, core), will record a significant move into 2H’21. Assuming our energy team is correct and oil prices remain at ~$55/barrel and CRB indices do not significantly exceed 180-200, then G5 (i.e. US, UK, Eurozone, Japan and China) headline CPI could mathematically rise towards 3% plus from 0.5% today, but then inflation is likely to recede to ~2% by early 2022. 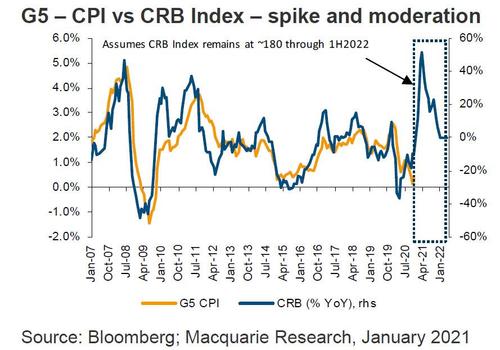 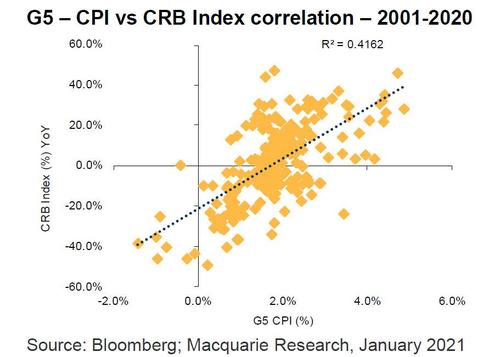 Beyond that point, it will be fiscal policies and constraints that will determine inflationary trajectory. We maintain that fiscal policies will be haphazard and reliance on monetary levers will remain the key, while capacity/input limitations will ease through declining commodity intensity and low cost of capital and technology. As a result, we expect less disinflation rather than a systemic and persistent rise in inflation. 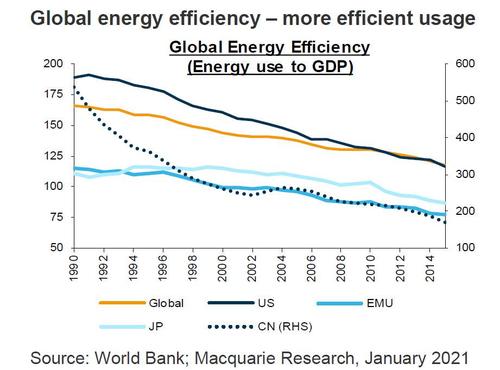 What does it mean for investors?

We continue to believe that the ‘boundaries’ between sectors and styles are becoming less relevant (i.e. staples are no longer staples, discretionaries are no longer what they used to be, and no one knows anymore what the communications index means). There is also confusion as to what is actually meant by growth, value or quality. Our approach has been to create portfolios that highlight stocks that either play into secular LT themes or corporates that use technology, data and intangibles better (QSG).

It is not about social media or tech per se, but rather how one uses them. While themes like alternative energy (EV, etc.) or robotics might be viewed as being in a bubble and might correct, new ways of manufacturing and distributing while reducing waste are the future, which will deliver excess returns and lower inflation. 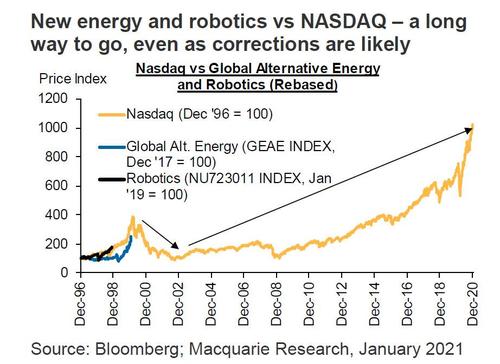 Pubs In England Will Sell 13 Million Pints During The Euros Final, Despite “Disappointing” COVID Restrictions

Off-Exchange Trading Surges To Records Thanks To Reddit Retail Rebellion