Authored by Julie Kelly via American Greatness (emphasis ours),

In a quiet but stunning correction, the New York Times backed away from its original report that Capitol Police Officer Brian Sicknick was killed by a Trump supporter wielding a fire extinguisher during the January 6 melee at the Capitol building. Shortly after American Greatness published my column Friday that showed how the Times gradually was backpedaling on its January 8 bombshell, the paper posted this caveat:

The paper continued to revise its story within the body of the original January 8 story: “Law enforcement officials initially said Mr. Sicknick was struck with a fire extinguisher, but weeks later, police sources and investigators were at odds over whether he was hit. Medical experts have said he did not die of blunt force trauma, according to one law enforcement official.” 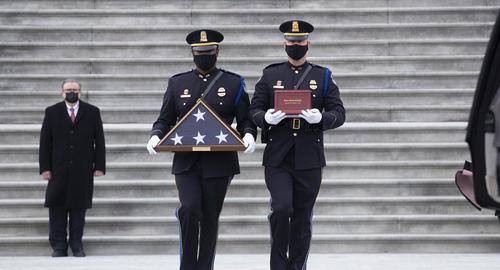 What’s missing, however, is how the Times first described what happened to Sicknick.

“Mr. Sicknick, 42, an officer for the Capitol Police, died on Thursday from brain injuries he sustained after Trump loyalists who overtook the complex struck him in the head with a fire extinguisher, according to two law enforcement officials.”

The account of Sicknick’s death was reported as fact, not speculation or rumor. Further, it appears that the anonymous sources were not law enforcement officials but people “close” to the police department—which means they could have been anyone from House Speaker Nancy Pelosi (D-Calif.) to inveterate liar U.S. Representative Adam Schiff (D-Calif.) to the Democratic mayor of Washington, D.C., Muriel Bowser.

Not only was the Times’ untrue story about Sicknick’s death accepted as fact by every news media organization from the Wall Street Journal to the Washington Post, political pundits on the NeverTrump Right also regurgitated the narrative that Sicknick was “murdered” as did lawmakers on both sides of the aisle.

In an outrageous effort to create more favorable optics before the impeachment trial, House Democrats honored Sicknick in a rare memorial at the Capitol Rotunda on February 3. Joe Biden, in a statement issued after Donald Trump was acquitted Saturday afternoon, repeated the lie about Sicknick. “It was nearly two weeks ago that Jill and I paid our respects to Capitol Police officer Brian Sicknick, who laid in honor in the Rotunda after losing his life protecting the Capitol from a riotous, violent mob on January 6, 2021.”

The Times’ correction might be one reason why Democrats on Saturday reversed their demand to subpoena witnesses. House impeachment managers cited the original January 8 Times’ article as evidence in their impeachment memo: “The insurrectionists killed a Capitol Police officer by striking him in the head with a fire extinguisher.”

Any arrangement to compel testimony would have provided Trump’s legal team with an opportunity to expose yet another myth in the Democrats’ “incitement” case against the former president.

Now that the Times has essentially retracted its explosive article, will other news organizations, pundits, and lawmakers follow suit? Unfortunately, like so many media-manufactured stories about Donald Trump and his supporters, millions of Americans already believe the Sicknick story as truth; even a Times’ correction won’t change their minds.

The truth in all matters related to Donald Trump is only of secondary concern, if at all. And once again, reporters who egregiously exploited a man’s untimely death to score political points against a man they revile won’t be held accountable. Another hoax down the memory hole.

Whitehead: All The Ways In Which Our Rights Have Been Usurped