The Next Melvin? Maplelane Loses 33% On Shorts This Month, Steve Cohen Down 15%

Yesterday, in the aftermath of the spectacular collapse of Melvin Capital which only exists because Citadel’s Ken Griffin and Point72’s SAC’s Steve Cohen gave it $2.75BN to pay for a margin call, we speculated that the option heavy, short-focused Maplelane Capital (established in 2010 by a former PM at the disgraced tech-focused hedge fund Galleon) and was full to the gills with puts on names that had exploded in recent days, could be the next major hedge fund to blow up. 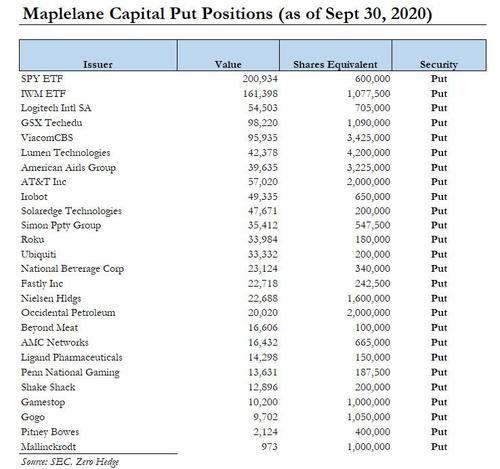 Today, Bloomberg read our article and reported that – as we expected – “Maplelane Capital, a $3.5 billion stock hedge fund, lost about 33% this month through Tuesday in part because of a short position on GameStop Corp., according to investors.”

While we didn’t know the exact number, it’s clear that it would be bad.

What follows is speculation that despite the massive loss, “the firm significantly altered its portfolio in recent weeks, adjusting risk, one of the people said, asking not to be identified because the information isn’t public. Those changes helped protect against further losses, and the firm has no liquidity or margin issues.”

Right… a 33% drop and no liquidity or margin issues, is their Prime Broker the Federal Reserve, or god?.

And even if that is right, we can’t wait to see the inbound redemption request faxes from delighted LPs who just lost a third of their capital which should assure that this particular hedge fund does not reincarnate a third time.

Meanwhile, reporting something we did not know but certainly speculated, Bloomberg also said that Steve Cohen’s $19 billion Point72 Asset Management “lost 10% to 15% so far this month as a growing number of hedge funds tally losses from retail investors’ attacks on popular positions.” And this after Cohen plowed $750MM in Melvin Capital to make sure that his previous investment in his former employee, Gabe Plotkin, wasn’t wiped.

Cohen’s loss underscores the potential for pain to spread after investors using chat rooms and social media set out to target some hedge fund bets. Point72 already had about $1 billion at Melvin, which as of Tuesday had lost more than 30% so far this year.

Yes: one of the most legendary hedge funds on Wall Street, the firm that was the inspiration for “Billions”, lost almost a sixth of its value because of a unprecedented raid by a ragtag band of teenage “autists” who showed the world just how much power and how much damage countless DDOS-type attacks on a handful of hedge funds by millions of individual investors all armed with stimmy checks – who are irrelevant alone but so powerful combined – can do.

So much damage, in fact, that the powers that be found it necessary to first shut down the discord server, and then give them a permanent time out because one more hedge funds – perhaps Steve Cohen himself – complained.

And just like that wallstreetbets has a new enemy pic.twitter.com/WngCRuS67k

And then there’s this:

Matt Gaetz: Trump Is Not Resigning and Not Leaving the Public Stage – He Remains the Inspirational Leader of a Loving and Patriotic Movement (VIDEO)