Bringing together the US emergency bank lending crisis and the now massive Covid response, I’ve concluded that one of the main reasons it is happening, apart from the corporate looting, is because of a historic event, the USA’s economic collapse and the dollar’s demise, which started just weeks before this Covid operation kicked off, and has been put on hold by a world wide manufactured economic ‘freeze’.

THE END OF ‘EXTEND AND PRETEND’

A few months before Covid appeared, the Fed were busy pouring literally trillions of dollars into the US banks, to prevent inter-lending bank-runs which were starting to develop. These were the same tectonic fissures that developed prior to the 2008 crisis, where the banks became so distrustful of each other’s solvency, that they massively increased interest rates to each other to factor in the risk. If unsuppressed the lending rates would continue to rise, laying a path to bank failures and a contagion which would eventually derail the economy and undermine the dollar itself.

In September 2019 the Fed intervened in the repo. markets for four consecutive days, pumping $75 billion per day into the banks, as the inter-banking interest rate – the repo rate – peaked at a terrifying 10% [1]. If this level were allowed to contaminate regular highstreet lending, it would cause widespread debt defaults & insolvencies.

The dangers are far greater today because, unlike in 2008, Quantitive Easing (QE) has pushed the Fed to the limits of its credibility, and are forcing them into causing some serious currency debasement. If they continue with the forms of QE they are shackled to, then dollar debasement becomes a certainty in a US economy that is far more fragile & indebted generally and less able to cope.

The Fed must have known for a few years that QE was not returning the economy to economic normality, and that they were still trapped in the solvency crisis of 2008. Knowing this, the Fed were prepared for the latest crisis. They had made it possible to inject hundreds of billions of dollars into the banking system discreetly, unlike in 2008, without any additional Congressional fanfare, via the Financial Stability Oversight Council, formed in 2010.

They had given themselves almost unlimited funds and the resources of the entire government if necessary, to reassure the banks that collapse was impossible. This ‘rescue operation’ was being played out, relatively unreported except in the financial press, only weeks prior to the Covid flu appearing on the world stage. Issuing…

….. cumulative repo loans totalling more than $9 trillion to the trading houses on Wall Street that the Fed had been making from September 17 of 2019 – months before the onset of COVID-19 anywhere in the world…[2]

Unlike in 2008, this second use or continued use of mass Fed stimulus is not a new untested idea and, by using it again or continuing to use it more intensely to stabilise the banks, it would eventually lead the markets to conclude that we are locked in a never ending cycle of stimulus, which will inevitably end in hyperinflation and dollar collapse.

That is an uncontroversial economic fact, and will be the conclusion of the Fed’s current policy. In that context, an external ‘event’ could be critical in taking the spotlight off US finance and its woes.

The Fed will not want to exit repo operations until they are absolutely certain the market can stand on its own two feet.[3], [4]

United States Overnight Repo Rate was at 0.11 on Friday January 15 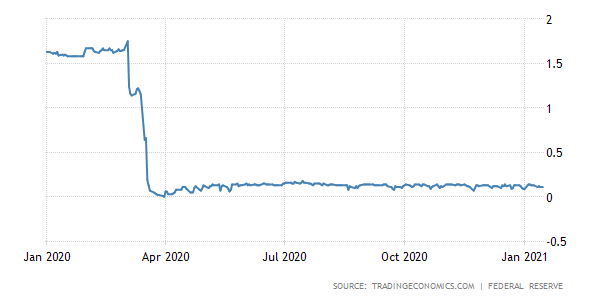 But, as they well know given their experience over the past 10 years, the markets will never be able to stand on their own feet in the current economic model. Now not only companies are being kept afloat by low interests rates, the US itself is dependent and kept solvent by low interest rates.

The fed has injected or made available over 9 trillion dollars to the banks in only 6 months leading up to March 2020, that is over 40% of the USA’s GDP, prior to Covid and represents nearly a 40% increase in the USA’s national debt!

So it is becoming very obvious that we are at the end of this particular monetary road, the ‘extend and pretend’ policy is finished and there is nothing in the economic tool box that can stall the inevitable. Only an external ‘divine’ intervention could, even temporarily delay the dollar’s collapse. As an aside, I should add, although they may be affected later, this is not happening in European or Asian banks, only in US banks.

The post The Old Lady Who Swallowed a Fly appeared first on LewRockwell.

Buchanan On Biden’s America: One Nation Or Us Versus Them?