Authored by Michael Snyder via The End of The American Dream blog,

Over the past year we have seen a mass exodus from major cities along the west coast, but what is happening to San Francisco is particularly sad.  Once upon a time, San Francisco was one of the most beautiful cities on the entire planet.  There is so much culture there, and the rolling hills make it a place like no other.  And thanks to the tech boom in Silicon Valley, it has become one of the most prosperous cities in the whole country.  So why have hordes of San Francisco residents decided to leave and never look back? 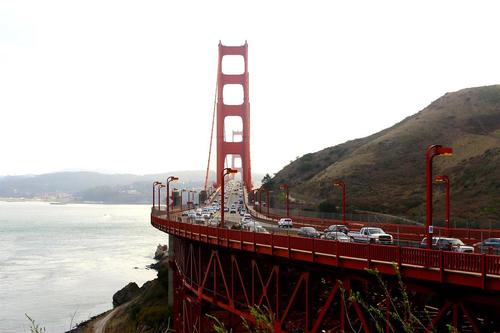 Well, there are a lot of factors at work.

First of all, the cost of living has gotten wildly out of control.  A postage stamp of an apartment will cost you thousands of dollars per month to rent, and a lot of people don’t like paying 17 dollars for a salad.

For others, the extremely high taxes and the insane politicians are more than enough of a reason to leave the state.  The lockdowns that were instituted by Governor Gavin Newsom have destroyed thousands of small businesses, and many former small business owners have pledged that they will never go back to California under any circumstances.

In San Francisco in particular, open drug abuse in the streets has made headlines all over the globe in recent years.  The streets are constantly littered with drug needles and piles of human feces, and that isn’t pleasant.

On top of everything else, there is always the threat of more wildfires and a giant earthquake could strike the coast at literally any moment.

But none of those things are what this article is about.

This article is about the huge spike in crime that is driving countless people away from San Francisco.

When he was able to get a job with a tech company four years ago, Kieran Blubaugh jumped at the chance to live in San Francisco, and at first everything seemed great…

Kieran Blubaugh dreamed of living in California when he was growing up in Indiana. He played the Tony Hawk Pro Skater video game and envisioned himself skateboarding down San Francisco’s crazy hills.

After paying off his student loans four years ago, he landed a job with a tech company and moved to San Francisco. At first, life was heavenly. He had a seven-minute commute on his motorcycle. He could pay $30 to see Incubus, one of his favorite bands, a short walk from his apartment.

Unfortunately, his infatuation with the region did not last long.

Even though he was located in a good part of the city, crime just kept getting worse and worse, and eventually he decided that enough was enough…

Soon, however, his California dream soured. Thieves broke into his locked garage and did $8,000 worth of damage to his motorcycle, doubling his insurance rates. His dog nearly died after eating human feces on the sidewalk. Seeing people either getting arrested or being treated for an overdose outside a nearby building was a regular occurrence.

With each passing year, the criminals just keep becoming even more brazen.

Not too long ago, San Francisco resident Ben Couillard had someone watch his house while he was away, and that individual actually had to confront someone that was trying to break into the house…

He said the house sitter came face-to-face with the suspicious person who had turned his attention away from the vehicles and to the house.

“So she saw him through the window and basically when she asked him, you know, ‘Can I help you?’ Like, what are you doing as he’s trying to break in? And he said to her, like, ‘Go upstairs, (expletive) or I’ll kill you.”

What would you do if that happened to you?

You could call the San Francisco police, and they may or may not show up eventually.

Meanwhile, the junkies will continue to roam throughout your neighborhood as they search for things to steal so that they can sell them for more drugs.

The other night, San Francisco officials held a “virtual town hall” to discuss the crime wave.  Residents were told that criminals are starting to target residents more frequently because they don’t have many tourists to prey upon these days…

San Francisco Supervisor Hillary Ronen, District Attorney Chesa Boudin, and the captain of the police department overseeing the area, held a virtual town hall with residents of the community Wednesday night to address their concerns.

They attribute what they say is an increase in crime to “economic desperation” and “tourism has gone down so substantially in San Francisco that criminal rings that targeted tourists in areas that tourists frequent no longer have tourists there,” said Supervisor Ronen.

Please remind me not to visit San Francisco as a tourist any time soon.

Sadly, we are seeing the exact same thing happen to San Francisco that has happened to countless other communities all across the nation.  Like so many other major cities, it has become a crime-ridden, drug-infested hellhole, and this has happened even though northern California is swimming in hundreds of billions of dollars from the tech industry.

After telling a reporter why he left the state, Kieran Blubaugh was asked how conditions in the state could be improved.  This was his answer…

The “defund the police” movement has been pushing California cities such as San Francisco to greatly reduce police funding, but Blubaugh insists that the solution is more police.

And Blubaugh is not exactly an elderly curmudgeon.  In fact, he is just 33 years old.

Of course the phrase “general lawlessness” could be used to describe the condition of the United States as a whole.  We have become an upside down society where good is evil and evil is good, and as a result we have totally lost our way.

Unless we completely reverse course, the “general lawlessness” in our country is only going to intensify in the years ahead.

But we aren’t going to reverse course, are we?

At this point, we appear to have a national love affair with evil, and the consequences of that love affair are going to be very bitter indeed.

“Programmable Digital Currency”: The next stage of the new normal?