by Michael Every of Rabobank

So John (and Jack2343 and Jane1928273) went long, and silver went up, and physical silver split from paper – because if you are going to nail yourself to a cross of precious metal then do it properly, right? 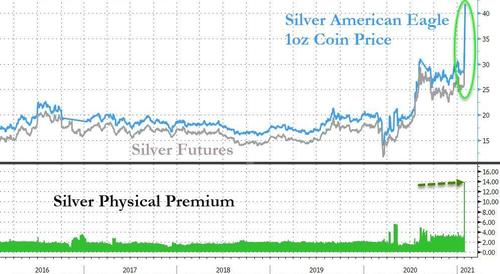 At least it made a change from the social media meme of Fry from Futurama holding out (paper) money and saying: “Shut up and tell me which stocks to buy to punish rich people.” And did we achieve a global reflation as a result?

Ironically, Bloomberg crows that, yes, reflation trades are indeed back on, with the US Treasuries 5s-30s spread widening out to 143bp on Monday, the widest since 2016. All I can say is that those buying that particular market trend are like Fry from Futurama holding out (newly printed central-bank paper) money and saying: “Shut up and tell me which commodities to buy to punish poor people.”

What we see all round us is global billionaire after billionaire getting more billionaire-y, and their pet projects to match: overnight Hollywood genius, galactic explorer – how long until one decides to turn the moon into cheese? Hedge funds would buy it; and if it were shorted by them then Redditors would, so cheesy moons are surely a win-win. Or how about just wiring up a monkey brain to play video games? But rather than gargling such central-bank bong water, let’s recall markets are allegedly trading for The Great Reflation, and not The Great Gatsby, because we are going to see joined up fiscal and monetary policy.

Now this would be a real game-changer. Really. Except it isn’t happening.

On the central-bank side, rates will stay at zero or below (or perhaps even lower in Europe?) for as far as the eye can see. But there is no change there from a few months ago. If anything, at the margin rate cut bets are being wound back outside Europe. Likewise, QE is going to continue for a long, long time. But that has sat alongside zombification and financialisation and immiseration, not inflation, for years and years. Importantly, despite central banks, developed and emerging, having printed enough money to cover the enormous fiscal deficits run in 2020, none will admit they did this and that they are happy to play that new role going forwards. They do not publicly accept that they will be returning to the subordinated monetary policy position they held from post-WW2 to the late 1970s or early 1980s so successfully to middle-class growth; and in Europe and Japan from the mid-19th century until 1914, so successfully to middle-class growth; and in China today, so successfully to middle-class growth. With a track record like that, one can understand why! Yes, there is talk about the climate challenge, and equality. Yet have we seen a ‘we just printed our way through Covid so let’s do some more!’ moment? We have not. Central bankers are clinging to their independent sage-like status; and the 1980’s-era political model of targeting inflation (meaning wages and not asset prices) that has seen just a slice of the middle class accelerate upwards in wealth, and the rest crushed, while a select few gaze up at the moon and say “I bet I could turn THAT into cheese.”

More pertinent for markets trying to show that they aren’t “Snake-oil? I will take two!” Redditors is that even if central banks were secretly prepared to go back to their secondary position of helping to finance industrial policy (with all the adversarial geopolitics that comes with it, by the way!) we still see no sign whatsoever of governments stepping up to the plate fiscally. Read the newspaper. It’s not hard to do:

If you wanted to see fiscal-monetary policy coordination, governments would say they are going to allow the economy to “run hot” in the same way central banks uselessly pledge to. BUT THEY AREN’T. They are talking about tax hikes and spending cuts alongside the therefore meaningless mantra of “Build Back Better”. And central banks would cap yields anyway so steepening couldn’t happen.

If one does want to see a go-for-growth budget, look at India – and hurrah for that. (Yet note that in the best traditions of industrial policy, the gains are being ring-fenced internally, the same way that China plans to with “dual circulation”.) But what’s this? Long Indian yields jumped 13bp on the view that the central bank won’t be helping too much with the near-record borrowing to be done. So yet again, no magical fiscal-monetary policy fusion to keep yields low and growth high.

So is the US Treasury curve now trading on the back of Indian stimulus? Or are the ‘Frys’ who don’t read the paper, can’t understand how Covid-19 has changed society and the economy, and who won’t read any 1920’s history before shouting out “Roaring!”, simply get confused by low H1 2020 inflation base effects, commodity prices as a new asset class to speculate on (while wages stay flat), and the simplest of spin from governments? I leave you all to decide. The band might be warming up for a fiscal-monetary jam: but I would strongly suspect what we have are needless preparations for things being on fire when they are still quite cold in all the key areas. Or, ‘The Red Hot Chilly Preppers’. Call me when they play “Give it away now”

BREAKING: FBI Claims Jurisdiction and Yesterday Took Control of Shredded Ballots Being Analyzed in Georgia – Sends Them Back to Shredder