The Stimulus Package Won’t Cut Poverty, It Will Accelerate It

The United States Senate narrowly voted in favor of the American Rescue Package over the weekend. The $1.9 trillion stimulus package is being presented as a savior for the citizens still suffering from the COVID-induced economic crisis, but the actual impact of the package is likely to be a net negative.

Before we get started, here is a quick overview of where the $1.9 trillion is reportedly going:

There is plenty more in the $1.9 trillion stimulus package but you get the idea. The new administration is being heralded as the savior of the low and middle class. It is being praised for sending minimal amounts of money to small businesses (less than $50 billion for restaurants, venues, and other small businesses). We, the American people, are even being told that the government has cut poverty!

No, seriously. The Washington Post published an article over the weekend titled “Biden stimulus showers money on Americans, sharply cutting poverty and favoring individuals over business.” How these journalists know that the stimulus package, which hasn’t even been implemented yet, has cut poverty is confusing to me. They must be able to see into the future.

Obviously, no one can see into the future. No one knows exactly the impact of this stimulus package. Some people claim it will help the people who need it most. Others believe it will lead to higher levels of inflation, which disproportionately hurt the lowest socioeconomic classes.

One thing we should all be able to agree on is that the Washington Post headline is pure propaganda. These journalists have become a mouthpiece for the state. Showering money on Americans. Sharply cutting poverty. It sounds like a third-world dictator wrote these headlines in an attempt to tell their citizens that everything is going to be alright.

The truth is that the new stimulus package drastically reduces the number of people who are eligible to receive stimulus checks. The cap used to be anyone who made up to $100,000 but that has been cut by 20% down to $80,000. The unemployment insurance boost was originally $600, but it got cut down to $300 in the extension at the end of 2020. The Biden administration proposed a $400 per week extension, but that was cut by 25% in the last few hours leading up to the Senate vote.

So if one hyperbolic headline includes showering money and cutting poverty, the other extreme could read “Biden Stimulus Withholds Money From Those In Need To Bail Out Failing Local Governments and States.” Wait, what? Think about this — the stimulus package includes $360 billion in relief for state, local, and territorial governments. That is almost 20% of the entire allocation of capital in this measure.

While $360 billion may sound small, the total cost of the stimulus checks would be $245 billion if we gave a $1,400 stimulus check to each of the 175 million who make less than $75,000 a year. Add in $300 unemployment insurance per week for the 10 million Americans who are out of work and you could fund the $3 billion of unemployment insurance for almost 10 months before you had given more money to the people, rather than to local and state governments.

So for those keeping track at home, the government gave more money to bail out poorly run local and state governments that shut down their economies than they gave the actual citizens that everyone is claiming they are helping.

Sounds a lot like they are showering money on the government, rather than the people.

Now on the topic of cutting poverty, there is no denying that the personal savings rate and the income rate have exploded during the pandemic. In hindsight, we made everyone sit at home and then handed them money. There wasn’t much for them to do with that money other than save it. 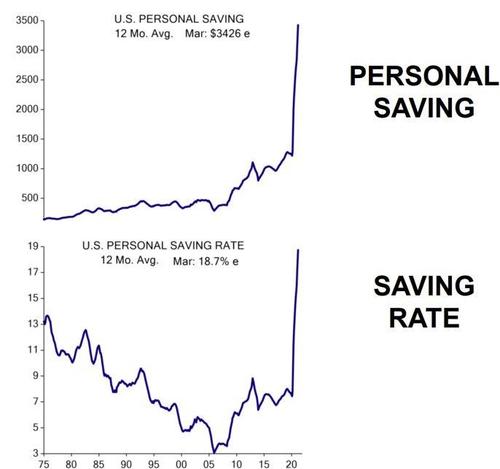 But these statistics suggest that everyone is making more money and everyone is wealthier post-pandemic. This isn’t how we should interpret the data though. Take this excerpt from the New York Times in September 2020 that analyzed previous data:

American families shored up their savings substantially between 2016 and 2019, according to Federal Reserve data released on Monday, but wealth inequality remained stubbornly high — and that was before the coronavirus pandemic took hold.

Median net worth climbed by 18 percent in those three years, the Fed’s Survey of Consumer Finances showed, as median family income increased by 5 percent. The survey, which began in 1989, is released every three years and is the gold standard in data about the financial circumstances of households. It offers the most up-to-date and comprehensive snapshot of everything from savings to stock ownership across demographic groups.

The figures tell a story of improving personal finances fueled by income gains and rising home prices, the legacy of the longest U.S. economic expansion on record, one that had pushed the unemployment rate to a half-century low and bolstered wages for those earning the least. Yet many Americans had less in savings than they did before the last recession a decade ago and yawning gaps persisted — the share of wealth owned by the top 1 percent of households was still near a three-decade high.

Nearly all of the data in the 2019 survey were collected before the onset of the coronavirus. Economists worry that progress for disadvantaged workers has probably reversed in recent months as the pandemic-related shutdowns threw millions of people out of work. The crisis has especially cost minority and less-educated employees, who are more likely to work in high-interaction jobs at restaurants, hotels and entertainment venues. Inequality appears to be poised to widen as lower earners fare the worst.

Employment remains sharply depressed compared with before the pandemic, leaving many households in a more precarious position. Stock market indexes have rebounded, which should help to support household wealth, but the benefits will mostly accrue to the rich. Only about half of Americans hold stocks, the survey showed.

So even though personal income and personal savings rate increase, it doesn’t mean that the wealth inequality gap is closing. In fact, you could argue that the only indicator of whether the wealth gap is closing or widening is what percent of Americans hold investable assets.

What people forget is how bad the wealth inequality gap in America is. According to the St. Louis Fed, the bottom 50% of Americans own only 1% of the wealth, including 13.4 million families that have a negative net worth. It doesn’t matter how many stimulus checks you send to those 13 million families, it won’t pull them out of the dire situation that they currently are in. The checks help, but let’s not kid ourselves — they do not cut poverty.

So why exactly do I believe this stimulus package is a net negative for the bottom 50% of Americans?

Simply, the benefit of a stimulus check and unemployment insurance is drastically outweighed by the negative impact of inflation, both in consumer goods and asset prices.

All the academics, millionaire bloggers, and wealthy hedge fund managers get real mad when you start to disprove their narrative that the government is cutting poverty and showering money on people. Here is a generalized view of the problem:

It is that simple. The purchasing power of the U.S. dollar is being eroded away based on historical trends, but these massive stimulus bills (which now total almost $6 trillion in a year) accelerate the problem. As I said, the second the Senate voted positively for this bill, the government is further enriching the wealthiest people in America, while simultaneously pushing the bottom 40% of Americans into a worse financial situation.

I don’t want to present problems without solutions. That feels unfair and intellectually dishonest. So how do we solve the problem?

First, we have to help small businesses, the unemployed, and those who are struggling financially due to the economic crisis. We don’t do that by creating new money to inject into the system, but rather by reallocating the government budget from bad investments to good investments. The U.S. government wastes an ungodly amount of money each year. From defense to pork, there are hundreds of billions of dollars that can be reallocated for those in need.

I know people will argue that those activities will be difficult and arduous. Of course, they are. But just because something is hard doesn’t mean we shouldn’t do it. Politicians have been working on this latest stimulus bill for months, which would have been plenty of time to figure out a reallocation strategy as well.

Next, we have to significantly overhaul the financial education in our country. The lack of financial education must be a national emergency. Just as we are racing to roll out vaccines, we must race to educate our citizens on the dollar’s depreciating purchasing power, the value in holding investable assets, and why saving majority of your wealth is a losing strategy. This education will arm citizens with the tools necessary to improve their financial position.

Lastly, we should ruthlessly prioritize what is most important. Are we more interested in bailing out governments or are we more interested in helping people? Do we want poorly-run companies like airlines to be bailed out or do we want to bail out individuals? Will we cheer on the violation of our freedoms with lockdowns or will we encourage entrepreneurs and business owners to do what they do best: problem-solve.

The current situation is disappointing. We have a government that destroyed our economy, forced the most vulnerable in our society into a worse financial position, and are now showing up with a bad solution. It is like setting a house on fire and then showing up pretending to be the firemen ready to put out the fire.

They take the information that is force-fed to them by the propaganda machine and repeat it religiously. 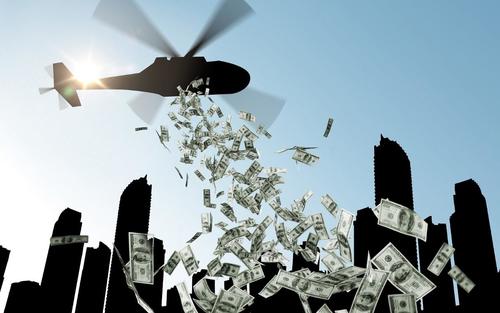 It is almost comical. My promise to you, the reader, is that I will always say the uncomfortable truth. I have significantly invested in bitcoin, which I believe will be the big winner in all this, which means that I will profit greatly off what is transpiring in the stimulus package. That doesn’t mean that I think the government is doing the right thing, nor does it mean that I think it will actually help the people who need it most.

However, it does mean that I recognize what is happening, what the consequences will be, and have positioned myself financially to not only be protected from the madness, but also to benefit from it. Each of you has the power to educate yourself and do what you think is best. Don’t wait around for anyone to save you. They’re not coming. You must do your own research. Think for yourself. And ensure that you aren’t exclusively exposed to any one way of thinking. Diversify your inputs to diversify your conclusions.