The US Has FANG, China Has A Booze Company

China’s equity market is increasingly dominated by just one stock, and that makes gains in its benchmarks look precarious.

Liquor maker Kweichow Moutai has surged 20% this year to be worth $461 billion, in large part because mutual funds will lag rivals and lose clients if they don’t own it.

Moutai is now the 12th-largest listed company in the world. For comparison, that’s about twice as valuable as Diageo and Anheuser-Busch InBev combined. The stock accounts for 64% of the Shanghai Composite Index’s gain this year, up from 21% of its advance over the past 12 months. 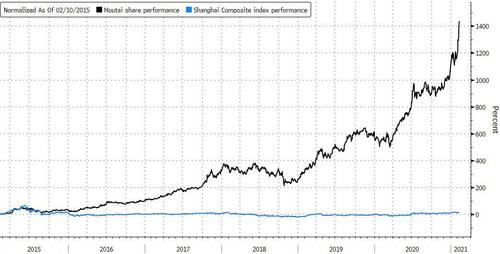 As well as betting that a stick-with-your-winners momentum trade will continue to be successful, investors are counting on what appears to be an implicit endorsement from Beijing.

That can be risky: last year, the stock tumbled as much as 8.4% after the influential People’s Daily criticized the high price of Moutai’s liquor. Back in November 2017, the state-run Xinhua News Agency said Moutai shares were rising too fast. The report triggered a plunge in the stock and a broader selloff. As illustration of the company’s rising profile, check out this rap video.