It’s time for Jeff Gundlach to regale DoubleLine fund investors and assorted hangers on with his views of the economy, the stock market and everything else. The title of the latest webcast is “Looking Backward” although we expect a substantial does of forward looking views and hot takes, including Gundlach’s inaugural assessment of the US economy.

Readers can listen to the webcast by clising on the following link or the image below. 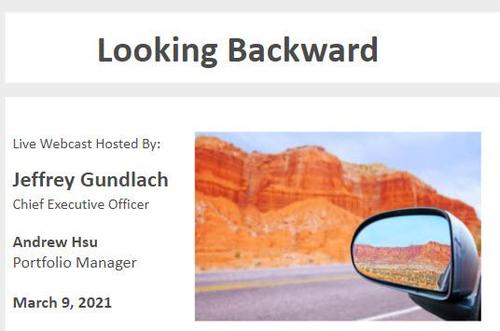 The last time we heard from Gundlach, financials were just starting to take off thanks to surging yields. But that was a much smaller move compared to the action we’ve seen since the start of February. Back then, Gundlach pulled up a chart saying U.S. banks are wearing a “normal scuba vest” whereas their Japanese and European counterparts act as if they have an “aqualung vest.” Why? He says negative interest rates. As we noted earlier, US banks may be forced to adopt negative rates as soon as April 1.

As Bloomberg also reminds us, last month Gundlach tweeted that he had been a long-term gold bull and U.S. dollar bear, but has turned neutral on both. Bitcoin may well be the “Stimulus Asset,” he said, a reference to the cryptocurrency’s rally amid a wave of cash pumped into the financial system during the pandemic.

More recently, he noted the divergence below, with Bitcoin rapidly outpacing both gold and the S&P 500’s gains over the past year, adding ominously, “Great dispersions often precede great reversions.” So will Gundlach announce his full-blown endorsement of the cryptocurrency? Stay tuned to find out.

We’ll update this post with periodic highlights from the webcast.

Gundlach explains the title of today’s webcast “Looking Backward”, which is a nod to a novel written in 1888, and where the protagonist of Edward Bellamy’s socialist-utopian novel goes into a trance in 1887 and awakens in 2000. Gundlach says the novel resembles situations in society today. In the novel the protagonist finds a year 2000 described as having shorter working weeks and equal distribution of goods. In the book, Boston is part of a totally changed world in which the U.S. has been transformed to a socialist utopia, which includes internet and full-benefits retirement at 45.

“So think about this as we go through some of the slides” Gundlach said.

Gundlach starts by showing a chart breaking down the US economy between Nominal GDP, Employment and market cap, with Technology “monopolies” clearly dominating. 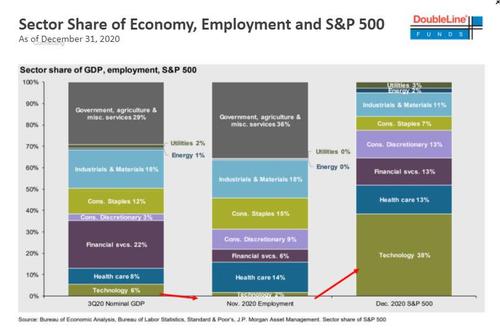 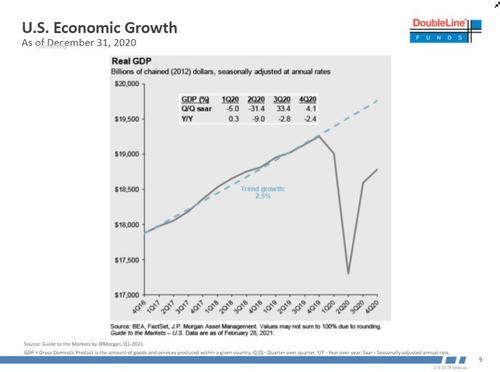 The DoubleLine CEO then shows just how much bigger the stimulus at $6.1TN is compared to the Great recession’s $1.8TN. 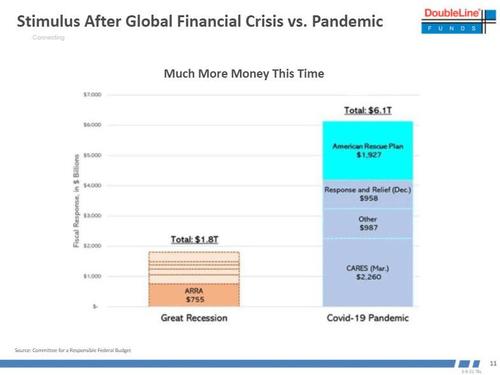 Gundlach then uses one of our favorite charts, the one showing that government accounts for a whopping 27% of all personal income. 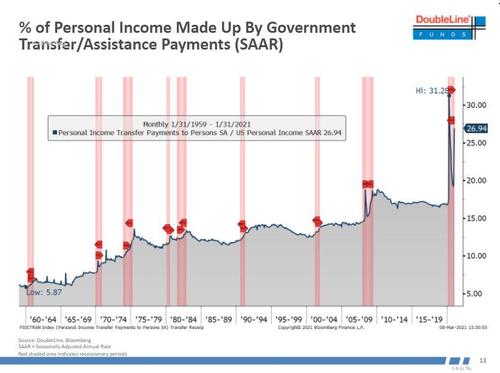 Of course, this socialism won’t come cheap and the US budget deficit has now hit a record 16.2% of GDP. 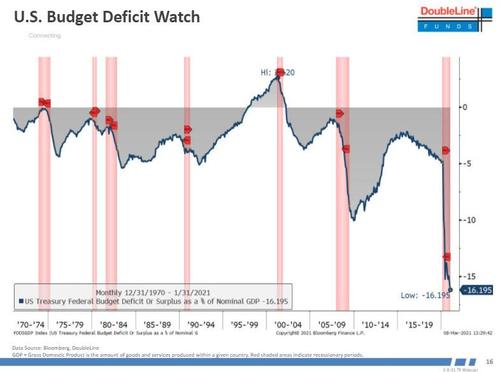 Echoing one of our favorite lines, Gundlach says that “80% of the budget is borrowing, so why bother with taxes at all?”

Next, touching on his view on the dollar, Gundlach says that while he has been bullish in recent months, he expects the next move in the dollar to be down. 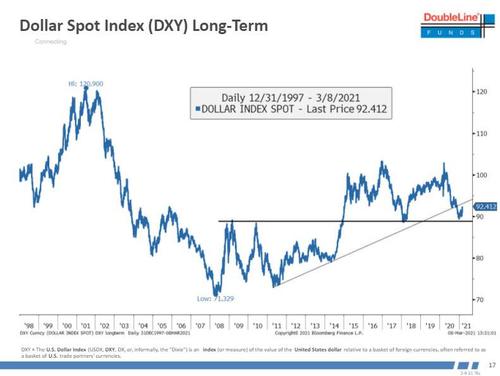 Gundlach, who is jumping around like crazy from topic to topic, then slams the “phony” 6.2% unemployment rate pointing to the true US unemployment which is far greater than the official 6MM print, as a result of more than 18MM people receiving various forms of unemployment benefits, more than 10% of the entire US labor force. 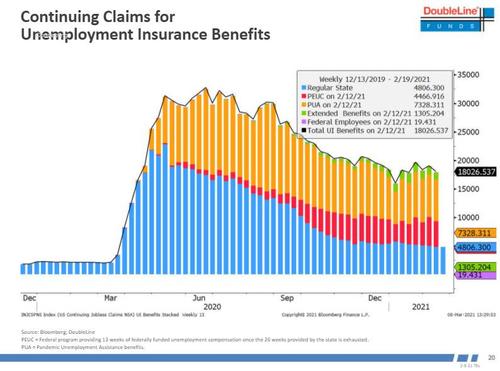 Going back to the stock market, Gundlach mentions the “super six” tech stocks again and says it’s amazing how high these stocks are valued versus pre-pandemic levels. He then shows surging P/E ratios, saying forward P/E ratios are elevated at 19 but not as high as 1999. Noting that Joe Biden is talking about increased corporate tax rates, Gundlach says P/E ratios could go even higher once that legislation is folded into the valuations.

Which brings us to one of of Gundlach’s most bombastic comments so far. Looking at the tremendous outperformance of mega caps relative to micro caps… 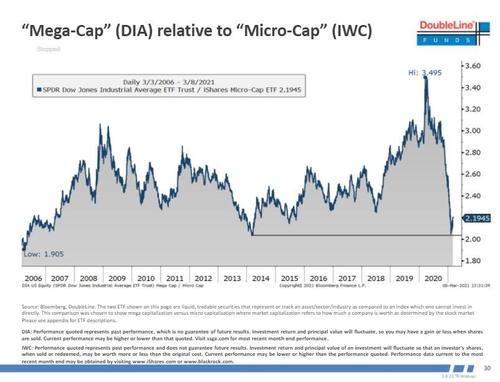 … and the tremendous gains in the Nasdaq vs SPX, which recently just took out the dot com higher… 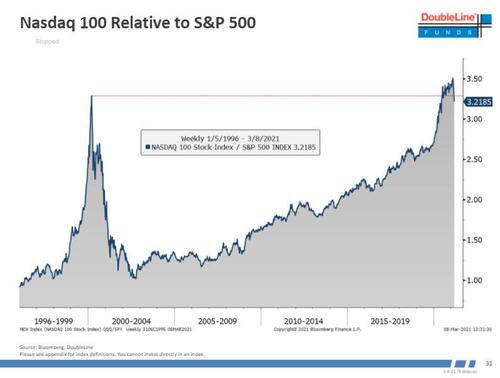 … Gundlach makes a shocking prediction, saying that said that “The VIX will go over a 100 during the next downturn”

What could cause such a crash? Perhaps inflation – Gundlach notes that he expects headline inflation to be over 3% for a few months this summer on the back of base effect and stimulus. 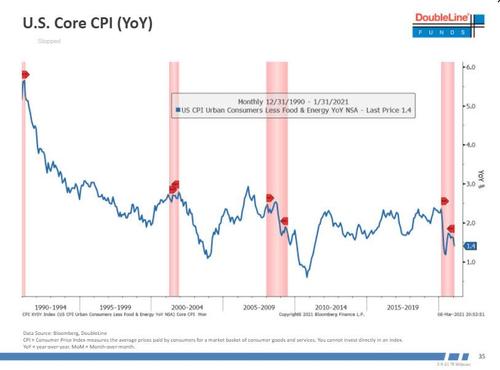 It could get worse: Gundlach compares CPI to ISM Prices Paid ans says that one could plausibly predict headline inflation could rise above 4%. “That would really spook the bond market.” 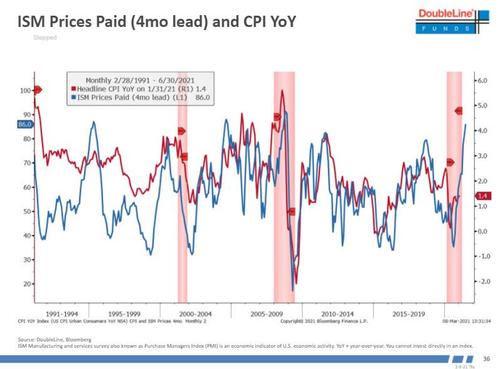 Luongo: What I Want To Know Is How Angry Are You, Really?