Authored by David Messler via OilP{rice.com,

Commodity prices have been on the rise since late in the 3rd quarter of 2020. Signs that the global economy would rebound faster than anyone thought possible, in the early phase, has spurred purchases of critical components in the modern economy. I have discussed the reasons for this in a couple of OilPrice articles recently.

In this article, “How High Will Oil Prices Go This Year?”, I discussed the impact the decline in drilling in shale plays was having on crude stocks, and resulting trend higher in prices.

In the second article, “How Much Higher Can Oil Prices Go This Year”, the concept of Backwardation taking control of the oil market was the principal thesis of that article. In this scenario traders pull oil from storage to sell now, as opposed to storing for better prices in the future.

Now we will tie this into the thesis proposed in an article last year near the absolute depths of the crash, about the start of a new commodities Super-Cycle. Now, going on six-months later, we are starting to see some evidence of the thesis put forward in that article that an inflection point was approaching that would shorten the time between the peaks and valleys of the multi-year cycle.

For example, precious and strategic metals have gone through the roof this year, figuratively speaking, and may have more room to run. The chart of the VanEck Vectors Rare Earth and Strategic Metals ETF, (NYSE:REMX) below shows how key metals have responded to the perception of a resurgent economy for 2021. You can’t build the battery for a Tesla, (NYSE:TSLA) or any other Electric Vehicle-EV without these metals. 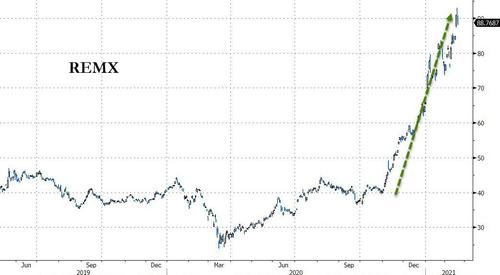 Conspicuous also, has been oil’s rise over this time period and captured in the Energy Select Sector SPDR fund, (NYSE:XLE). There are a multitude of reasons for the sharp turnaround in commodities and oil in particular, as noted in the chart below. Supercycles can be defined by their relatively low frequency and long duration, once they begin. Not every downturn in the business cycle becomes a depression. Similarly supercycles do not result from every upswing in commodity prices. What’s different about this push is the thrust of this article. 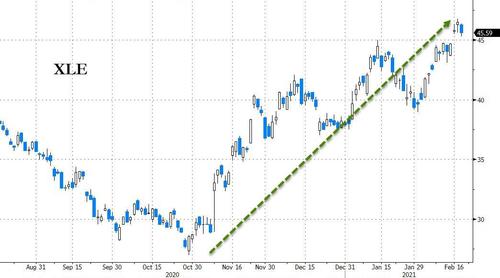 Last fall in the article on the possible initiation of a new commodity Super-Cycle I hit on several themes that in addition to a fall in oil inventories and a vaccine for Covid might provide the trigger for a demand driven rise in commodity prices.

India is growing by leaps and bounds

The first was the emerging industrialization of India. Mass industrialization of a region or economy is closely associated with the initiation of a super-cycle. This was documented in a 2013 book, “From boom to bust: a typology of real commodity prices in the long run”, by David Jacks, and quoted in a recent Reuters article. Jacks, an economic historian wrote that:

In the referenced tome, Jacks noted: “These are demand-driven episodes closely linked to historical episodes of mass industrialization and urbanization which interact with acute capacity constraints in many product categories – in particular, energy, metals, and minerals – in order to generate above-trend real commodity prices for years, if not decades, on end.”

Spurred on by its surging population- soon to surpass China’s, its high literacy rate, and growing middle-class that will comprise 68% of the country by 2030, India’s economy is forecast to grow 11.5% in 2021. This growth will take energy in the form of oil and LNG.

The energy transition is underway and needs capital

I documented that a tremendous amount of infrastructure spending would be required to replace aging roads, bridges, dams, even whole sections of cities themselves that were in need of renewal. One area in which I provided no discussion, was the transition that is underway from petroleum based energy to renewable forms-solar, wind, hydro, and biomass for transportation purposes.

We have passed the Rubicon in this phase of the energy transition. EV’s crowding out and replacing internal combustion engine cars is no longer a far-fetched dreamer’s notion. It is real. And, it’s happening at a rate that only reached full realization this year.

Driven by government edict and popular demand more and more manufacturers of Internal Combustion Engine-ICE, vehicles are committing to EV only fleets in the next 10-15 years. Joining Tesla, NYSE:TSLA) in the EV only category will be General Motors, (NYSE:GM), by 2035. Other major brands going all electric in the near future are Mercedes Benz, as well as BMW. Other car manufacturers will be sure to join this chorus.

The charging infrastructure support explosion of EV’s is expanding rapidly as well, and soon worries about where will a 200-300 mile recharge come from and how long will it take, will recede from the popular mindset.

What’s notable about this transition to electrification is that many of the large players are legacy oil companies like, Shell, NYSE: RDS.A), RDS.B), BP, (NYSE:BP), and Equinor, (NYSE: EQNR) are leading the charge. Capital is being diverted away from oil exploration projects to renewable energy projects. Both Shell and BP have told investors that they have reached peak oil as a portion of their portfolios. This is having the effect of stranding oil assets that might have been developed had capital been available.

As the majors daily production declines, the oil that is available will become more valuable, and drive prices higher. An odd juxtaposition for these energy companies, which a few years earlier would have ramped up spending to capitalize on higher prices.

One thing that will share the spotlight with Covid when the histories of the 2020 are written, will be the incredible amount of stimulus that’s been unleashed upon the world. Trillions upon trillions of dollars have been authorized by global governments to combat the deleterious effects of the Covid virus.

Massive stimulus is a strong harbinger of commodity super-cycles. Investment house, Goldman Sachs, (NYSE:GS) is on record as floating the notion of a stimulus led commodity boom similar to the Brazil, Russia, India, China-BRIC, boom of the early 2000’s. Goldman is quoted in the linked article as saying-

“Going green, Goldman Sachs contends, “has the potential to create a capex cycle on par with the emerging markets-driven cycle of the 2000s.”

Time will tell if the coming commodity boom in metals and oil turns into a genuine super-cycle, or just a temporary upturn as the world adjusts unevenly to the new green revolution.

One thing that is absolutely certain is that this transition to going to take a lot of energy, including energy from petroleum sources, just when they are starting to shrink.

Are Tesla’s Sudden China Woes A Harbinger Of Things To Come?

What Happens To Markets After Peak Inflation: Goldman Answers