The New York Times’ Hiroko Masuike captured customers at The Smith restaurant in Manhattan Wednesday evening, bundled up in winter jackets, underneath propane heaters on a sidewalk patio, while the first major winter storm of the season blanketed the city nearly one foot of snow.

Thanks to Andrew Cuomo’s decision to once again shut down indoor dining in New York on Monday, these patrons had to eat outside in the middle of a freakin’ snowstorm.

As the wind blew, the propane heaters appeared worthless as a few of the patrons were sipping on soup and have likely downed a liquor shot or two to stay warm.

Perhaps the patrons on Wednesday night were devoted customers supporting their local restaurants, rain or shine, considering a record number of eateries across the country can’t pay December rent.

As we’ve mentioned before, Goldman Sachs has noted that if daily average temperatures slide below 40°F – then it would be associated with a steep drop off in consumer activity at eateries. 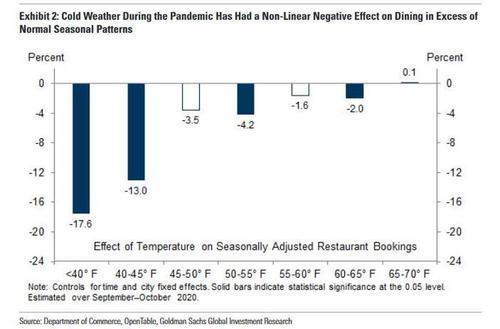 So back to the picture – patrons can thank the government for why they had to eat a nice meal outside in the middle of a major snowstorm.