For many legal analysts, President Donald Trump remains a type of criminal Midas figure: everything he says or does turns instantly into a crime. 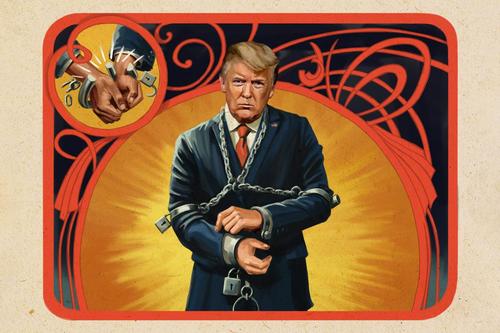 Over the last few years, the media has published a long line of unfounded criminal theories by experts claiming that a tweet or a meeting or a statement established a clear prosecutable case. It is a popular and profitable take with the media which has been feeding an insatiable appetite for such reassuring views.

Law has become a recreation and legal analysts have become part of the legal entertainment.

This pattern is continuing to the very end of the Trump Administration.

Within minutes of the leaking of a call between Trump and Georgia election officials, the same experts were declaring yet another clear crime.  The loudest was Andrew Weissmann whose desire to find a crime to use against Trump appears to move from an obsession to a delusion.  There may be evidence that supports a criminal allegation related to this call but the transcript does not come close to a prosecutable case.

Since his departure as the top deputy to Special Counsel Robert Mueller, Andrew Weissmann (now a MSNBC analyst and a NYU law professor) seems intent on proving his critics correct about his profound bias against President Donald Trump and his reckless approach to prosecutorial standards.  He recently called for prosecutors to use grand juries to pursue Trump and others in an unrelenting campaign based on unfounded legal theories.  His recent book has been denounced by other prosecutors as unprofessional and inappropriate.  Weissmann previously called on prosecutors to refuse to assist John Durham in his investigation and, after the pardon of Roger Stone, called for Stone in a grand jury. Now, he is insisting that the call with Georgia Secretary of State Brad Raffensperger is clearly a criminal act.  While I admittedly come to these questions from the counter perspective of a criminal defense attorney, the claim is legally absurd.

The Saturday call is now well-known, though few have actually read the full transcript. Yesterday, Raffensperger acknowledged that he made the decision to release the tape of a settlement discussion two days before the critical Georgia election. As a matter of legal practice, the taping (let alone the release) of settlement discussions is considered highly inappropriate. In some states, it would constitute a crime to engage in such nonconsensual taping. (Georgia is a one party consent state).

When the tape was released, many of us immediately criticized the statement of the President that “I just want to find 11,780 votes, which is one more than we have because we won the state.” However, experts immediately declared yet another clear criminal act and some members even called for a type of twilight impeachment in the last couple weeks of the Trump Administration.  Weissmann declared immediately that the tape showed “criminal intent” as well as “proof of his motive and his pattern of similar activity.”

The problem is that Weissmann again left the criminal code and controlling case law behind in his blind pursuit of Trump.  He was not alone. There is no established crime in this transcript under federal law.

As with the obstruction allegations investigated by Robert Mueller and the Ukrainian call that was the basis for the impeachment, this comes down to a question of intent. While most experts are notably vague on the specific criminal provision, one possibility would be election fraud under 52 U.S. 20511, which covering any person who “knowingly and willfully intimidated, threatens, or coerces, or attempts to intimidate, threaten, or coerce” any person exercising the right to vote. This was not a direct intimidation of a voter but it could be claimed to be interfering with that right.

However, such an interpretation comes to a full stop at intent. This was a settlement discussion over election challenges with a variety of lawyers present, not some backroom at the Bada Bing club. The entire stated purpose of the challenges was to count what the Trump campaign alleged were uncounted votes that surpassed the 11,780 deficit. Trump repeatedly asserted that he won the election and put forward different theories of how many more votes were destroyed or not counted. He continued to return to the fact that they only need to confirm 11,780 of those hundreds of thousands of allegedly uncounted ballots.

The Georgia lawyers on the call did a good job in rebutting Trump’s theories and showing that there are not hundreds of thousands of uncounted or miscounted ballots. Yet, in any criminal case, Trump would simply argue that he was restating the point of the pending cases in a settlement negotiation: that the election was not fair and that he actually won. That is a view shared by roughly 40 percent of the public. A prosecutor would have to show that Trump clearly knew that his theories were bogus and that he did not believe there were sufficient ballots to reach that number.  As a criminal defense attorney, I would view a case built on that line as not just challengeable but laughable.

Even if the prosecutors could find a basis for establishing intent, they would still be pushing fraud statutes beyond an intelligible limits without more direct evidence of intent.  Ironically, this is the very issue that marred Weissmann’s career and the reason many of us viewed his selection by Mueller to be an egregious error.  Weissmann was responsible for the overextension of an obstruction provision in a jury instruction that led a unanimous Supreme Court to reverse the conviction in the Arthur Andersen case in 2005. He proceeded to make the same exaggerated claims with Mueller (which were apparently rejected by the staff) and has continued to do so as a MSNBC analyst.  He seems impervious to conflicting case law. Even a unanimous ruling written by Justice Elena Kagan does not appear to narrow his reading of such provisions. In Kelly v. United States, the Supreme Court threw out the convictions in the “Bridgegate” case involving the controversial closing of lanes on the George Washington Bridge to create traffic problems for the mayor of Fort Lee, N.J., who refused to endorse then-Gov. Chris Christie. The Court observed:

“That requirement, this Court has made clear, prevents these statutes from criminalizing all acts of dishonesty by state and local officials. Some decades ago, courts of appeals often construed the federal fraud laws to “proscribe[] schemes to defraud citizens of their intangible rights to honest and impartial government.” McNally, 483 U. S., at 355. This Court declined to go along. The fraud statutes, we held in McNally, were “limited in scope to the protection of property rights.” Id., at 360. They did not authorize federal prosecutors to “set[] standards of disclosure and good government for local and state officials.” Ibid.”

Weissmann’s fraud prosecution would be based on a statement that could be easily defended as part of a settlement discussion over the findings of uncounted votes. There was no clear threat or benefit discussed. They were discussing what Trump was seeking in these challenges and his belief that fraudulent, and possible criminal, conduct marred the results.  One can reject those claims (as I have) without converting the matter into a faux criminal case.

Yet, readers are not satisfied with just a condemnation of Trump. They want a prosecution. To that end, another former prosecutor, Daniel Goldman, stepped forward to offer his own assurances of a criminal case to be made against Trump.  (House Intelligence Committee Chairman Adam Schiff previously hired Goldman, who previously called Trump a “shameful” person who “doesn’t care about the country” and who “ ‘looks bad’ because he committed a crime.”).   Goldman focused on the line “It’s gonna be costly to you.” Goldman declared “I’ve charged extortion in mob cases with similar language.”  In reality, the line was “it’s going to be very costly in many ways” which is very different than “it will be costly to you.” The extortion theory is the same basic theory that was raised in the impeachment hearing. I testified at that hearing and noted that this type of unhinged interpretation has been previously rejected by the Supreme Court. The House ultimately declined to adopt any extortion article of impeachment.

I would be interested to see the cases that Goldman charged solely on this type of line. The statement in a settlement that further litigation is going to be “costly” is hardly unprecedented.  Moreover, Trump can point what he said after that line: “I think you have to say that you’re going to reexamine it, and you can reexamine it, but reexamine it with people that want to find answers, not people that don’t want to find answers.” Yet, like Weissmann, Goldman wants the public to believe that this would not just be a good case for prosecution but not unlike cases that he personally prosecuted. If he did bring a case on that type of evidence, it is hard to believe it would withstand a cursory pretrial challenge.

Of course, none of this matters. That is just law.  This is legal entertainment. In the echo chambers of our current news platforms, such views are rarely challenged. Viewers hear what they hoped to hear from experts who are eager to supply endless theories of criminality. Of course, the same endless flexibility in the criminal code does not extend to figures like Hunter or Joe Biden.  Trump just has that criminal Midas touch.

2020: The Year We Sold Our Liberties For A Medical Tyranny

After Hours: Past, Present and Future (PODCAST)