Yesterday, the state of California extended its lockdown measures for LA County and the San Joaquin Valley as Joe Biden echoed concerns first voiced by Dr. Fauci about the vaccine rollout falling well behind its year-end target (while also warning that the outbreak is expected to worsen in the coming months). Today, Biden followed up by insisting that he will move ahead with ordering Americans to continue to wear masks in public for the first 100 days of his administration.

Once in office, I will be asking the American people to wear a mask for the first 100 days of my administration. Not as a political statement, but as a patriotic duty. pic.twitter.com/0Uayw4sAs7

Not much has changed over the last 24 hours in the US. While Texas reported a new daily record number of new cases yesterday (25K+), a holiday induced lag across states means the COVID Tracking Project still doesn’t have a complete picture of how infections, hospitalizations and even, in some cases, deaths have fared over the last few days.

Current hospitalizations remains the most stable state-reported metric during holiday disruptions, according to the CTP, and it will likely continue to be the best guide to reality until states work through all Christmas/New Year’s backlogs. 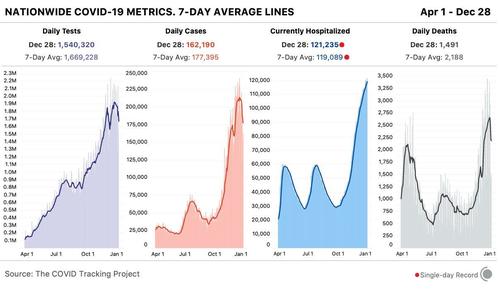 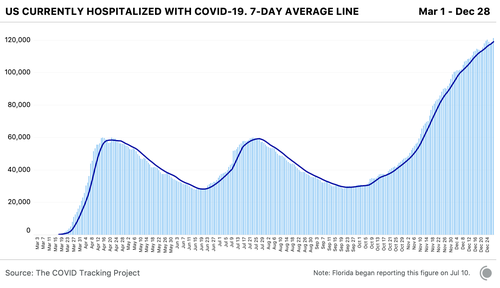 In Japan, Tokyo’s governor warned that the capital city could see an explosive increase in virus cases at any time, and that everybody is at risk of infection. Gov. Yuriko Koike added Wednesday after Tokyo reported a near-record 940+ new cases that residents must take precautions as Japan heads into the New Year holidays. Meanwhile, a member of a Tokyo panel monitoring the coronavirus outbreak in the capital megalopolis warned that the medical system there could face “collapse” given the pace at which the virus is spreading.

After the first case of the hyper-infectious COVID strain first discovered in the UK was confirmed in Colorado last night, it’s expected that more cases will be discovered in the US as the days go on. Meanwhile, in India, at least 20 such cases have been isolated, all tied to people who were recently in Britain.

With the UK already winning plaudits for its vaccine rollout (remember, it was the first to approve Pfizer’s vaccine for the EUA), regulators followed up on Wednesday by approving the AstraZeneca-Oxford vaccine. But the UK’s success (it’s expected to ramp up vaccinations to 800K/day) is also drawing more negative attention to the US, which is barely managing to vaccinate an average of only 200K people/day, with many states using only small percentages of their total vaccine store so far.

In other European news, deaths in Germany surpassed 1K in a single day for the first time since the outbreak began on Wednesday. Finally, Chinese state-backed vaccine developer Sinopharm released new data purporting to show its jab to be 80% effective, even as trial data from Brazil has provided some reason for doubts.

Chinese vaccine producer Sinopharm announced the inactivated COVID-19 vaccine it developed has an efficacy rate of 79.34%. Given its safety, easy transportation and storage, this vaccine will be very popular. pic.twitter.com/mNBY5ZT8T0

The Tyranny Of The “Enlightened” Experts