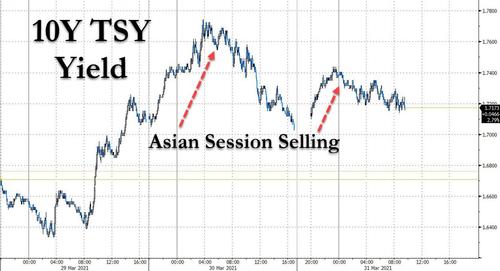 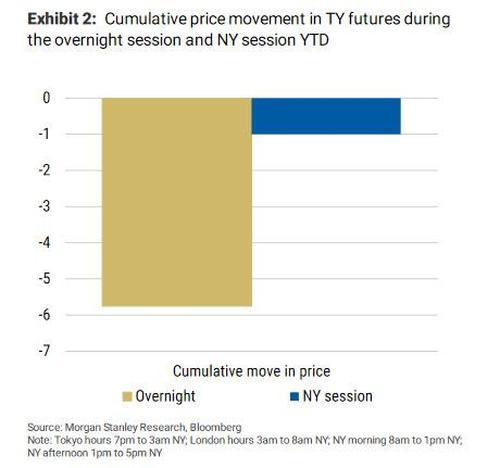 … as a result of aggressive dumping by Japanese commercial banks. 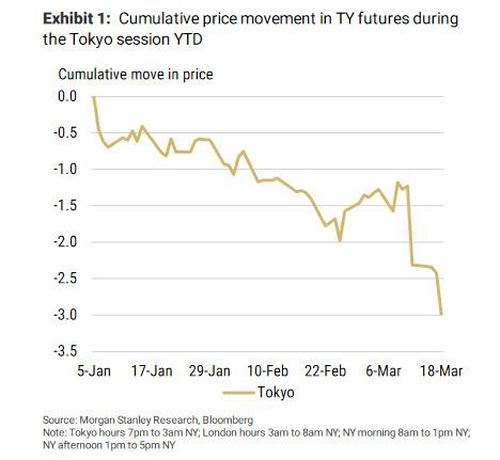 And while Morgan Stanley’s rates strategist Matthew Hornbach was optimistic in writing that “we have good reason to believe the selling from Japan won’t last… into April” because the fiscal year in Japan ends on March 31 at which point “liquidation of non-yen bond holdings should stop, if not reverse” overnight the BOJ rained on Hornbach’s parade when in a stark reversal from the recent acceleration of QE by the ECB, the Bank of Japan announced plans to reduce the total amount and frequency of its bond purchases in April from March, following its decision earlier this month to widen the target range of the 10-year government bond yield, a move which everyone (but the BOJ) conceded was implicit tightening.

The central bank will buy 450 billion yen of those maturities four times, which will add up to monthly total of 1.8 trillion yen. Until March, they were the tenors the BOJ used to buy the most, with the BOJ buying 420 billion yen of them five times a month. In April, JGBs with one to three years to maturity will become the biggest target of the BOJ’s buying. The BOJ said it reviewed the frequency and amount of bond buying for April taking into account demand for its operations as well as the market’s supply and demand.

Here’s a table comparing the planned purchase amount per operation in April and its frequency with actual total purchases in March. 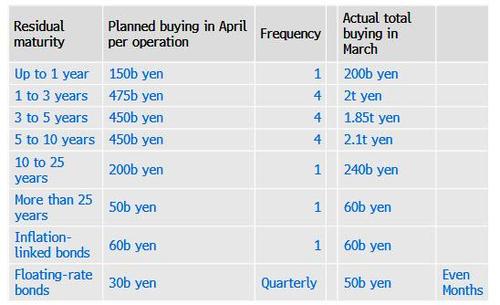 As a result of the quasi “taper,” the BOJ’s buying of conventional JGBs is expected to fall by about 9% to 5.9 trillion yen ($53.33 billion) in April, compared to 6.45 trillion yen in March.

The move, according to Reuters, underscored the central bank’s resolve to allow yields to fluctuate more around its 0% target, which was one of the key purposes of a policy review it conducted in mid-March.

Of course, it’s one thing for the BOJ to taper in theory and another in practice, which is why moments after the announcement, JGB futures tumbled 15 ticks to 151.00 in after-hour trading as the reduction was far bigger than expected. 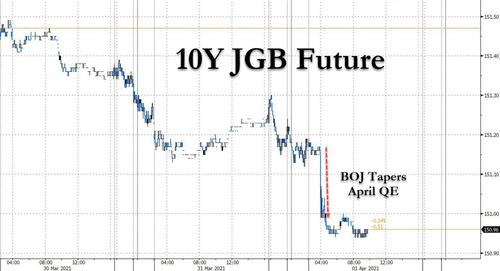 “It was a bit of surprise that the BOJ cut its buying in five- to ten-year bonds quite a bit, the maturity in which markets weren’t expecting the BOJ to reduce buying,” said Ryosuke Matsuzaki, market analyst at Mizuho Securities.

“It’s important to balance the need to maintain market functions and control interest rates,” a BOJ official told Reuters, adding the priority was to keep yields stably low as the COVID-19 pandemic weighs on the economy.

The BOJ slightly loosened its grip on long-term interest rates in mid-March and laid the groundwork to taper its huge asset purchases, as part of steps to make its stimulus sustainable enough to weather a prolonged battle to fire up inflation.

Sources told Reuters the BOJ will take a more hands-off approach in bond buying operations from April as it seeks to breathe life back into a market made dormant by its huge presence. Of course, all that means is that if and when yields spike as selling picks up, Kuroda will be right there to pick up the pieces as neither Japan nor any other developed country can risk another bond crash ever again.

“A Fake Candidate Who Didn’t Actually Run a Campaign – No Way He Got 81 Million Votes. It’s a Fraud!” – EPIC! Former GOP Spox Goes Off on Joe Biden Charade (VIDEO)